Dutchies through the front door to RIO! 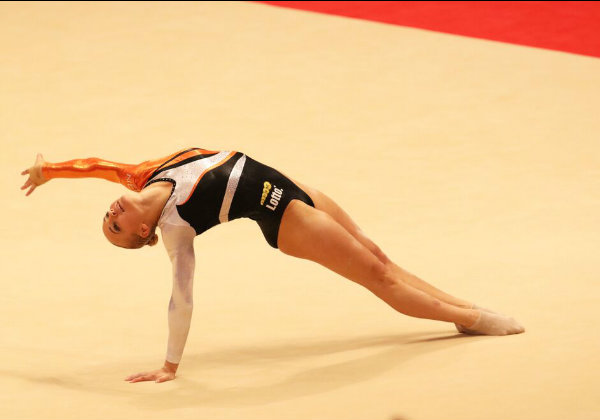 For the first time in forty years the Dutch will be at the Olympics with a team. They dreamt about getting the team through the test event in April next year, but they also had this “triple 2”  score dream. So they were aware that getting to this 222 team score was possible, but only with 4 by 4 hit routines. Their base goal was set more realistic: a score of at least 217 and to place 12-16th.

They were already praised after the podium training for their great artistry. But with not the highest difficulty they had to have a really clean qualification meet. And they had! The only minor issue was their second event, beam. Lisa Top started with a wobbly routine but stayed on. Only a 12.133 was her score. The rest had to do better to not get this score counted and next up was Mara Titarsolej. She showed a good program with amazing form, but unfortunately she had 3 falls. The rest had to do great and they did! Lieke scored a clean 14.233 and then Eythora had a clean routine were she made some good choices to not connect her elements because she felt a bit off. She still managed a huge score of 14.233 (same as Lieke). Because of the tie-break rule Eythora qualified ahead of Lieke as 8th into the beam final. The last gymnast was beam specialist Sanne Wevers. She has a nice program full of pirouettes, included her own “Wevers pirouette”. She also had been recognized and praised for this routine internationally. Though she never got qualified into the beam finals at Worlds with it. But finally with a hit the almost perfect beam set, and, with a 14.766 she is qualified second to the EF! If she does as great in finals as she did today, she might also include her risky triple pirouette then for a higher d-score.

The Dutch gymnasts themselves mentioned that at this point they felt that the two risky events were now over and all they had to do was to stay on their feet to place top 16. They all hit floor and the counting scores were between 13.508 and 14.200. There was a lot of jury discussion about the routine of Eythora Thorsdottir and it took some time before she got her score. Her D-score was lower then expected but she still received a nice 13.508.

The last event was vault. The fans had already calculated that they needed around 13.9 to place top eight. The gymnasts did not know, but Sanne Wevers saw the scoring board and asked the coach what event Brasil ended with. Beam was told to her and she thought now it might be possible to place top eight, because vault normally scores higher than beam. But with not really high start values it was very excited till the last moment. The first 3 gymnasts scored on and about 13.9 and the 4th, Eythora Thorsdottir, “only” scored 13.766. With the best vaulter, Lisa Top, as the last up, she needed to perform a clean vault to get Netherlands into the eighth position. Lisa almost stuck her handspring front tucked 1/1 for a 14.300 and vaulted therewith the Dutch team into the top eight!

Two subdivisions still to come, four countries that could grab this now beckoning Olympic team ticket. Even with these teams not looking stronger on paper then the Dutch team, it still were two nerve-racking subdivisons.

More than four hours later, the redeeming moment was there, for the first time since 1976 the Dutch will be at the Olympics with a team!

And not even this Olympic team ticket is the only result of this meet, the Worlds are not over!

With the team finals next Tuesday,  Lieke in the AA final on Thursday and Sanne and Eythora in the beam final there is still a lot to come.