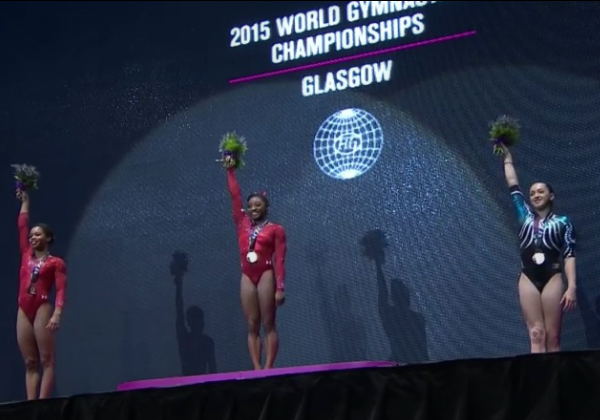 Simone had an average competition by her standards, and a brilliant one by everyone else’s. She took her 3rd Worlds AA the title with a 60.399. Her best routines were vault and bars, with a beautiful high Amanar and a nailed bars routine no hiccups on lower bar work this time. She had a big mistake on beam, grabbing the apparatus after a punch front, and on floor, where she went oob with both feet after the Biles-split leap. Still weighing in her difficulty vs her fabulous execution (with the exception of the two errors), she was still the best in the world, no doubt about that.

Team mate Gabby Douglas was one of the most consistent gymnasts of the final with 4 hit routines: she started with a stuck DTY followed by a bars routine without any noticeable errors ( but also a bit careful in her work, lacking the amplitude of her qualifications’ performance). On beam, she worked prudently and had a few minor adjustments, while on floor she stuck all her passes.

Romania’s Larisa Iordache chose the high road for this final, focusing on her gymnastics rather than on carrying the whole weight of Romania’s tradition on her shoulders. A solid BB (she started first) was the sign that she was going to factor in the AA standings and was not ready to go home without a fight. On floor she re-introduced the Silivas, hit her DTY on vault and showed a solid bars routine, bringing her AA total to a 59+.

China’s Shang Chunsong finished fourth, basically giving away the medal after an easier FTY vault. She worked with impressive consistency on bars (15+), no wobbles on her super-difficult beam (14.7) and only a step or two on floor.

Giulia Steingruber and Ellie Black had similar performances: started out with a fantastic vaults, survived bars without major breaks but gave away their medal chances on beam. They finished 5th and 7th respectively.

Mai Murakami of Japan and Laura Jurca of Romania finished 6th and 8th respectively after consistent executions but lower difficulty scores compared to their opponents.

Here are the complete results: