The Team Final: A fan’s perspective 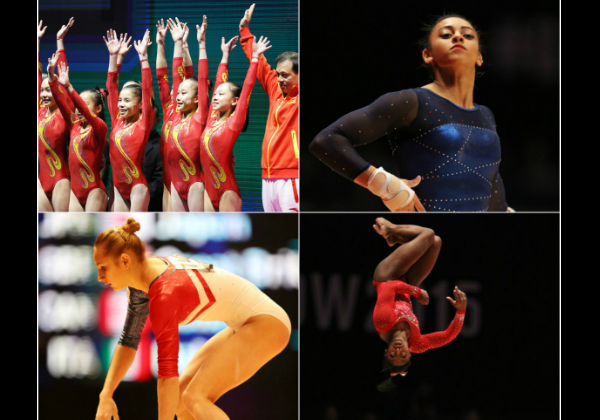 Lucas describes himself as a  a long time reader, rarely a commentator. Today he shares his 10 take-aways from the women’s team final at 2015 World Championships:

1) GB Bronze (and their vault rotation)

Probably one of the biggest (and anticipated) plot twists in the last twenty years of gymnastics, finally a team outside of the classic big four managed to get a medal in the Team Final. It comes from team GB after its journey of improvement in and after London Olympics. Capable of building a solid team with variety of skills and styles, Great Britain showed us that they are a force to be reckoned inside the very strict elite of countries capable of medalling in an Olympic Team Final. They are changing history by being part of what could be a new Big Four, or a better Big Five if Romania can put the team together in the next couple of years.

Not only the girls showed a solid and clean competition (with only one fall) but some glimpses of brilliance as well. We watched some great moments – like the obvious growing confidence of Amy Tinkler (best scores on floor and vault ever), the absolutely solid comeback of Ruby Harold (5/5 for her), Fragapane’s entertaining and powerful floor routine and some really special things from the Downie sisters. The two contributed heavily for the medal, with Ellie showing some amazing skills (like the outStanding Arabian and the powerful DTY) and with the reliability and class of the seasoned sister, Becky Downie – who always amazes with her acro series on beam, her crazy connections on bars and her poise and class..

After the thrilling vault rotation with three great DTY, the confirmation of the results brought a lot of emotion to the arena, not only among the team but around the coaches in the audience as well. We could see then how important this medal is for them and how hard they fought for a goal as big as that. We can only be thankful to team GB for showing not only a great show and strive but also for turning the team competitions to come even more close and thrilling.

Nichols’s performance in the team final enhanced the controversy of her staying out of AA in the qualifying round, as we watched her growing confidence and a 59+ in the rankings. Being consistent in all the competition and going for no major errors in any routine, it was in her last performance, the floor, that we truly saw her confidence and peak form shine, with several stuck landings, real smiles all over the arena and a big 15 to seal the deal. Well done, Nichols, Marta will carry the guilt for your non-silver medal all through her retirement.

3) Floor finalists plus one

Biles, Fasana, Miyakawa, Afanasyeva, Chungsong, Nichols and E. Downie. Seven of the eight qualifiers for floor finals gave us really strong performances and showed why they are the top tier for FX in the world right now. Biles is immense, we don’t even need to talk about her floor. Miyawaka is almost as insane as Simone, showing not only an unexpected consistency on her exercise but tumbling variety and one of the best front tumbling we ever saw as well. Fasana was able to pull off one of her season’s best, nailing every single landing. Afanasyeva showed some real fight for the team in the landings and was finally capable of showing (imo) some expression and flourish with her new and controversial choreography. The rest looks as confident and strong as the aforementioned field and the insane tumbling all over the place, like the Shirai-ish twisting passes from Chungsong and with lots of F acro and high stuck double doubles being threw like nothing.

Who is the plus one? Eythora Thorsdotirr, whose grace, style, choreography and excellent choice of music seems not to get tired to impresses me every time she’s performing, regardless of her being able to hit her spins or not.

That said, we can expect the best from the upcoming floor finals and a real battle for the top spots.

We saw a couple of great vaults from Canada, with Brittany Rogers fighting for a cold stuck in her great DTY (and screaming of joy after that) and Black being able to hit a front handspring with full twist for a masisve 15.1 – an all time high for her which enhances her chances in the AA final even more after a spetacular top 6 finish in the qualifications. It seems like this is The Year for her and I’m thrilled to watch Ellie growing so much on the sport.

Great to see China finally put an Uneven Bars rotation together and hitting three 15+ routines as it should always be. We just love to watch high releases with clean form and absolutely dead straight arms and handstands on one-arm full pirouettes going on forever. Maybe they should make a short movie of Chinese Ono and Healy turns going on screen for like 30 minutes, always looks so beautiful and so effortless.

Till her silly fall on Uneven Bars I was in amazement with Komova, with her much improved DTY for this season and with the IMMACULATE bars routine that was going on before the fall. Her new height and tall look allows her to reach new levels of fluency and elegance on this apparatus and I’m impressed to see how almost-straight her Jaeger is right now being given her height. I’m just hoping for the best for her gymnastics and mostly for her nerves as myself and all the gymternet would love to see her as a bars champion again.

Two reliable veterans, Paseka & Afanasyeva showed some great attitude and gymnastics towards the final and proved they’re absolutely needful for Team Russia right now. Paseka’s Amanar is looking great and i just don’t know from where that much height and left air at the end are coming, she just looks to be in her best form ever on vault. Ksenia performed a clean landing DTY and real fight for the team on floor. These performances build an interesting situation for Team Russia towards Rio Olympics, as they might need those veterans even more than the upcomers because the two of them are great on Russia’s lower score events, Vault and Floor Exercise.

After the rough start on Bars, it was great to see Ellie rocking the next three events and sealing the top three finish for Team GB with her utterly high DTY. In addition to a lot of emotion from her after the final results (which is always great to see from this absolutely focused athletes), we also had the treat to see her doing great arabians all over SSE Hydro Arena – in the form of two great tumbling on FX and in the ridiculously high outStanding arabian she performs on beam.

It’s the same every year for quite some time right now but it’s always great to see how Biles is really writing history in the sport for her team and for herself as the most dominant force to be reckoned in gymnastics since the end of the URSS. Not gonna extend this anymore as we’ll have plenty of stuff to say about Simone after AA finals.

She kinda looks cute even with this I’M GONNA KILL EVERONE IN THIS ARENA facial expression before her floor exercise in Team Finals. It may look just an angry girl but she shows with that a lot of character and a willing to fight. Besides that, she performed a solid routine with controlled landings for the team and maybe we will see a better Seda growing after this worlds.

Previous Photo: 2016 Worlds All Around Final
Next 2015 Worlds: AA Results