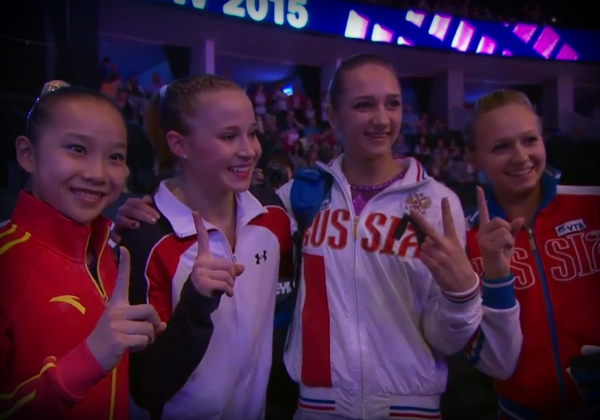 The vault final at the 2015 World Championships was packed with everything that makes up good TV: brilliant vaulting, good variety skills, scary falls and controversial decisions.

Alexa Moreno was first up and she did first a Rudi (6.2 difficulty), a bit short and with a big step on the landing, followed by an even shorter double twisting Tsukahara (clearly not round) but she was awarded the full value of the vault.

Hong un Jong: a beautiful Amanar with straight form in the air and good landing (if slighlty to the side), followed by a Cheng, with a bit of a direction issue and a step back on the landing. But the form achieved and the straight knees were quite impressive. Her two scores – 15.666 and 15.600.

Giulia Steingruber:  Immense Rudy with a tiny hop on the landing and with a -1 deduction for stepping outside of the line, but great work with shoulders up. She then missed the last half turn of her DTY and unexpectedly landed just a 1 1/2 on straight knees, injuring herslf. Giulia was carried out of the arena on a wheelchair, hopefully nothing is broken.

Paseka received a 15.633 for her first vault, a Cheng, messy legs on block and flight but landed well. Followed by an Amanar with a split legs but down the middle and well-round. Taking the lead from Hong un Jong – 15.666.

Wang Yan started with a very good double twisting Tsukahara, landed well but with a slight pike of the hips in flight. 15.066 (6.0) but “undercooked” the 2nd vault, a Rudy and put her hands down.

Simone Biles was up next: she managed to block well and achieved super height on her Amanar, with a hop on the landing – 15.9/ 6.3.  She maintained her focus and a straight body for an almost perfect layout Podkopayeva. But was Simone’s almost perfect execution was not going to be sufficient to compensate for lower difficulty: just a 15.183/5.6 for an average of 15.541.

Dipa Karmakar – managed a Produnova with feet down first but her bottom clearly touched the mat 15.3/7.0. Her second vault was a double twisting Tsukahara, not fully round and she had to take a few steps to the side, stepping outside of the competition area.

Finally time for the uneven bars final. This was going to be a packed battle between specialists Spiridonova, Scheder  and Kocian. Komova or Douglas also having potential to medal provided that they HIT and with the Chinese Shang and Fan and the Brit Ruby Harrold always able put themselves in the fight for the podium if the others were not perfect.

Shang Chunsong opened the competition with a beautiful routine especially impressive in Shaposh to inbar Geinger, L grip pirouetting to Jaeger release. She dismounted with a full in (step on landing). 14.9/6.7

Sophie Scheder had a wonderful time out there, with the exception of the dismount a full in landed low, with the knees almost touching the mat 14.6/6.6

Fan Yilin: a packed routine on the low bar and not much to deduct, – Pak – Shaposhnikova – inbar Geinger, beautiful L grip work and  a double layout dismount. 15.366/6.9.

Vika Komova in purple hit a flawless routine. Komova II to Pak to Komova I, layout Jager, toe on full pirouette to pike Tkachev to half turn to immediate full in stuck. 15.366/6.6

Gabby Douglas – a clean routine for her with a tow on full turn to pike Tkachev to Pak salto, followed by lovely lower bar work in a variety of grips and a stuck double layout to dismount 15.133/6.4

Madison Kocian up next started with a small hiccup and a missed connection after the first section of her low bar work, she picket up pace for the rest of her routine and hit everything onwards. Her score?  15.366/6.6 tieing for fist place!

Daria Spirinova, did her usual amazing work with extreme precision with the exception of a half turn slightly short and a tiny hop on the landing. 15.366/6.7.

Spiridonova joins the three at the top of the podium. All coaches and gymnasts are in tears with laughter and amazement.

Ruby Harrold hits her beautiful routine but she couldn’t challenge the top field due to lower difficulty. 14.766/6.3

So the 2015 Worlds bars final should be awarded the Nobel peace prize. I am not sure if it’s deserving of awards for good judging though, surely more could have been done to differentiate 4 performances

Previous In Pictures: Hong vs Paseka
Next Photo: 2016 Worlds All Around Final