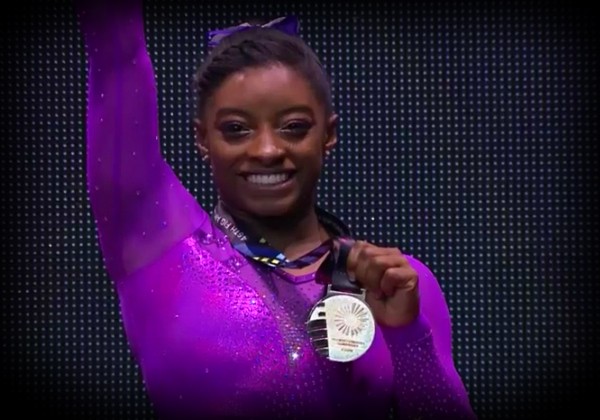 Beam. That time of the year again: the final where anything is possible and anything does happen. And this year was no exception bringing us yet another almost sad story. The good part is that everyone finished in one piece. The bad part is that the final barely had a history.

Eythora Thorsdottir was up first and you could just see hoe terribly nervous she was after almost missing the opening combo leap – side aerial – Korbut flick. Unfortunately the next move where she planned an Onodi to illusion, was decisive – she fell after the Onodi where she was completely off direction. A shame for such a gorgeous routine. The dismount was a 2 1/2 twist with a big step. 12.733/5.7

Team mate Sanne Wevers was up next and she was super nervous as well. But experience won this time and she managed to pull off her routine: double L turn (a bit short), two connected side aerials, aerial walkover, L turn simple (no connection), full turn to leap, So there were no major checks, just a tenth here and there on difficulty. 14.233/5.6 raised to a 14.333/5.7 after an enquiry was filed.

Wang Yan gave away her medal changes on the first big skill a flip with a half turn, she want back up and had another big wobble after the switch ring leap and then one more after the layout to two feet. She landed her triple twist dismount well but a 13.633 was not going to be enough for a medal.

Komova up next – L turn to mount was controlled well, the aerial walkover went well, and the series – flick layout stepout were equally beautiful. But the nerves were building: a standing Arabian followed by 15 seconds of arm waving as she  truly fought to stay on. She also fought well after the punch front, but the Y turn and the leap series were beautiful. A step back after the double tuck and a 13.933/5.7

Pauline Schaefer was up next and she attached the routine: switch ring leap (check) , flick layout stepout (big wobble), aerial walkover connected to side somi, beautiful dance section, amazing double turn, half tun to side aerial, and a stuck layout Gainer to finish 14.133/5.8

Ellie Black: should have shaken the nerves away with the double turn followed by pike front in the beginning, the flick – layout to two feet went well,  then went off on the  flick – full back tuck, she dismounted with a stuck 2 1/2 twist. 13.466/6.0

Simone Biles was the only gymnast to hit all her high difficulty elements: well controlled wolf turn, nice Barani, great flick- flick layout stepout, super series of leap, switch half to back pike, full in double back to dismount.

A shame really that we have not had the chance to see a beautiful beam final at worlds since the previous quad. Who is to blame, the code for asking too much, the coaches for not taking the memo that a well executed 6.0 routine will be enough. The gymnasts (except for Simone and Mustafina, the only ones with multiple medals in Worlds event finals on this event) for not having the mental strength to stay on when it counts. I don’t know but I wish this changed asap.

The floor final was going to be very competitive with multiple gymnasts posting 6+ difficulty for their qualifying routines.

Sae Miyakawa- full layout a bit low and a step forward but she made sure to fly high for the next of the tumbles –   straight front to double front step back, double-double on the third pass, stuck double layout to finish. An amazing routine.  14.933/6.3

Simone Biles: combination of straddle to wolf jumps to start, full in layout with a hop on the first pass, followed by her named after element, layout half out to split leap (stayed in bounds this time), a high Silivas on the third pass, with just a side hop on the landing and a full in to finish 15.800/6.8

Lieke Wevers danced her heart out again – her passes were double back and a 2 1/2 twist with a step, and she hit her beautiful and difficult dance elements:  double spin en attitude, a double L turn, quadruple turn. 14.100/5.4

Maggie Nichols had an “efficient” routine (in the words of Christine Still), she did a Silivas to open tuck and piked full ins and a double back to dismount with good landings throughout, she also did a fabulous job selling the routine with a large smile and a good presentation  15.00/6.2

Ksenia Afanasyeva: a difficult ring leap to start, double layout with a small step, double L turn, whip whip triple twist, pirouette en attitude to full turn, 2 1/2 twist to layout front to jump, double pike with a small adjustment to finish. She had a few steps on landings but worked with exquisite precision and virtuosity everything else. 15.1/6.4

Claudia Fragapane had a very dynamic performance but with small errors enough to throw her out of medal contention: super execution on the full in double back in layout position, a double Arabian with a step forward, a good triple full and an overcooked layout to two feet for the last pass (step oob) 14.466/6.2

So this concludes the women’s competition at the 2015 Worlds – the last one was an amazing final with all the gymnasts throwing their best on the day, well executed elements throughout, gymnasts that showed tremendous pleasure and excitement competing. A joy to watch.

Here are the results.