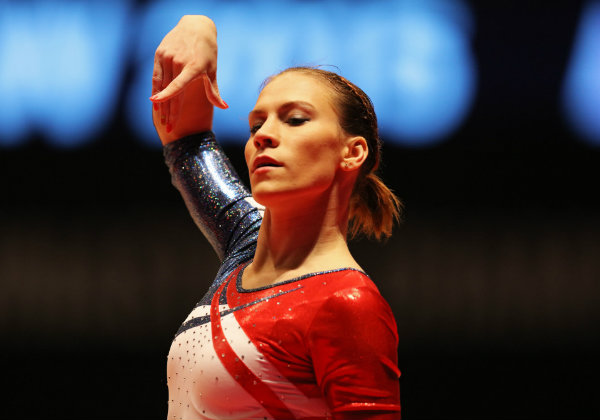 Without Aliya Mustafina but with a very experienced team that included three London Olympians (Komova, Paseka and Afanasyeva), two individual European Champions (Spiridinova and Kharenkova) and a new senior (Tutkhalyan), Russia entered the World Championships as one to watch for several finals.

During the qualification round everyone lived up to what was expected from them. Maria Paseka qualified into the vault final in 2nd place, Daria Spiridinova and Viktoria Komova advanced into the bars final in 1st and 2nd place, Seda Tutkhalyan and Viktoria Komova advanced to the beam final in 4th and 5th place and Ksenia Afanasyeva advanced 4th to floor. In addition Seda advanced to the AA final in 7th place and as a team they qualified second behind the USA, plus Maria Paseka and Maria Kharenkova were both bumped out of the bars and beam final respectively because of the two per country.

For the team final, Russia had qualified second with a consistent performance but the performance of other countries had to be counted in order to assess how much of an opportunity they would have to keep that place in the actual final.

The story of the qualification round was Romania’s catastrophic meltdown, while the team had been showing signs of trouble no one expected the team to completely face out from the team final; after all in Nanning 2014 Romania also had a poor qualification result but in the team final they finished fourth by a difference of 0.5 after counting a fall. With Romania not qualifying to the final, Russia had one less rival.

China had qualified in what seemed a distant 4th place, but the truth behind the low placement was plenty of falls absorbed by immense difficulty. Perhaps it was not very clear after qualifications but a consistent Chinese team could easily overtake a consistent Russian team, proof of that was the difficulty values for both teams during the team finals. China added up a 74.8 difficulty score against Russia’s 71.6. So Russia was realistically battling for bronze and it was against the host country, a rising powerhouse in gymnastics that had outscored them last year at Europeans.

The Russian team had key points to overcome in order to win bronze; they needed Paseka to land her Amanar, all of them needed to do their absolute best in bars to be able to absorb any falls from the beam, since beam is their weakest event and not necessarily because of difficulty but because of consistency, and to finish they needed to get through floor with decent landings as their difficulty scores were not high enough to make up for any falls.

The first key point was greatly achieved, Maria delivered one of her best Amanars, and so they moved on to bars and started well until the last routine when Komova fell on a pirouette and then had a bad a landing. The so-much-needed tenths to cushion any falls on beam were gone and the mental state of the team started declining as the first fall had happened. So with no back-up for falls on beam, the team went on to fall on all three beam sets, Seda survived her layout full and the rest of the routine only to fall on the dismount, Maria Kharenkova survived her acrobatic series that had so much troubled her in the past but then fell on an L-turn, and finally Komova fell on her standing Arabian, a rather inconsistent skill for her. And so after counting four falls they moved on to floor where they did achieve the key point to be consistent with decent landings, but by then it was too late. After 4 falls, the team finished 4th by a 0.416 difference.

The result says so much, it shows that the team is so talented and has huge difficulty that 4 falls left them less than half a point behind the bronze; but it also shows that difficulty won’t win unless there is consistency.

Russia had no real medal chances in the all-around so four clean routines was the only goal, however Seda found her undoing once more on beam. Would she be able to redeem herself in the beam final after two failed routines?

In the first day of event finals, Maria Paseka competed the same two vaults as Hong Un-Jong and with execution making the difference she crowned herself vault world champion. With these vaults she closed her performance in Glasgow making herself a strong candidate for the Olympic Team, as she proved she was trustworthy in a much-needed vault by the team and also that her execution has improved, enough to make a difference between gold and silver, plus she has served the team on bars and floor as well.

In the uneven bars final, the unthinkable happened and a four-way-tie for gold was produced, with two Russians among those four. Both Viktoria Komova and Daria Spiridinova carried on the strong legacy of Russian gymnastics on bars. For Viktoria Komova it meant regaining the title she had won four years earlier in Tokyo 2011 and for Daria Spiridinova it meant turning her European Title into a World one.

In the beam final Komova fought to stay on the beam during the standing Arabian and scored a low 13.933, however had she managed that same routine during the team final, Russia would’ve won bronze. Unfortunately Seda didn’t get redemption, falling early in the routine and scoring the same as she had in the team competition.

In the floor final, veteran Ksenia Afanasyeva, once again delivered what was expected from her with a beautiful and well executed routine that earned her a silver medal. And with that result  Russia left Glasgow with 4 medals, three of them gold and one silver; an excellent result for such a beautiful and talented team but a team that can achieve much more in Rio 2016.