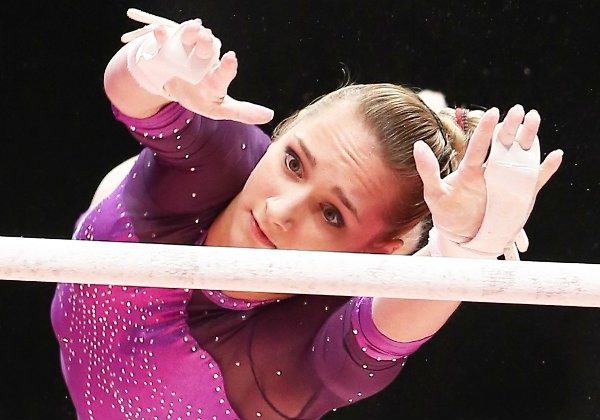 Now that we’ve all begun to objectively process the 2015 World Championships and heal from the withdrawal, Bea and I feel it’s time to highlight some of the performances. Over the next week or so, we’ll talk about some of the biggest disappointments and unsung talents, but first: the best performances…

(A note before we proceed: this is not meant to be an exhaustive list, nor is meant to be a definitive one. I did not simply choose those who won gold medals on their events, because to do so would have been rather dull. Nevertheless, I did choose routines that were high-scoring under the current code, so you won’t see anything about Eythora Thorsdottir, Erika Fasana, or Shang Chunsong here. Their praises will be sung soon.)

This one probably goes without saying, but no “best performances” list would be complete without it. If you want to know why Simone is so dominant, so amazingly or frustratingly removed from her closest rivals, you need look no further than her floor routine. If another gold-medal AA threat had performed an Amanar in Glasgow (and I think it’s safe to say we’ll see more of that in Rio), the gap would have narrowed, because despite her great execution and nerves of steel, Simone is comparable to her closest rivals on bars and beam. The gap would have narrowed, but it wouldn’t have closed, because while most are praising the gym gods for a mid-14 on floor, Simone is flirting with a 16, a score that a few hope for on vault but most never dream of on floor. Even when she messes up (as she did in this year’s AA Final) she can afford it with a 6.8 D value. Just incredible.

This performance may have been lost amidst three 15 + routines from the Chinese women in the Team Final and a four-way tie for gold in the Event Final, but it shouldn’t have been. High and flighty and meticulously clean, Gabby’s routine earned the highest bars score of the night in the Team Final and sealed the hope that Team USA might be in the midst of a bar renaissance, the routine coming as it did from someone who is not primarily considered a “bars specialist,” at least not in the same way that Kocian and Dowell are. It’s also worth mentioning that this score is just a hair below the one that proved gold-worthy for four women just a few days later, and that’s with a start value that’s two tenths lower than the next-in-line. I love this routine as it is (especially the sweet time she takes on her low bar stalder work) but I hope she finds a way to increase its start value while continuing to play to her strengths.

In the company of Simone, it wasn’t the best in Glasgow, but Simone already got a shout-out and Paseka’s vault was superb. If the isolated performances were praise-worthy (high, far, clean other than the block, landed upright and fairly secure, consistent), then the evolution of her Amanar was even more so. In my view, she wasn’t ready to perform that vault in London and her performance at the 2013 European Championships suggested the same. Since then, however, she has steadily improved. The vault has become more than something to simply absorb some of the hit taken from Team USA in the rotation; it’s actually a delight to watch. Hopefully we’ll see the same evolution of her Cheng.

Larisa Iordache, Balance Beam in the All Around, 14.766

In truth, I could have chosen her entire All-Around performance, but this routine will do. It epitomized the spirit of the gymnast and the particular circumstance, trying to reclaim some dignity for herself and even Romania’s program after a disastrous, historical defeat in the qualifications round. It was a tall order, and she had to begin delivering it on balance beam of all events. No problem for her though; moving with the same intensity of purpose that we’re used to seeing, Larisa confidently combined strong acrobatics with difficult dance, and capped it with a triple twist dismount. Her full-twisting back tuck was landed a bit untidily, but once she hit her layout and double turn, I sensed that she was on for the rest of the meet, and she was. Moving from 16th to 3rd place with a total score of 59.107, she reminded us that a really talented and charismatic gymnast sometimes has a really bad day, but it’s not the end of the story.

This was actually a tough call because her teammate, Daria Spiridonova, matched her score in the Event Final, beat it in qualifications, and delivered where Viktoria fell in the Team Final. Considering the evidence, I understand why some would put Daria ahead of her elder teammate on this “best performances” list; Daria’s bars routine was one of the very best in Glasgow, for sure. Following my self-imposed rule not to select more than one countrywoman on the same event, however, I choose Viktoria for a couple of reasons: first, I believe she had the edge execution-wise in the Event Final, and that’s where the specialists should be delivering their best stuff. Her pirouettes weren’t quite on top of the bar, but that was the only visible shortcoming I could discern. Everything else was truly state of the art: her in-bars, her catches, her lines, her ease and her delightfully dangerous use of time; nothing was rushed.

That would be enough to warrant inclusion on this list, but I must admit I also chose her for less technical reasons. Following the insensitive comments she made about her rivals on VK (most notably the American team), this performance was the first we’d seen of her since the drama unfolded. In the days leading up to this Final, she’d been very publicly accused on both English and Russian social media for her attitude and lack of responsibility. I joined the masses in their disappointment and their desire to see her make a genuine apology. And that she did, both publicly and privately. Without minimizing the insensitivity of her comments, I think we should be able to agree on the following: they were made in the heat of defense (as a skim of the VK conversation exposes) and she offered a vulnerable apology to the U.S. team. She said she was ashamed.

Notwithstanding her momentary misconduct, the fallout was undoubtedly a burden on her conscience and the source of some awkward training and elevator time, so to come out after all of it and deliver one of the best routines we’ve seen post-Olympics is really something.

Giulia Steingruber, Vault in the All Around, 15.600

For a hot second, it looked as though the reigning European Champion was poised to make a big, all-around statement on the world stage, starting as she did with this mammoth of a Rudi. It’s too bad she lost it on balance beam (and then later on her DTY in the Event Final) because this vault is special. She has perfected it over the course of many years, and as it has become stronger and stronger, so has Giulia’s all-around game.

She didn’t quite match the routine she gave here in the Event Final, but the latter was still good enough to win an historic silver and the qualifications routine set her up as one to beat. She didn’t execute major acrobatics, there was no standing Arabian or round-off to layout, but from her first element, a double L turn, she introduced the style of her routine and then executed it almost to its finest. Along with her compatriots on the Dutch team, Sanne is not only delighting but winning with a method that relies more on rhythm and unique connections than anything else. It’s certainly a treat for her audience, and it’s a routine that’s she’s been hoping to execute for some time now. She finally did.

Oh, and she can do a triple turn, which is probably why that double looks like a (stylish) walk in the park.

Those are my picks for “best performances,” at least in a bit-size portion. Bea, what do you think? And moving us along, where were the biggest disappointments?