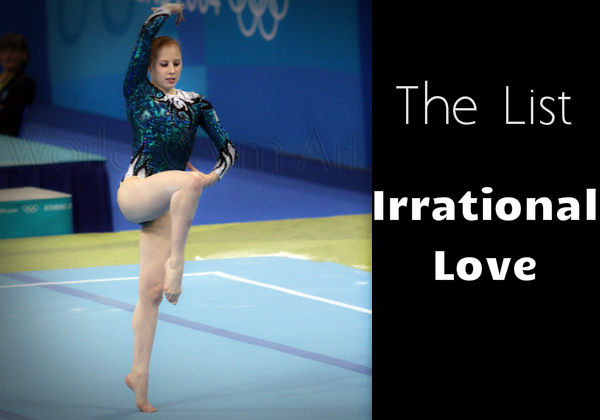 Gymnastics is a beautiful sport, full of ambition, talent, hard work, and desire.  As fans, we come to appreciate the gymnasts who rise above, set new records, and bring the sport to a new level.  Sometimes, though, there are gymnasts we love, no matter what.  Even if they don’t win the medal or earn the title, they are the ones we always pull for and enjoy watching no matter what.  Perhaps they won the big medals, but our focus was not only their results, but our enjoyment in seeing them perform.  My list of personal favorites aside (Comaneci, Zmeskal, Podkopayeva, Mustafina, and Sui Lu), here are some gymnasts that really captured my heart and keep me excited for the sport!

Before gymnasts were known to have long careers, Kathy transcended everyone’s expectations by competing throughout the late 1970s, continuing after the boycott of the 1980 Olympics, making the Olympic team in 1984, and winning two medals at the Los Angeles Games.  A beautiful, balletic performer who started gymnastics quite late in life, Kathy was always a lovely young woman.  She presented herself well on the competition floor and was well-spoken in interviews afterwards.  She helped set the standard for the future of USA gymnastics by accomplishing some of the best results for an American at world competitions and being well received by the European gymnastics community.  I have several favorite moments of Kathy (when she won the American Cup, when she battled back from a fall to make the 1984 Olympic team, when she won a bronze on beam at the Olympics), but here is a video of her from the 1978 World Championships, where she placed 8th (highest finish ever for an American at the time).  Her original floor score was 9.750, lower than Nadia Comaneci, who competed before her (and who the crowd felt was over scored).  The crowd, though, did not agree with Kathy’s score, and they protested so vigorously for ten minutes that the judges raised the score to 9.900!

The inspiration for this list, Heni was a true gem of the 1989-1992 era (and she even made a comeback in 1996 for her team!)  Both a trickster and an artist, Henrietta was truly a crowd pleaser.  She also had such amazing skills and technique that the judges couldn’t overlook her, even though she was from an unheralded team.  She won a European title in 1989, and a World and Olympic title in 1992.  While some meets were not her best, due to injury, she always prevailed in crowd’s mind.  Her ready smile and apparent joy at competing were truly special to witness.  I love each of her optional floor routines in 1992, but here is her compulsory floor at the Olympics, which showcases her ability to make each routine her very own.

One of the first stars of the independent Russia, Dina served notice in 1994 when she placed third in all-around, won the floor title, and beat Shannon Miller at the Goodwill Games.  The first to perform a full twisting back handspring on beam, Dina also showcased uneven bars transition when most just hopped from the low bar to fulfill a requirement.  Though she was a weak vaulter and eventually overshadowed by her teammates (Khorkina, Galieva), Dina carried an old-school sensibility to her gymnastics while giving it a modern flair for the new generation.  Here is her World title winning beam routine from 1996, the first such title for independent Russia (with commentary by none other than Kathy Johnson-Clarke!)

Never an Olympian, Meng Fei was an important part of China’s success at the 1995 (silver) and 1997 (bronze) World Championships.  One of the few gymnasts to try a Mo salto in competition, she also brought superior toe point, precision, and dance to routines on beam and floor.  And while she was not a supreme vaulter, her handspring front pike barani was usually done to perfection.  Meng Fei was a quiet but captivating gymnast who always seemed to serve her team to best of her ability.  While she did not get the same press or success as some of her teammates (Mo Huilan, Kui Yuanyaun, Bi Wenjing, Liu Xuan), she is remembered fondly for her beauty, and she was always one I looked out for in competitions!  I couldn’t decide on one routine of hers, so here is a montage that beautifully captures the breadth of Meng Fei’s work!

One of the first stars of the Liddick-led Australian effort, Allana was an integral part of her country’s success, beginning with a 5th place finish at the World Championships in 1999 and qualifying a full team to their Olympics to a first ever team medal at the Worlds in 2003.  Allana helped secure that medal on beam, while the American team was finishing on floor on their way to their first team title in front of a home crowd.  That type of concentration and dedication was central to Allana’s gymnastics.  She was the first in her country to perform certain skills (Fabrichnova dismount off bars) and place in the top 10 at World and Olympic competition, but she also was the heart and soul of a revitalized program.  Watching Allana meant watching a gymnast who believed anything was possible, and she was going to go for it, no matter what!  Here is her floor performance from the team final at the Athens Olympics; not perfect, but full of grit and passion!

The reigning European champion has long been on my list of favorites to watch.  Everything she does is over the top (in a good way!).  Huge jumps and leaps, big tumbles, flighty and aggressive releases on bars, and of course her amazing Rudi vault.  Beyond being a powerhouse though, she also performs with confidence and style—head up and shoulders back, easy and pleasing to the eye.  I would show her vault from the all-around at the recent Worlds, but Sara just highlighted it (rightfully so!), so here is Giulia’s floor from the European Championships on her way to the title.

These are just a few of the gymnasts I have enjoyed watching throughout the ages, no matter what.  Some twitter mentions included Kyla Ross, Rebecca Bross, and Sabrina Vega.  Because we each will have our own personal tastes and styles, it is hard to come up with a comprehensive lists of favorites.  So keep The List going below—which gymnasts do you have an irrational love for and why?

Other articles from the series:

When you Cry, I Cry