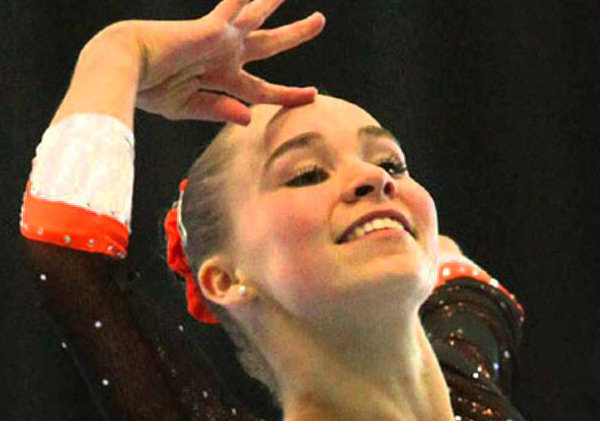 Hi Bea, I completely agree with your thoughts on Ellie Downie and Sae Miyakawa. They both gave dynamic performances, certainly worthy of a “Best Performances” list.

I also share your disappointment, with most of it coming in the qualifications round: The Romanian Team, Alexandra Raisman, Brenna Dowell: all fell short of attainable goals, whether barely or dramatically. It was difficult to watch. I tend to ache for any athlete who falls short, so my list could go on (probably starting with Ellie Black), but besides the Romanian qualifications performance and Brenna’s qualifications routine, my real heartbreak came when Russia unraveled half way through the Team Final. They had shown themselves much more capable at qualifications then what they presented at the main event. Maria Kharenkova’s misstep on balance beam was part of the problem, but it was only one amongst four missed routines. Furthermore, these were routines that were potentially excellent as opposed to passable: Komova on bars and beam, Kharenkova on beam, Thutkhalyan on beam. Instead, their best events proved to be their undoing. Thutkhalyan kept the heartbreak going in the Event Final, where she fell on the layout but then came back to nail the layout full. She qualified to that event in fifth, with a difficulty value that matched Simone Biles and Wan Yan, but she didn’t manage to capitalize, succumbing again to performances nerves.

Moving on, with your analysis of Ellie Downie and Sae Miyakawa, I have two less people to highlight in this piece, but I’ve selected a handful in addition to them. These are gymnasts who were close to making my “Best Performances” list. Though some of them are well known to the gym fan, they are relatively “unsung talents” to the average viewer.

Erika Fasana’s floor routine. It’s a pity she had to pull out of the Floor Final, because this performance would have fit nicely in an already stacked competition. What Fasana lacks in extension, she makes up for in power and confident landings. Her opening passes, a double-twisting double back and a DLO, are memorable. She’s made a lot of improvement over this last year.

Shang Chunson’s floor routine. In the Event Final, Shang earned a 14.933 with a 6.4 D value for this monster of a routine. Opening with a 3.5 twist to piked front, it was unique, ambitious, clean and seemingly endless (I always panic when she goes into that wolf turn right at the end). This was a real threat for a medal, and I imagine her fourth-place finish will remain a subject of controversy for some time. I’ll leave you all to judge for yourselves.

Carlotta Ferlito’s beam routine. Just missing out on the Beam Final, Ferlito nevertheless scored a 14.441 in the All Around Final, finishing only behind Larisa Iordache. There’s nothing particularly astounding or out of the ordinary in the composition, but Ferlito’s calm and measured execution of this routine makes it look much simpler than it is. You trust that she’s going to be fine, which makes watching her that much more enjoyable. (That and the eye shadow that matches her leo.)

Fan Yilin’s uneven bars routine. No one who wins a gold medal should remain an “unsung talent,” but I’m afraid that’s one of the downsides to having a four-way tie in an Event Final. Fan counted a few more execution errors than the women she shared the podium with (mostly noticeably her rhythm was a bit off, her feet a bit flexed), but she also executed some beautiful inbar work, completed a geinger, and pirouetted her heart out. She also had the highest D Score of the four champions.

Lieke Wevers’ floor routine. Notwithstanding the fact that some music is emotionally manipulative (like Lieke’s), this routine is truly beautiful. From her pirouetting onto the floor, through her relatively simple double tuck, to her turns en attitude, she tells a story. She didn’t quite make the Gomez (four rotations) in the Event Final that she hit in qualifications, but this routine was always more about ending her World Championships with grace than it was about climbing the podium. If she can upgrade her tumbling (even slightly) while maintaining difficult dance, she has a real shot at contending for world medals with this routine. This time around, it was simply a treat for the audience in a Final dominated by powerhouse tumbling and (with few exceptions) interpretation that left us wanting.

Eythora Thorsdottir’s floor routine. While we’re talking about emotionally satisfying routines and the Dutchwomen, why not throw in the fabulous Eythora, for me the epitome of an “unsung talent”? With lower difficulty, this routine isn’t especially competitive, but that doesn’t mean it isn’t absolutely delightful. Teammate Lisa Top outscored her in qualifications (a 13.700 vs. a 13.508) but Eythora was still used in the Team Final ahead of her. Why? I’m not sure, but I bet it had something to do with pure performance value. The Dutch team had already met their ultimate goal (qualifying a full team to the Rio Olympics) so the Team Final in Glasgow was less about coaxing out every tenth in pursuit of a particular placement and more about making an impression. And Eythora makes an impression with this routine. Give me a lovely Semenova turn and playful expression over half-baked full-in’s any day. I love this.

Well, that wraps up my “Unsung Talent” list. What would you add, Bea? And what are you final thoughts on Glasgow?