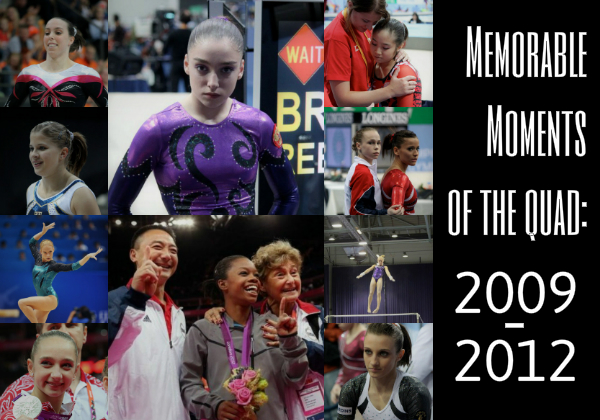 As we get closer to the Rio Olympics, TCG will look back at the previous quad’s most memorable moments. To begin, let’s look at the 2009-12 quad.  New world champions were crowned, past champions came out of retirement, and the faces on the podium at the Olympics were a blend of the old and the new.

Aliya Mustafina Revitalizes Russia (suggestion in part by @Kleon01) Since the retirement of Svetlana Khorkina, the Russian Federation struggled to get back on its feet and to top form.  After winning no medals at the 2008 Olympics, the Russian team showed up revitalized at the 2010 Worlds.  With strong leadership from veterans the Ksenias (Semenova and Afanasyeva), the newer generation of Russian superstars thrived.  In particular, the steady and sassy performances of Aliya Mustafina were a perfect blend of old-school Soviet styling with trends and difficulty that fit the new era of gymnastics.  Winner of five medals (two golds and three silvers), Aliya dominated the competition, leading the Russians to their first team title as an independent republic, winning the all-around for Russia for the first time since Khorkina in 2003, and qualifying for all four event finals (the first to do so since Khorkina in 1997).  Added to her story is her great comeback from injury in 2011 to her four medals at the 2012 Olympics.  All hail Queen Aliya! In royal purple, introducing her signature dismount on the event she eventually becomes Olympic champion on (again, the first Russian to do so since Khorkina).

Alicia Sacramone Becomes World Champion on Vault (suggestion in part by @GymnasticsRosie) Alicia’s main contributions to the sport were during the 2005-08 quad, which included three vault medals at Worlds and leading the team to world title in 2007.  At her Olympics in 2008, she won a silver with her team (despite her two falls) and finished fourth on vault, which felt a bit disappointing after a successful run at worlds all quad long.  So when she mounted her comeback in 2010, fans were excited to see if A-Sac had the same power and prowess on vault.  No disappointment here- her Rudi and double twisting Yurchenko in 2010 were some of the best she had ever done.  Her performance at the 2010 Worlds included a berth in beam finals for the first time in her career, but more impressively, she won her first ever vault world title.  While an injury in 2011 made her bid for the 2012 Olympics difficult, her achievement at the 2010 Worlds was a wonderful postscript for the career of a fan favorite.

(As an added treat, Alicia’s floor in 2011.  Because of her injury, we never got to see it on the world stage, but it is a beauty!)

The Emergence of the German and Japanese Team Two programs emerged in a significant way during this quad.  First, the German team, boosted by Oksana Chusovitina.  Back in the day, the East Germans were rivals to the Soviet Union and Romanians, but after the fall of the Berlin Wall, the program was not able to maintain their dominance.  During this quad, the German women saw new stars take the lead from Oksana and establish themselves as stars of the German team.  Notably, Elisabeth Seitz made a name for herself on uneven bars and contributed great all-around performances, especially at the 2011 European Championships where she placed second.  Her world all-around standing improved from 12th in 2010, to 11th in 2011, and finally 10th at the 2012 Olympics.  The team finished sixth at the 2011 Worlds, and supreme vaulter Janine Berger and veteran Kim Bui helped shape the team dynamic throughout the quad. Next, the Japanese team, which never achieved the same success as their male counterparts, saw solid moments and routines which gave well-deserved attention to their gymnasts.  In 2009, Koko Tsurumi won a bronze medal in the all-around, as well as a silver on bars.  In 2010, the team finished sixth at Worlds, then seventh in 2011.  Team Japan qualified two gymnasts to uneven bar finals at those worlds, and Koko Tsurumi qualified for her second Olympic event final on bars in 2012, where the team finished eighth.  Also at the London Olympics, Asuka Teramoto qualified eighth into the all-around final, ultimately finishing eleventh.  The presence of Japanese women in the finals at Worlds and Olympics became a norm. Release machine Seitz in 2010–

Favorites Crowned World and Olympic Champions While it’s hard to write about each singular achievement that we celebrated, several favorites emerged as world champions.  In 2010, Romanian beauty Ana Porgras brought the world title back to her country on their signature event. In 2011, Ksenia Afanasyeva wowed the crowd and redefined choreography with her floor routine.  A last minute replacement for Viktoria Komova, Ksenia took advantage of the opportunity with the last performance of the championships. Finally, in 2012, Sandra Izbasa once again stunned the Olympic crowd with her two stellar vaults, following the shocking fall from favorite McKayla Maroney.  Sandra cemented her legendary status in Romanian gymnastics by securing her second Olympic title. Other mentions—Viktoria Komova on bars 2011, Sui Lu on beam 2011, Aliya Mustafina on bars 2012, and Aly Raisman on floor in 2012! Enjoy once again the floor stylings of Afanasyeva!

**The Retirements of Ariella Kaeslin and Ana Porgras ** Unfortunately, this quad saw the retirements of several great gymnasts.  Ariella Kaeslin of Switzerland competed at the Beijing Olympics, and she seemed on her way to London.  She won a silver medal on vault, her signature event, at the 2009 Worlds, as well as three European medals during this quad.  An incredibly popular gymnast and highly regarded in Switzerland, she announced her retirement in 2011, effectively passing the torch to her successor, Giulia Steingruber. Unlike Kaeslin, Ana Porgras never competed at an Olympics.  Ana emerged in 2009, creating a huge buzz with her long lines and artistic flair.  Though lacking some power on vault, her grace, fluidity, and flexibility on beam and floor was swoon-worthy.  Despite a world title in 2010 and four World Cup medals, Ana shocked and saddened the gymnastics community by announcing her retirement seven months before the Olympics, citing an elbow injury. Montages for each of the gymnasts, following their retirements– By 1l0vegym–

**The Importance of the Amanar and the Produnova Debate ** Vault was transformed in this quad, as gymnasts were throwing risky elements that previously had been unusual.  Sure, several gymnasts performed the Amanar since its inception in 2000, but the explosion of Amanars shaped gymnastics in a new way by London.  If a gymnast could throw the vault, she was in high contention to make her country’s team over other gymnasts (Maria Paseka, anyone?).  And if your whole team can land this vault, then your advantage of the rest of the field was almost insurmountable (as in, “the United States of Amanar”).  Problems occurred, of course, with gymnasts getting injured on the tricky landing, or gymnasts trying to throw the vault prematurely.  The FIG recognizes the dominance of this one piece of gymnastics and lowered its start value in 2013. Another vault issue surrounded the execution (or lack thereof) the Produnova.  Even more elusive than the Amanar, Yamilet Pena of the Dominican Republic made history for her country, qualifying for the event finals at the World Championships and the Olympics.  Controversy followed her, however, as many were concerned that she was endangering herself by showcasing a vault that she clearly struggles to land with any consistency.  Cries for banning the vault and stricter deductions continue to follow Pena, and the Produnova, to this day. The Amanar, Maroney style–

The Produnova, to her feet–

The Rise of Gabby Douglas (suggestion by @peregrin33) At the Worlds preceding the Olympics, gym fans all over the world start lining up their favorites for Olympic glory.  The 2011 Worlds weaved a great story of Jordyn versus Viktoria, Maroney on vault, Sui Lu on beam, and other notable contenders and moments.  But few people walked away from the 2011 Worlds thinking, ‘My money is on Gabby Douglas to win the all-around Olympic gold’ (except perhaps @SpannyTampson, of course).  After a difficult US Nationals, many were actually surprised Gabby made the world team.  But she was solid for Team USA, helping them win the team title and qualifying herself for the uneven bar finals. At the American Cup in 2012, the pressure and attention was on reigning world champ Jordyn Wieber, as the audience was reminded that the 1976, 1984, 2004, and 2008 Olympic champions won the American Cup before their Olympic victory.  But quietly competing as an exhibition performer, Gabby’s scores were keeping her right alongside Jordyn, and by the end of the competition, Jordyn did in fact win, but Gabby scored higher.  When some thought that Gabby did well without the pressure of the competition, she performed strongly at the US Nationals (finishing second to Wieber after a fall on beam), and then won the US Olympic Trials over Wieber, securing the one guaranteed spot for the team.  The rest of her story, of course, unfolded into two golds in London. Gabby on beam at the American Cup–

Reigning World Champion Jordyn Wieber Not Making AA Finals at Olympics As gym fans, we know that we have to be ready for the unexpected, but people were shocked and felt tremendous empathy for Jordyn Wieber who, though qualified fourth, was third amongst her American teammates and thus left out of the all-around final.  While everyone knew that only two could qualify and that the US was putting up three all-arounders, it was widely assumed that Jordyn would qualify.  But there she was, trying to pull herself together while her friend Aly Raisman was being interviewed after securing her all-around spot.  Perhaps most upsetting to people was that Jordyn did not have a major mistake that kept her from qualifying; it came down to minor deductions.  Watching Jordyn come back and give everything to her team en route to becoming Olympic champions was a joyful moment for Wieber’s many fans and supporters. Montage of Jordyn by SuperGymmie, including her super classy interview after team qualifications–

**Beth Tweddle’s Olympic Medal on Bars ** And to end on a high note!  At her third (and final!) Olympics……after two world titles on the event……after being hailed as the greatest gymnast from her country, man or woman, in history……after not making event finals in Athens……after finishing fourth in Beijing…..in an Olympics hosted by her country…..Beth Tweddle wins an Olympic medal.  Brava, Beth!! Hear Beth reflect on her moment–

Four years is a lot to cover!!  Add your own significant memory and moment from this quad, and watch for the next piece covering the 2005-2008 era as we get closer and closer to Rio!  Tweet me @SuperGymFan with your suggestions!! #MemorableMoments

Photo cover: Brigid McCarthy, and from here and here

Previous NCAA Season Begins
Next Romania: Changes in the Team