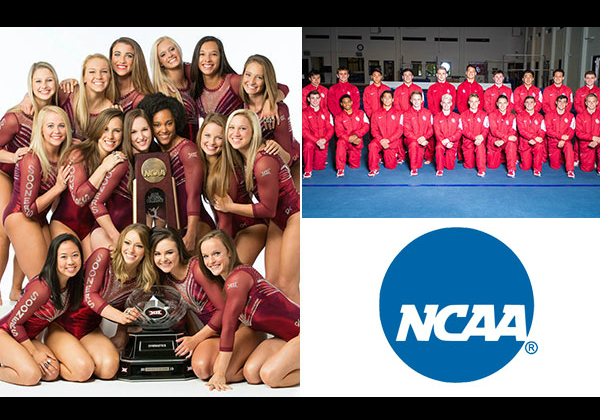 NCAA Gymnastics season will officially kick off this weekend.

RoadtoNationals.com has already released the coaches poll of the top 36 teams. Of these teams, the top ranked teams include: Alabama, Oklahoma, Florida, UCLA, Utah and LSU.

Florida is in the middle of it’s own dynasty, winning three consecutive national titles in the past four years, they were the first team to break into the Gymnastics Royal Four: Alabama, Georgia, UCLA and Utah, the only teams to ever win a national title.

They’re ranked # 2 behind Oklahoma, who won the title for the first time in 2014, in a tie with Florida.  Last year, they were out Bridget Sloan early in the season, but she came back in time for the Gators to pull off their third national title, beating out Utah by 0.05.

The Gators lost some pinch hitters in their graduated senior class, such as Kytra Hunter and Rachel Spicer, and they lost Rhonda Faehn, their head coach of forever, after being enticed by a position at USA Gymnastics. She was replaced by Jenny Rowland, (who was an associate head coach at Auburn and she helped that team get to the Super Six for the first time in a generation) and they have gained a powerful freshmen class that includes: national team member, Peyton Ernst and JO superstar Alicia Boren.

It’s going to be an interesting season to watch for Florida. In a lot of ways, this team could look like a baby horse that’s trying stand up for the first time. They’re going to be relying on their senior class, particularly Bridget Sloan.

Number one, Oklahoma. This year, they are sans seniors Rebecca Clark and Erica Brewer and without Brenna Dowell, who is taking the year off to pursue her Olympic glory.

Last year, the Sooners were undefeated in the regular season, but came in third place at Super Six due to some out of bounds by both Brenna and Ali Jackson. Considering top teams often start slow and work their way up and are suddenly winning everything by Super Six. But, with them already being favored to win, they’re going to have to keep the pace and make sure everybody is still in one piece by April.

They’re known for their glorious beam work, and the beam line up includes the magnificent Chayse Capps, whose artistry inspires shakespeareesque prose and sonnets. The star of this team is most likely senior Haley Scaman, who is a pinch hitter on vault, bars and floor, capable of scoring well into the 9.9’s+.

Then there is LSU. Last year, like Oklahoma, you looked fantastic in the regular season. But, at NCAA semi-finals, a melt-down on the beam ensued. Everyone fell on beam, including Rheagan Courville, Liomencia Hall, who were usually super consistent  and reliable athletes.

The disaster is now behind them and the question is: could LSU finally break in and make head Coach, DD Breaux’s dreams of an NCAA title come true this year? After last year’s NCAA, disaster, they want it even more. The team is guaranteed to put up a good fight.

This year, they have an impressive group of freshmen to fill the shoes left by Rheagan Courville, Liomencia Hall and Jessie Jordan. Brought in to fill those shoes are Sarah Finnegan, Lexie Priessman and McKenna Kelly.

Priessman has been recovering from injury forever, and so has Finnegan for that matter… so it’s not clear how either of them will contribute to the team this early. During a televised intersquad, Finnegan showed off her glorious triple wolf turn on beam, showing her beautiful GAGE lines, extension and toe point. All eyes will likely be on, McKenna Kelly, the daughter of 1984 Olympic Champion Mary Lou Retton. Kelly, like her mother, is known for her ability on leg events, vault, beam and floor. Kelly has been a standout on the JO scene, tying for the Nastia Liukin Cup all-around title in 2014.

But perhaps, the biggest one to watch will be Ashleigh Gnat. Gnat was pulling out Yurchenko double fulls when most of her teammates were performing plain old fulls. Now that the full has been downgraded, Gnat will be a huge asset to LSU’s vault line-up.

Who else wants that NCAA title? There is past winners, UCLA, Alabama and Utah. UCLA has underperformed in the past couple of years, failing to make Super Six two years in a row. They’ve been plagued by injuries and haven’t always been competing with a full roster. With the exit of their golden girl, Samantha Peszek, they now have 2013 American Cup winner Katelyn Ohashi, whom I’m sure, head coach Valorie Kondos Field is going to be using. Despite her coming back from several injuries, Ohashi is already throwing big tricks, like a flip flop flip flop layout on beam. Word on the street is she’s wanting to add back her layout full.

Then there is Utah. You can never count Utah out. They finished second  to Florida at last year’s Super Six by only 0.05. Despite the retirement of longtime head coach Greg Marsden, it’s really going to be business as usual. Marsden’s wife and co-head coach, Megan has taken over as co-head coach with Tom Farden, and reports say, Megan Marsden was the one doing the heavy coaching the past year, with Greg Marsden cheerleading from the sidelines.

Alabama, like Florida and Utah, lost longtime head coach, Sarah Patterson in 2014 after NCAAs and Dana Duckworth was named as her successor. They’re the shining example of how to transition with a new head coach. They managed to stay in the Super Six final, placing fifth overall and they won the SEC championship for the million and oneth time in a row. They did it how they always did it. They remained consistent. The gymnasts to watch on this team: Katie Bailey, junior all-around gymnast, Lauren Beers, senior all-arounder and Kiana Winston – Sophomore all-arounder. Bailey is a good bar worker, Beers is a talented beamer. Both very consistent.  Kiana Winston was recruited as an anchor, but due to injuries, she was out of the limelight.

Last weekend, Michigan #7, won at the Cancun Classic with a 196.975, beating out # 13, Arkansas by 1.825 points. A very easy win for them. And now, there is already a top score to beat. Michigan junior, Nicole Artz won the all-around with a 39.525, that’s an average of 9.88 per event. This is her first competition of the season. Samantha Peszek and Kytra Hunter tied for the NCAA all-around title with a 39.600. Freshman Olivia Karas took second and won beam and vault titles.

Karas is definitely a name to watch. She was the 2014 JO all-around champion and she took third at the 2015 Nastia Liukin Cup. She’s a strong vaulter, and she provided a chance for Michigan to flex their muscles first meet out, intimidating some of their competitors.

Keep an eye out for these individuals:

Lindsay Mable of Minnesota – The Form and Consistency Goddess

Taylor Rice of Stanford – Makin’ It Rain all over the place

Here is the schedule for this weekend: