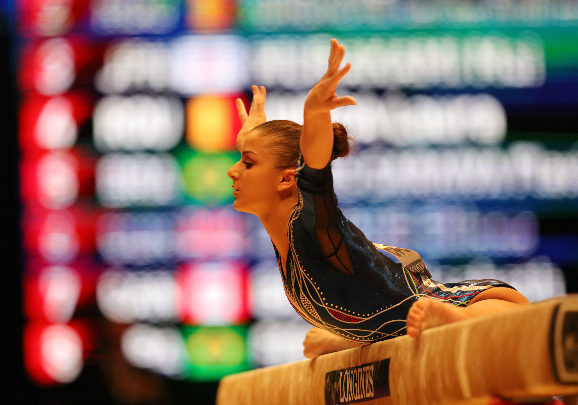 The yearly Italian Serie A has begun, and since it’s the Olympic year, things will be more interesting to follow than ever.

The first meet took place in Rimini. Some foreign gymnasts were added to the local teams. The Polish Marta Pihan Kulesza is with Pro Lissone for the third year, Cintia Rodriguez from Spain with Estate ‘83, little Cristina Vrabie from Romania with Gal Lissone and Claudia Colom Martin with Ginnica Giglio.

There were two notable absences from the competition, Vanessa Ferrari and Erika Fasana. They are both still recovering from injuries but expect to see them back in the next months.

The rules this year changed a little bit. For each team, 3 gymnasts compete on every apparatus and the top 2 scores are counted, but at the end the competition, the 2 best scores out of the four which were discarded, are also added to the total. Remember that during these competitions, a bonus system is used, so routines would score notably lower in a regular international competition. As always, I will write the scores without the bonus system.

That being said, this competition was just a warm-up for a challenging season. Later this year, we’re going to see many upgrades and new routines, considering this could be Italy’s largest field ever from which to select the Olympic team. With the second meet of the Serie A in Ancona on 5th March and especially with the Jesolo competition on 19th March, things will surely become  more and more interesting.