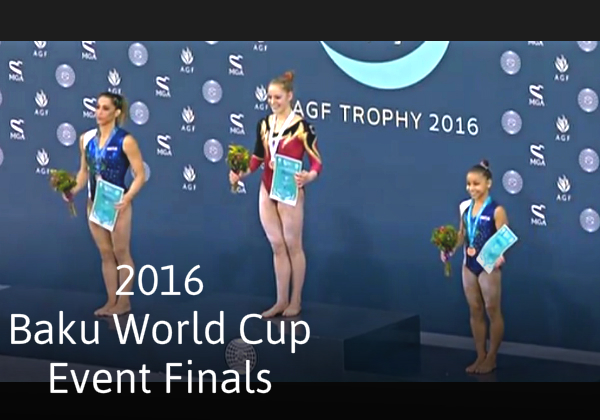 The event finals took place on Sunday, the 21st of February, in Baku. There were hardly any surprises as all of the top qualified managed to win their respective final: Chusovitina was first of vault, Lina Philipp won bars and Flavia Saraiva took both the beam and the floor title.

For the vault top place, Oksana Chusovitina executed a front handspring layout full (a vault with a difficulty of 5.8) well controlled, with a hop forward, and a tall and secure Tsukahara  1 1/2.

The new German senior, Lina Philipp won the bars final with a 14+ score, improving her first day score. The highlight of her routine is the opening series of Shaposhnikova  to Pak to Maloney to overshoot to handstand. She has good execution throughout, small leg separations being the most noticeable breaks in her routine.

Flavia Saraiva hit her complex and brave beam routine. She received a 14.8/6.3, so lower execution and difficulty compared to the first day (15.15/6.5), although in the finals she didn’t have any big wobbles. I  would have expected a higher E score at least. Still, it’s a major achievement that she hit the routine both days, presenting all the difficult tumbling. Saraiva also won the floor final. Her tumbling is good (full in, 2 1/2 twist, double pike, double tuck) but the routine composition seems to be lacking some more complex leaps or turns for a higher difficulty score.

Here is Saraiva on beam:

And the winning floor routine:

**Full results can be found here **