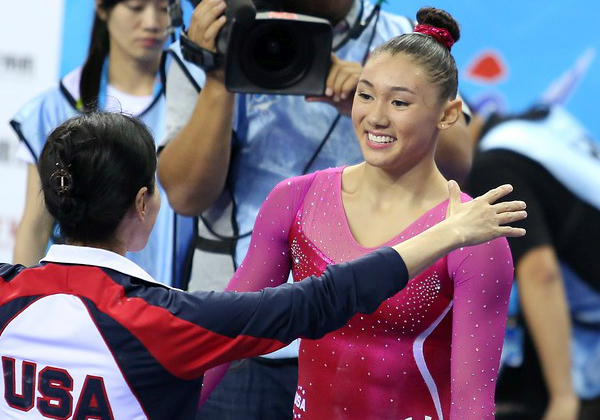 Olympic and world champion with the US team, Kyla Ross, has announced her retirement from elite gymnastics, via USA Gymnastics.

Ross was a major player in for the US team between 2012 and 2015. She contributed to team USA’s gold medal at the 2012 London Olympics competing on bars and beam. She enjoyed individual success at the 2013 Worlds, with silver medals in the all around, bars and beam. In 2014, at the Nanning Worlds, she again contributed to the team success and won the all around bronze medal.

After 2014 Worlds she fought a series of injuries including a hip and groin injury acquired before Nanning, followed by back issues while going through a significant a growth spurt. She also felt that in order to remain competitive she had to upgrade her routines, which proved a painful process given her constant health issues.

As a result, Ross had an uncharacteristically weak showing at the 2015 US Classic and 2015 US Nationals. She was still chosen for the training squad from which the 2015 US Worlds team would have been selected. Kyla decided to withdraw from contention to allow her body to recover and regroup, hoping to have a strong come back for the Olympic year.

But on the 22nd of February 2016 Kyla made the sad announcement that she was retiring from elite gymnastics: “The past year has been a little rough,” Ross, 19, told USA Gymnastics last week. “I’ve dealt with a lot of injuries, and it hasn’t been my best year competition-wise. I tried to push through, but it was getting difficult to train. I didn’t want to go through with it if my heart wasn’t in it.” [via usagym.org]

Ross is committed to compete as a collegiate gymnast for UCLA.

Here is Kyla’s last elite routine on balance beam, another favorite event for her: