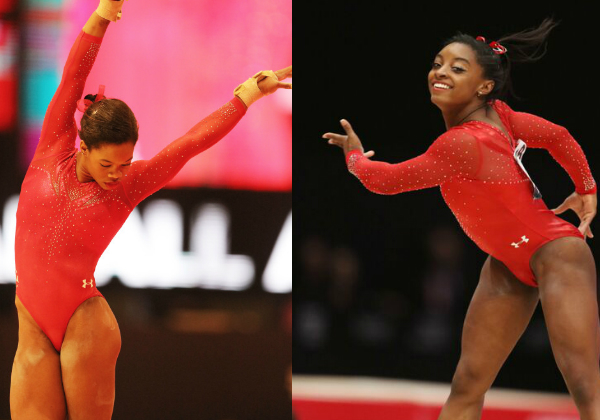 As we get closer to the Rio Olympics, many are pitting the current all around favorite, Simone Biles, against the current reigning Olympic champion Gabby Douglas—a fiery discussion fueled significantly by their recent 1-2 finish at last year’s World Championships.  We all should agree that Simone is the clear favorite.  But could Gabby Douglas truly overtake her?  Based upon the mathematics of the sport and the potential upgrades of each woman, Does Gabby truly have a shot against Simone next year?_ _

In part 1, we discussed the likely execution scores of each lady, determining that Simone has the slight edge, albeit not by much.  However, with the current code of points, we all know that the difficulty scores determine, in large part, the winner on any given day.  Does Gabby have enough goods to close the gap with Simone and truly vie for the title?

In today’s discussion, we will not be talking about what is possible, but what is likely.  And there is a big difference.  (For example, could Simone pull off a triple back on floor?  Maybe.  Will she try it?  No.)  We must remember that each of these ladies wants to upgrade their routines while maintaining safety and limiting their risk of falls/execution errors.

Two questions surround Simone’s vaulting:  1) Will she upgrade her second vault to the Cheng?  And 2) Will she upgrade her first vault to a 3TY?  The answers to those questions are clearly “Yes and no,” respectively.  If Simone had been performing a Cheng all these years, she would be a three-time world champion on that event.  Without that vault, though, she has two silvers and a bronze.  Losing out on a few world titles is one thing.  Giving away Olympic gold is another.  We’ve seen her training the Cheng, and we can expect it to be debuted this year.  However, her Amanar will definitely not be upgraded.  Vault is the event on which gymnasts are most prone to injury, and the few tenths she would get by performing the elusive triple are not worth that risk.  Furthermore, Simone has the best Amanar in the world right now.  It would be foolish to replace the world’s highest-scoring, most reliable vault with a risky, untested triple Yurchenko.

Will Gabby upgrade to the Amanar?  Absolutely.  She’s done it in the past, she’s been training it for some time now, and with her more grown-up body, there’s a good chance it will be better than before.  (Vault is the one event where older women seem to get better and better.  Just ask Chuso!)

This is the one apparatus where Gabby is obviously much stronger than Simone.  But how will she up upgrade?  I have thought about many possible bar routines for her, and here is what I come up with as the most likely:

Other skills like her Healy or other one-armed pirouettes are possible, but I don’t foresee them as likely.  Those skills are only trained well by a handful of coaches (most Chinese).  Also, I’ve considered that she could connect her Pak to the Chow half, but she often comes in very close to the low bar on her pak, so I don’t see that as likely either.  Gabby may surprise us with more and prove me wrong (we will see this weekend) but I think….

Simone has the potential for a lot on bars, but I think she’s going to play it safe.  Her bars aren’t bad—she just wants to limit the advantage the better bars workers have on her.  I believe she will add in the Van Leeuwen (toe-on Shaposh half) that we’ve seen her training.  The addition of that single skill alone will allow her to eliminate her Ray and her toe-on handstand.  As for the Mustafina dismount, I’m torn.  It looks good and would be a nice upgrade, but again I’m not sure that it’s worth it.  It only gives her one tenth, but it’s a tricky skill and the forward landing potentially could go wrong.  Her full-in is almost always stuck cold, and I think she’ll keep it this year.

There really are two D scores when it comes to beam—potential D score and actual D score.  Judges are being very stingy with crediting connections on balance beam, so gymnasts rarely receive full credit that they are planning on.  Simone is a classic example.  In 2015, her potential D score was 6.8, but she never scored higher than 6.5 at worlds (6.5 once, 6.4 once, 6.3 twice).  As for upgrades this year, we’ve seen her working on a standing Arabian as well as a standing full.  Are either of these going to happen?  I think the Arabian is definitely out of the question, and the standing full is questionable at best.  Also, even though we saw a front pike at nationals last year, she opted for the safer front tuck at worlds—a smart move as she came away as the repeat world champion.  Here’s what I find likely for her (being generous and counting on the standing full against my better judgment):

Gabby’s Potential D score isn’t that close to Simone, but her actual one is not far off.  This is because she doesn’t have a lot of connection value built into her routine.  I don’t see a lot of upgrades for her either though.  We have seen her new L-turn + switch ring.  That adds one tenth, but I’m a little surprised that for one measly tenth they would add a skill that so often receives hefty deductions.  (*Sigh).  I’ve mulled over the possibility of her doing a back handspring + two layout stepouts, but given her struggles with stepouts in the past, I decided against it.  I do think a back tuck added to her switch half is very likely.

So many options present themselves on Gabby’s floor exercise:  a double turn after her double L turn, triple twist, 1.5 through to some E skill, double layout, piked Arabian, etc.  But I really don’t think Gabby wants to rework the entire routine from last year.  She wants to make minimal changes with maximum value. What I see is her adding one skill only and raising her D score by four tenths.  I believe we are going to see her open with a Silivas (H) and then drop either the double tuck or double pike (D).  In training videos, it looks like she has a sky high and very easy full-in.  And rumors are floating around saying that a Silivas is in the works.  Every other aspect of her routine will be the same as worlds, except with an additional four tenths in her back pocket.  For Gabby, that’s a great score, and three tenths higher than her London routine.

Last but not least is Simone’s floor.  Again the question is not “What is Simone capable of?” but rather “What will Simone actually do?”  Will she open with the Moors?  Will she upgrade her final pass?  Here’s my guess:

A Japanese girl and a Brit both dismounted with a double layout last year, so I don’t think Simone’s going to let them outdo her.  And even though mounting with the Moors and dismounting with the Silivas would be quite awesome, I don’t see it happening.  Simone is ultimately after Olympic gold, not the “coolest routine ever.”  The Moors is too “pikey” in the videos, and they don’t want form deductions.  But her dismount isn’t all she will upgrade.  Look also for Simone to not count a B or C dance element anymore—plenty of D leaps in her arsenal for that.

So what’s the final tally, and does Gabby really have a shot?

It surprises no one that Simone comes out on top here.  But the way I see it, five tenths in difficulty plus a couple of tenths in execution—Simone has less than a point lead on Gabby.  What that means is, if Simone hits, she wins.  But her days of “three-falls-and-she-still-wins” are over.  Gabby and her coaches know that an in-form Simone is practically impossible to beat.  But they have closed the gap significantly, and if Simone has an off day, Gabby could actually swoop in and repeat as Olympic champion.

Note from the editor: watch Gabby Douglas and Maggie Nichols perform during podium training at the 2016 American Cup.