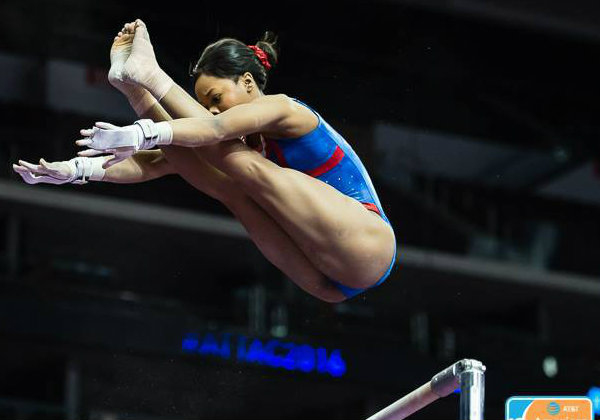 With a total score of 60.165, Gabrielle Douglas captured the title at the American Cup, edging out her closest rival and American teammate, Maggie Nichols. Four years ago, before she won Olympic All Around gold and became a household name, Douglas placed the highest score at the same event performing as an exhibition, winning the hearts of the crowd if not the actual title. This year she did both, performing to what I believe was the absolute best of her ability at this particular time.

On vault, she performed a typically solid and precise DTY; she didn’t get as much distance as she could have, and had to pike down a bit, but otherwise it was clean and stuck. Some fans might be disappointed that she hasn’t yet unveiled an Amanar in competition (since she returned), but I imagine the decision to hold back is a wise and collective one between Douglas and her coaches. It doesn’t look like she could easily squeeze in an extra half twist at this point, and they need to have the longer view in mind.

The middle of the competition is where Douglas really shined, not surprisingly. Her uneven bars routine was a real treat—clean, flighty, with cool lower bar work (inbar, endo, stalder) and an upgraded transition (Chow with a ½) to the high bar. She counted a tiny hop on her DLO dismount, but overall she was in a field of her own in this rotation, posting a 15.266.

On balance beam, she gave what was arguably the highlight performance of the afternoon, opening with a unique front pike to sissone, followed by a confident BHS to LOSO and a solid-as-ever standing full. In a rotation that saw a lot of wobbles and meltdowns, Gabby’s was uniquely balance-check free and a pleasure to watch. Although siting on the edges of their seats, the audience was mirroring the attitude of the performer herself by the middle of the routine. It was very much, “Oh, we’ve got this.” She posted a 14.966 with a 6.3 difficulty value.

Her floor routine was admittedly a bit of an anti-climactic finish to what was otherwise one of Gabby’s more exciting All-Around performances. The choreography lacked, though this time I suspect it was equally due to the conservation of energy and not simply her career-long struggle with dance. Still, she stood up all of her passes: a double Arabian to stag to open, followed by a full-in, double pike, and double tuck to finish.

Overall, I hope this competition served as a major confidence-booster to the comeback champ. It should.

Coming in second with a total score of 59.699, World gold and bronze medalist Maggie Nichols capitalized on the winning streak she set into motion last year, performing with ease. For an athlete who struggled to find her way at the beginning of her senior career, Nichols is sure making up for it now. I imagine she will continue to demand our attention as the road to Rio becomes shorter.

Along with Gabby, she also broke the 15-mark on the first rotation, posting a 15.033 for a well-executed DTY with a just a small hop on the landing. I much prefer her DTY to her Amanar, and hope she’ll stay away from the latter unless she senses her inclusion on the team is dependent upon it.

On bars, she performed a typically clean if not super exciting routine for a 14.633. I believe she wanted to connect her Maloney to pak, but if it was a mistake, it certainly wasn’t noticeable. She finished her routine with a stuck DLO.

Balance Beam and Floor Exercise proved to be her best events. On balance beam, she opened with a wolf spin combo and later performed a wolf jump into immediate punch front. Her BHS to LOSO had a bit of a balance check but beyond that, it was a confident beam routine, earning a 14.833.

On floor, she reminded us why she was in last year’s Floor Final at World’s, though I have to admit I miss last year’s routine. She opened with a double twisting double back, followed by a full-in, piked full-in, and double tuck. She was crouched pretty low on the last pass, the pressure of the day finally taking its toll, but she held onto it and in doing so held onto her solid second place finish.

Coming in third with a total score of 57.132 was Canada’s Elsabeth Black, who continues to be a breath of fresh air not only on vault, but even on the other three events where her composition and individual skills are markedly different from the other competitors. On vault, she performed a front handspring full for a 14,800, the only non-yurchenko vault of the competition. On bars, she caught her piked hindorff, the skill that she missed at last year’s competition, and on balance beam, she managed to stay on but counted several balance checks, from the double turn at the very beginning to the front pike and BHS to standing full. It wasn’t Ellie at her best, but it got the job done. On floor, she went out of bounds on her first pass but contained her energy on the rest of them, bringing the competition for the women to a close.

Outside of the top-three All Around performances, the rest of the field also contributed some memorable performances and moments. Germany’s Tabea Alt rolled out of her DLO and fell on her switch ring, ultimately suffering what I imagine was a disappointing competition for her, but she also demanded attention in a good way. She is a good bar worker and will get better as the season progresses, and her aerial to LOSO to LOSO on beam is something to behold.

Amy Tinkler also caught my eye. She had admirable vault and bars performances (the latter is a bit rusty but like Alt’s, it will improve with time), and her beam routine was superb, with a LOSO + LOSO + LOSO series bringing us back to the 90’s and an excellent standing full.

Italy’s Carlotta Ferlito came back from an underwhelming performance on bars (under-rotating her dismount) to give a great performance on beam and an exquisite one on floor exercise. On the former, she counted a few slight balance checks, but her BHS to BHS to layout was solid and she kept up a good rhythm. On floor, lack of difficulty following her opening pass (a full-in) was of little consequence at least as far as the crowd was concerned. She performed the heck out of it and it was, in a word, delightful. Her Memmel turn was one of the best I’ve seen.

Japan’s Mai Murakami also came back from one disappointing performance (on beam, where she fell on her BHS to BHS to layout series) to give a nice closing performance on floor exercise. She performed a beautiful DLO to begin, followed by a 2.5 to layout, 1.5 to full twist, and double pike to end.

Rounding out the competition were the Netherland’s Tisha Volleman and Brazil’s Lorrane Oliveira. The former held her own in a field that was considerably more seasoned. Her only major mishap was on floor exercise, her best event, where she didn’t get her triple twist all the way around and counted a fall.

Oliveira, for her part, had a very disappointing competition, which is a shame because there are moments that reveal real potential.

She began her meet with a solid DTY, but then fell on the next three events: on bars, she completely missed the catch on her jaeger, eliciting a gasp (and then encouragement) from the audience; on beam, she held on to her front tuck mount but came off on her switch leap; and on floor, well, I think the burden of the meet had become too much. It just wasn’t her day.

Overall, this wasn’t a bad meet for the beginning of the elite season, at least for the women. Douglas proved she’s well positioned to secure that second AA position for the Americans if she builds upon the solid base she has; Nichols proved last year was no fluke and that she’s an integral part of Team USA’s All-Around depth; and while the rest of the field didn’t represent the toughest AA challenge the Americans typically face at major international competitions, their performances on particular events made the competition interesting enough if you’re watching for the sake of pure gymnastics and not the rankings.