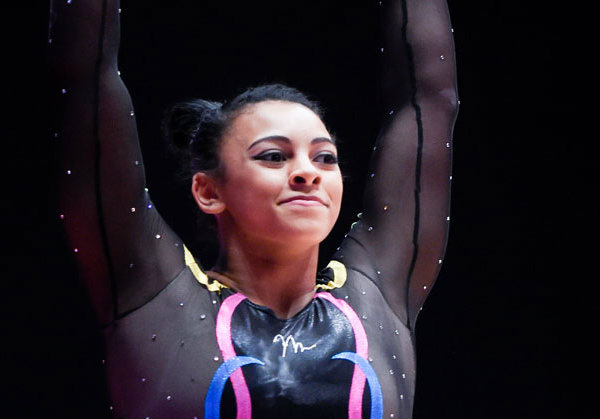 The Vault Final medalists repeated their qualification order, with the gold and silver medalists improving slightly on their qualification scores. Great Britain’s Ellie Downie won the title with an average score of 14.850. She performed a DTY that was a bit offline but otherwise very clean, and a round-off half-on, layout full off. She was followed by Slovenia’s Tjasa Kysselef, who performed a front handspring on, full tuck off, and a relatively clean FTY for an average score of 14.200. In third place, Canada’s Rose Kayen-Woo brought in an average score of 13.638 with a high and clean FTY and a front handspring on, piked salto off with just a step forward.

The Uneven Bars Final boasted a more diverse field with more competition between the top-athletes and a medal stand that looked different than the one imagined after qualifications.

Ellie Downie improved upon her qualifications score, posting a 14.675/6.3 D. Her pak was a bit off (feet apart and and overcooked it) and handstands a bit short, but her Maloney to Tkatchev was good and DLO dismount solid. She was followed by Russia’s Seda Tuthkhalyan, who so far is having a good competition—just what she needs. Her toe-on full wasn’t quite on top the bar and her Bhardwaj is still a bit wild, but she made it right out of her Maloney and hit everything else quite well, including a very tight double front dismount. She should be proud with a score of 14.525.

Coming in third after qualifying in first place was Russia’s Natalya Kapitonova. I didn’t see her routine, but I imagine it wasn’t the one she was hoping for. She scored a 14.450.

(Update: after viewing Kapitonova’s routine on youtube, her biggest mistakes were right at the end–a very arched HS at the end of her toe-on full, which didn’t set her up well for a full-twisting double back dismount. She landed it but had to fight for it as she stumbled forward. The rest of the routine was lovely.)

Another disappointed performer was Ruby Harrold, who came off on her Bhardwaj. Not the one we know she can hit.