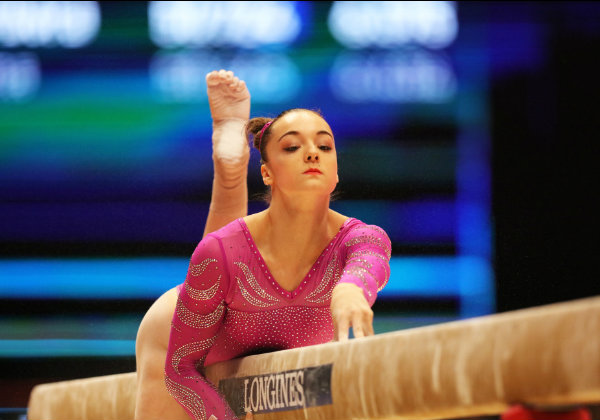 Even though we all hate the rule which limits Olympic teams to five members (soon to be four in 2020), there is one good thing that comes out of it:  It gives us all the opportunity to work the jigsaw puzzle of who is going to be on that team—who will go and who will be left home—who will be a star for life and who will have trained their entire life for that one shot at Olympic glory only to be relegated to the inglorious position of “1st alternate” or “2nd alternate.”  And come on, if we were all honest with ourselves, we would have to admit that half the fun of this Olympic year is the suspense in wondering who the five girls are going to be on Team USA.  We all love suspense and mystery.  There is probably going to be very little suspense in the Olympic team final itself.  Most likely the USA will easily walk away with the gold.  But which five girls are going to make that happen?  Now that’s the big question we’re all dying to know the answer to.

In Part 1, we concluded that Simone, Aly, and Gabby would be on the team.  Conversely, MyKayla, Brenna, and Ashton would not.  That leaves us with four candidates for the final two spots:

I decided to do this post in two parts, because choosing two ladies out of these four is just plain difficult.  I’ve done my best to put myself in Martha’s shoes, and here is how I see it most likely playing out:

It is obvious that Maggie, Lauren, and Ragan are all-around type gymnasts, who could be used on multiple events.  Madison Kocian, on the other hand, is definitely a bars/beam specialist (who just happens to have a mediocre floor and an FTY vault, just in case).  So will she be part of team USA?  I think the best way to answer this question is by asking, “What would team USA look like without her?”  Well, they would be perfectly fine on vault, beam, and floor, but bars would be weaker.  In the absence of a bars specialist, Gabby would move up to the anchor spot.  Aly would not be used.  Simone could be used, but in the past, has not been called upon in team finals to do bars.  This is truly unusual, as the highest scorers in qualifications almost always perform in the team final.  Perhaps they are trying to rest her as much as possible, or maybe she just doesn’t want to do it.  Whatever the reason, it seems likely that Simone would not do bars in the team final.  Therefore, both ladies chosen from the above list of four would have to perform on the uneven bars.  Kocian’s D score is around 6.7, while the other three range from 5.9-6.1.  Upgrades are possible between now and the Olympics, but none of these three ladies will come anywhere near Kocian’s score.  If Russia and China put up three big scores (as they are fully capable of doing), that would put Team USA in a deficit they are not used to having.  No other event for the Americans has this lack of high D-scores.  Furthermore, Gabby would be unlikely to win a bars medal (unless several people fell), because her D-score is not high enough.  Basically, without a bars specialist, Team USA would have already opened up a gaping hole in the team final and would essentially be removing themselves from contention in the bars final.  I really can’t see Martha liking either one of those outcomes, especially when she has a co-world champion at her disposal.  So, I must conclude…. MADISON: IN

That leaves only one spot for Maggie, Lauren, or Ragan.  ONE SPOT for three very talented and likable gymnasts.  And I know that no matter what I say here, some people are not going to be happy.  That’s ok.  I am willing to face the gymternet firing squad for the sake of objectivity.  And trust me, objectivity is tough here.  I have gone over and over and over this in my mind.  I have a great admiration for all three of these ladies, but two of them have to be left out.  Who should be in and who should be out?

First of all, I surprised that I have not read more about the similarities between Lauren Hernandez and **Ragan Smith. ** It is uncanny how much alike they are!  They are both strong on beam, weaker on vault, and middle of the road on bars and floor.  They have the same vault, and three out of their four tumbling passes are identical. They both have thoroughly entertaining and well-choreographed dance (even though the styles are different).  On bars, Lauren does more with release skills while Ragan prefers in-bar work, but many of their skills are again identical. Finally on balance beam (their greatest strength), they are both world class—as we saw at the recent Pac Rim championships, scoring very similarly. How much more alike can two gymnasts be (at least in terms of scoring and team potential)?!

So instead of deciding between these two ladies, let’s first treat them as the same person. Let’s compare Maggie Nichols with **Lauren-Ragan. ** If Maggie turns out to be the better choice, then we won’t have to decide between Lauren and Ragan.  If Maggie is out, though, then we’ll have to compare them more closely.

No doubt, Maggie is the best choice for vault among the three.  Equally certain is that she is probably the worst choice for beam.  (It’s so ironic—any other country would be thrilled to have Maggie on beam, but because of the USA’s depth we’re now saying she is “the worst.”)  When it comes to bars and floor, all three of these ladies are neck-and-neck.  Maggie might have the slight edge on floor but, in reality, it doesn’t matter.  With Simone and Aly already on floor, none of these three would make the final anyway, so all “individual potential” is inconsequential.  So the question must be, “What does Team USA need more: Maggie’s Amanar or Lauren-Ragan’s beam?”  If you take away Maggie’s vault and substitute it with a lesser Amanar or even Gabby’s DTY, Team USA loses between 2 and 4 tenths.  If you take away Lauren-Ragan’s beam and substitute it with, say, Aly’s beam, they lose almost a point.  In addition to this, Maggie has only one vault and cannot medal in event finals.  Lauren-Ragan, however, could definitely bring home a beam medal.  So, even though she could go down in history as the most talented gymnast never to have a shot at anything, and as much as it truly pains me to say this….MAGGIE: OUT

So we must come back again to Lauren Hernandez and Ragan Smith.  If you had asked me six months ago, I would have immediately gone with Lauren.  But how far Ragan has come in a short time!  At last year’s US Junior Championships, Lauren was the top dog in all-around and bars, with Ragan winning beam and floor.  But at Jesolo just last month, Ragan edged Lauren for the silver medal (mostly because of a botched bar routine from Lauren, but still….).  At the recent Pac-Rims, Lauren again was the higher scorer.  Their D-scores are almost identical, they have similar execution errors, and I would be comfortable with sending either of these ladies to represent the USA.  But one must be chosen.  And in the mind of Martha Karolyi, I believe she would go with the proven athlete who has come out on top more times and who shows promise on all four events.  Things may change over the next couple of months but, at present, because of slightly better vault and bars, and because of a more proven track-record head-to-head….LAUREN: IN and RAGAN: OUT

So there it is:  As it stands now, I believe the most likely Olympic team is:

Vault:  Gabby, Aly, Simone (weak for the USA, but still strong compared with the rest of the field)

Bars:  Lauren, Gabby, Madison (Very competitive, but not as strong as China and Russia)

Beam:  Aly/Gabby/Madison, Lauren, Simone (it doesn’t get much better than this)

In case I didn’t make myself clear—this is not exactly the team I would choose, but it is the team that I think Martha is most likely to choose.  I guess we will see in two short months!