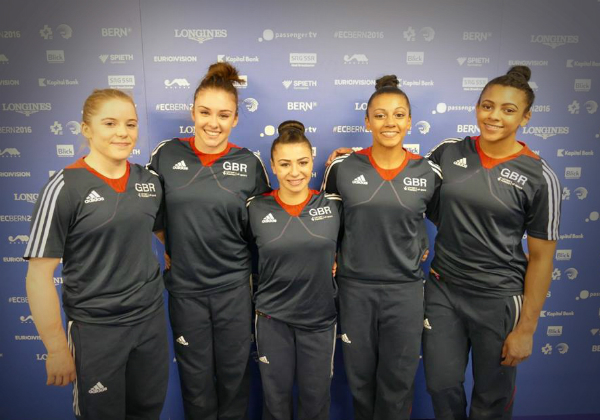 Great Britain won the top team spot after Thursday’s qualifications. Gabby Jupp (for the first time since 2013 Euros) is finally back and healthy and did a fantastic job on bars and beam, Ellie Downie was relegated to vault and floor specialist but this helped her focus much better, earning two spots in the event finals. Rebecca Downie was rock-solid too, competing on bars and beam, where she also made finals. Claudia Fragapane had a good day despite a fall on beam. She scored important points on vault and floor. Ruby Harrold had a big mistake on bars but still managed to get a 14+ score; she also scored for the team on vault and floor. Across the four events, Great Britain had only one score below a 14 (Frags on beam); they also earned seven spots in the event finals, the most of any team nation competing in Bern.

Russia was a three events team today: equal to Great Britain on vault after solid DTYs from Ksenia Afanasyeva (who qualified for the vault final), Angelina Meknikova and Seda Tutkhalyan. They were the top scoring team on bars (no surprise) and beam (under regular circumstances a surprise but under the circumstances of these Euros, not a major surprise). Floor was the missing piece, where Melnikova, Tutkhalyan and Mustafina all scored in the 13s. Melnikova won the unofficial all around title; besides the team final, the Russians qualified for five other event finals (one vault and two bars and two beam spots respectively). Daria Spiridonova was bumped out of the bars final due to the two per country rule. Unless she somehow hit the bar with her foot or something else major happened during her routine (which is hard to say), this is a silly judging decision as Dasha should have been above Melnikova and those poor handstands.

Switzerland was third in qualifications after a fantastic day from Giulia Steingruber and Ilaria Kaeslin. Giulia earned the top score of the day for her first vault (Rudi, 6.2/15.666). Giulia’s floor routine was one of the highlights of the day with impressive tumbling (full in layout, DLO, full in) and very neat dance, which she has been working hard to polish over the last two-three years. Ilaria Kaeslin  also competed on all four events with consistent performances. She managed to qualify for the beam final (and justice has finally been served). Caterina Barloggio, Thea Brogli and Stefanie Siegenthaler and the other Swiss gymnasts competing here.

Romania was 4th, heavily relying on Catalina Ponor for this result. Despite some nerves shown on beam, Ponor raised to the occasion, as she has always done, at least when competing for the team. She scored above a 15 for her DTY (which she recently got back) and in the mid 14s on beam and floor. Maria Holbura was another consistent little competitor for Romania, with mid 13 scores on bars, beam and floor. Anda Butuc contributed with clean but less difficult routines on bars and beam, Anamaria Ocolisan had a good DTY but fell on bars on a transition, while Silvia Zarzu performed an FTY on vault and will look to improve on her floor score in the team final.

Germany and France placed 5th and 6th respectively but they were within hundreds of a point of Romania.

For Germany, this was the first major competition for Kim Bui, back from injury. She made bars finals. Amelie Foellinger managed to qualify for the floor final.

The French team was built around Oreane Lechenault, Marine Boyer and Marine Brevet. The highlights were Boyer’s vault (DTY), a beam rotation which resulted in two event final qualifiers (Brevet and Boyer) and Marine Brevet’s floor routine (also qualified for final).  If they improve their uneven bars consistency, a bronze medal is not out of question on Saturday, although Giulia Steingruber and her team mates will definitely put a good fight, as will do Romania and Catalina Ponor.

Italy, with Sofia Busato, Lara Mori, Elisa Meneghini, Martina Rizzelli, Enus Mariani had many mistakes and placed 7th on the day. Two finals for them: Busato on vault and Rizzelli on bars.

Hungary managed to qualify for the team final in 8th, for the first time in decades (since 1998 to be more exact, according to Dorina Boczogo). First year senior Zsofia Kovacs competed with impressive grit and determination placing 3rd in the unofficial all around ranks and qualifying to the vault and bars finals.