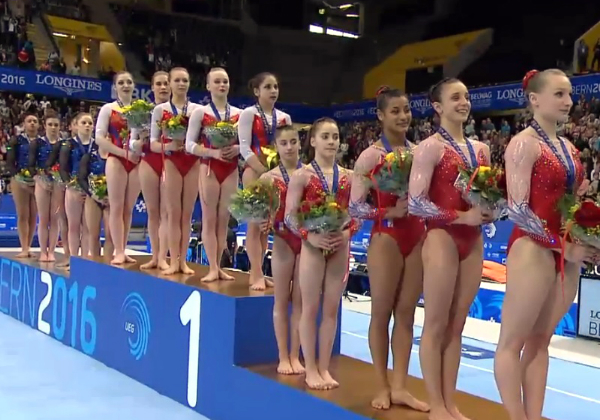 Russia started on vault with solid Yurchenko doubles from Angelina Melnikova, Seda Tutkhalyan and Ksenia Afanasyeva. On the same event, the British team followed up with equally solid vaults from Claudia Fragapane, Ruby Harrold and Ellie Downie. The suspense over the winner was short-lived, however. The second rotation started with Russia on bars:  flawless executions from both Spiridonova and Mustafina scoring well into the 15s with their routines, while Melnikova put a respectable 14.966. Great Britain failed to match – Jupp and Downie were solid (14.366 and 15.066) but Harrold fell on a Tkachev (13.166).

The Russians continued to focus well and deliver (except for Tutkhalyan’s full layout on beam). But Melnikova and Mustafina were very careful and efficient in their work (and also pretty to watch) – for matching 14.8 scores. On the same rotation team GB had their second and third big mistakes coming from Claudia Fragapane (fell on a layout full attempt) and Becky Downie. In the final rotation, on floor, the Russians had improved performances compared to qualifications, with Tutkhalyan and Melnikova both scoring in the 14s while Aliya stepped OOB on her first pass but had a solid performance overall. The British girls “won” floor rotation with huge routines from Ellie Downie and Claudia Fragapane and a good effort from Ruby Harrold but the difference between the two teams already was too large for them to be able to catch up. Russia is Senior European Champion again, after six years!

France placed third after a beautiful team effort. They struggled on beam at the beginning of the meet but slowly started to rise with better performances on floor (where they were rewarded with the best execution scores of the day as a team). On vault, Boyer’s DTY gave them an extra boost. They finished in style on their best event, bars, with scores in the 14s from Alison Lepin, Oreane Lechenault and Loan His.

Switzerland finished 4th, but produced some of the highlight routines of the final so they have enough to be proud of, especially from Giulia Stengruber on vault and floor and Ilaria Kaeslin on beam and floor. Speaking of Giulia, she replaced her full in double layout with a Silivas on the first pass on floor, thus leaving us wondering whether the plan is to incorporate both in her routine come Rio. She certainly looks strong enough. Her floor score today was 15.033/6.2.

Italy placed 5th after an inconsistent overall meet but improved performances compared to qualifications. Note that Elisa Meneghini received one of the top beam scores of the day after (finally) hitting her layout full (14.500).

Romania placed sixth – there were a couple of falls (Ocolisan on bars and Holbura on beam) but the main issue here was lack of difficulty. Catalina Ponor had another great meet with only tiny adjustments on beam and floor (and mid 14s scores) and a 15.066 for her DTY.

Germany placed 7th after starting with a beam rotation marred by mistakes. Their best event was bars, where Kim Bui brought the highest score, a 14.866. Bui, who competed all around today, is making a strong case for herself in the view of the July team selection for the Rio Olympics.

Hungary placed 8th and, despite the predictability of this result, they actually put up a good fight and remained in the mix for a 4-6 place up until the last event. Their young up and coming star, Zsofia Kovacs, managed to pull a great bars routine (14.500) and a strong vault (14.966).