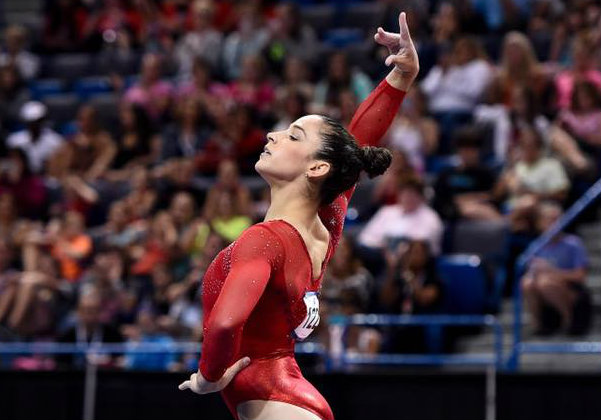 The 2016 U.S. Secret Classic concluded on Saturday evening in Hartford, Connecticut with the senior competition. With the Olympics in the air, the annual meet felt tenser than usual, though most of the athletes that are part of the Olympic discussion were able to withstand the pressure and deliver where they most needed. Alexandra Raisman, Rachel Gowey, and Alyssa Baumann won gold, silver, and bronze in All Around in the absence of all-around performances from the usual dominators, while people like Simone Biles, Gabrielle Douglas, and Laurie Hernandez used the meet to test a couple of routines and get used to the lights again.

The first rotation got off to a bit of an underwhelming start, with Biles and Brenna Dowell scratching vault, Hernandez scratching balance beam, and Douglas and Skinner scratching floor exercise. Alexandra Raisman and Alyssa Bauman had unfortunate outings on bars, both faltering on toe-on full pirouettes. Baumann managed to stay on but then put her hands down on a full-twisting dismount after letting go too early. Raisman also managed to save her pirouette but fell on her next element—a Maloney transition.

Ashton Locklear, Madison Kocian, and Ragan Smith were much more successful on bars. The former two gave their typically masterful performances, earning massive (if inflated) scores—a 15.850 and 15.700, respectively, and Smith earned a 14.9 for an aggressive, speedy routine.

Over on balance beam, Rachel Gowey also set herself up for good night, beginning with a clean BHS to LOSO to LOSO.

In the second rotation, Mykayla Skinner performed an improved Amanar, Rachel Gowey continued to impress on FX, opening with a big triple twist, and Baumann and Raisman gave redeeming performances on balance beam. From Bauamnn’s opening standing Arabian to Raisman’s opening punch front pike and solid Patterson dismount, they may have showcased decidedly different styles, but both rallied and performed to their best here. Smith and Locklear also gave solid performances. Smith floated her BHS to layout and nailed her standing back full, earning a 14.65, which would have been higher had she not faltered on her new Patterson dismount, landing quite low and brushing one of her knees on the mat. It was an unfortunate ending to a beautiful routine, certainly, but I don’t believe she did herself any disservice by going aggressive and then saving a potentially bad fall.

Locklear, for her part, gave a less dynamic but very solid performance. She counted a little check on her BHS to LOSO but was confident on everything else. With Marta’s distaste for one-event specialists, this was a routine she needed. Her main rival for a berth on the Olympic team, Madison Kocian, faltered here, falling on a back tuck near the end of an otherwise good routine. Certainly one hit and one missed routine isn’t going to decide anything, but it definitely heats up the competition-within-the competition for these two.

Finally, over on uneven bars, we got our first look at Simone Biles, who gave a typically commendable performance with a beautiful full-twisting double dismount to cap it off.

In rotation three, Rachel Gowey gave her weakest performance of the night, performing an offline DTY with a big step, while Raisman and Bauman began to close the gap created by their first performances. Raisman went out of bounds on her first pass—a 1.5 twist to double Arabian to front layout—but the rest was solid. Bauman opened with a big DLO and stuck her next pass, a whip + whip + BHS + double tuck.

Amanda Hundley delivered a clean DTY; Douglas performed a great uneven bars routine with all of the intricate low-bar work and a typically dynamic piked Tkatchev and stuck DLO dismount; Biles commanded the beam after an atypical balance check on her front tuck with half turn; and Brenna Dowell delivered a commendable beam performance opening with a ambitious front tuck mount.

In the fourth rotation, the leaders easily nabbed their podium spots, with Raisman performing a huge Amanar, Bauman delivering slightly messy but solid-enough DTY, and Gowey performing a commendable bar routine with good Shaposh-style transitions and a big DLO dismount. Not her best, but it was enough. Raisman finished with an all-around total of 59.250, Gowey with a 58.3, and Baumann with a 58.0.

Not performing for AA placement, Laurie Hernandez and Gabrielle Douglas nevertheless gave commanding final performance, with Hernandez hitting her new and improved bar set (she earned a 15.4) and Douglas having the save of the night when she fought for a piked front punch after a foot slipped off the beam. The rest of the routine was solid as ever, further proving that this comeback is just as strong in her mental game as it is the physical one.

Photo Source, with thanks to USA Gymnastics