2016 US Nationals: Report and Results 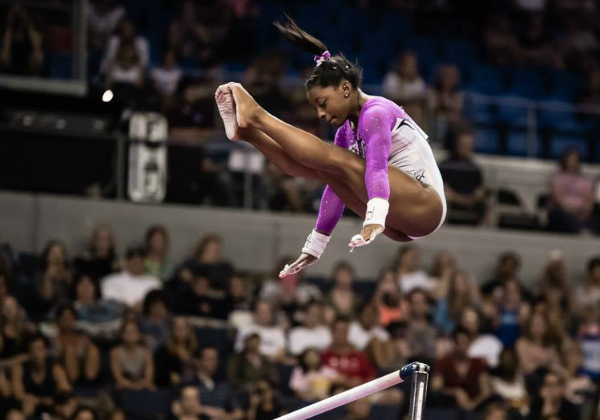 Day one of nationals is the official start of the US selection for the Olympic team. This will not be a defining moment in the process  but it’s the first step to Rio. From now on all the routines will matter, if not for the selection committee, at least for the way in which each athletes perceives her own progress towards the Olympic squad.

Simone Biles won by a huge margin, of more than two points. She looked focused and hit full difficulty on all four events. She started on beam with a very solid routine, only the Barani gave her some troubles incurring her only visible wobble on the day (15.7/8.9). Floor was amazing, with the perfect form and out of this world height on each tumbling pass: full in layout, Biles to stag leap (stuck), double-double and full in (16.100/6.9). She vaulted Amanar (hop fwd – 16.0/6.3) and Cheng. On bars (15.100/6.1), she may not have the most difficult routine of the US field, but she had the best execution of the day, so there is that. (62.900)

Lauren Hernandez tied with Aly Raisman for 2nd  with 60.450. Throughout the year she demonstrated on every occasion that she is a serious contender for the Olympic team. Now she looks like a lock after making it through the all around without major wobbles. And despite the fact that these routines look “easy” for her, she had an overall difficulty of 24.7 points, the 4th highest in the competition (after Biles 26.1, Raisaman- 25.3 and Skinner 25.1). She started her evening on floor with a beautiful routine : double layout a bit uncontrolled landing, Arabian double front to stag, front double full to punch front and double back tuck. Her choreo might not be everyone’s cup of tea but she performs and this makes her stand out. Her Yurchenko double full was very serviceable, while on bars and beam she had good difficulty and an execution to match (15.3/6.4 on each event).

With the same total all around score, Aly Raisman also consolidated her chances to make it to Rio. She continues to be 2nd best in the US on two events, beam and floor. She started the day on beam withe  very steady routine, working with patience and hitting all her planned connections- pike front to stag, flick-layout to two, switch leap- back tuck, side aerial, punch front -split leap. The only element that does not look 100% was the switch half but you instantly forget about it as she ends the routine with the best Patterson dismount (15.35/6.5). Her floor routine is a massive task every time but she makes it though ( 1 1/2 to Arabian double front to front layout, Arabian double front to stag, double layout as a third pass, series of three leaps during which she didn’t seem to be hitting 180 not even once), double pike to dismount (15.6/6.6). The Amanar vault continues to look less scary but it was not without visible form issues (helicopter legs) – 15.35/6.3. Bars were a hit routine but she had some leg separations (14.15/5.9).

Madison Kocian finished the night on a surprising 5th place (58.15) despite low vault difficulty (only Yurchenko full due ankle injury earlier this year- 13.8/5.0). Kocian had very serviceable routines on beam and floor. She had a pretty good bars routine for a 15.45/6.6 – inbar full, Komova II – Pak – Chow I, inbar half to straddle Jaeger, Stader full to full in dismount. She will look to connect the inbar full to Komova II series next time, otherwise she remains 2nd in the nation on this event, to Ashton Lockear. Her spot in the Rio squad as a bars specialist is yet to be secured.

Not looking at the top of her abilities but still very much in the mix for a spot on the Rio squad, was Gabrielle Douglas, who finished 4th with a 58.900. Even if she continues on this same trend – meaning without the Amanar and with a shaky beam routine, chances are she will still make it for uneven bars and her proven ability that she can pick herself up and deliver under the pressure of a big competition.

Poor Ragan Smith started her competition with a disaster on floor:  double layout with a hop OOB, while the second pass should have been 1 1/2 to triple full but she stopped after the 1 1/2, double Arabian, double pike with large step forward. She also had a wobbly beam routine, almost stepping down on the standing Arabian (14.300/6.2).

Another gymnasts that has seen her place in the Olympic trials severely threatened, is Brenna Dowell. Outside of the top eight all around, Brenna faltered on bars and beam and had a mediocre floor execution (some uncontrolled landings). Her best placement was 11th on floor.

Maggie Nichols made her official comeback after knee injury, competing on bars and beam. While bars looked very good and fluid, on beam she will be seeking to regain attack and build up some more difficulty over the next weeks. Without huge D-scores on these event she can’t bid for a specialist spot, so hopefully she will have time to return on all four events while building up confidence before trials.

Ashton Locklear couldn’t have hoped for better outcomes from this day: she hit her bars routine (inbar full – Komova II – Pak – Maloney – overshoot to handstand, Stalder half to straddle Jaeger, full in dismount). Beam was also secure and although her knees are still not flawless I really didn’t think the score of 14.45 was generous, or at least I don’t think that the “international” judges would be any less generous.

MyKayla Skinner had bigger that usual execution errors on bars and beam were managed a good floor routine and two good vaults (Amanar and Cheng). She was severely deducted on execution and finished 7th (57.550).

Amelia Hundley was consistent across four events and finished 6th  with a total of  57.85.

Here are the full results via USA Gymnastics