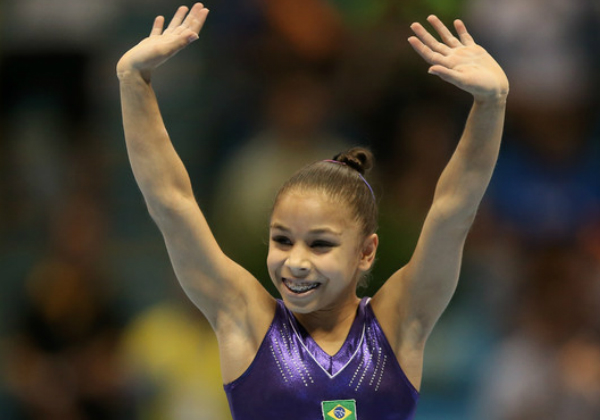 Flavia Saraiva hit her huge beam routine both in qualifications and event finals. She won the beam title with a 15.125 (6.4 for difficulty). Saraiva looks like a lock for an Olympic event final. Her execution was solid with no major wobbles nor form breaks. The major downside of this routine is that some of the connections are risky (punch front – wolf jump, the switch ring leap to sheep jump).

In the absence of solid competition from floor specialists (aside from Ferrari, but she is just coming back from injury), Flavia also took the floor title with a 14.35/5.8.

Rebecca Andrade placed second on both beam and floor. On beam, she showed some good acro work flick -layout stepout, aerial walkover to aerial cartwheel but the leaps gave her some troubles. She was awarded a 14.125/5.9. On floor she managed a very entertaining routine to Beyonce’s “Crazy in love”, with tumbling that looked way too easy for her (full in, 2 1/2 to full, double tuck, double pike – 14.100/5.8). This routine has the potential to be one of the highlights in Rio, especially if she adds back some of the harder tumbling.

In the bars final, Rianna Mizzen from Australia was a surprise winner with a 14.5/6.0 (Maloney – toe on Tkachev – Pak – Van Leeuwen, toe on full to immediate full in dismount). She was followed by two gymnasts from China: Xie Yufen had the most difficulty of the final with a 6.5 (Maloney – Pak salto – van Leeuwen followed by a series of turns in L grip connected to inbar Tkachev and a double layout dismount). Liu Jiaqi  was third in this final after some severe execution deductions and a score of 14.175/6.0.

Jessica Lopez also attempted an intricate and difficult routine but her execution kept her outside of the podium – 4th with a 14.0/6.5.