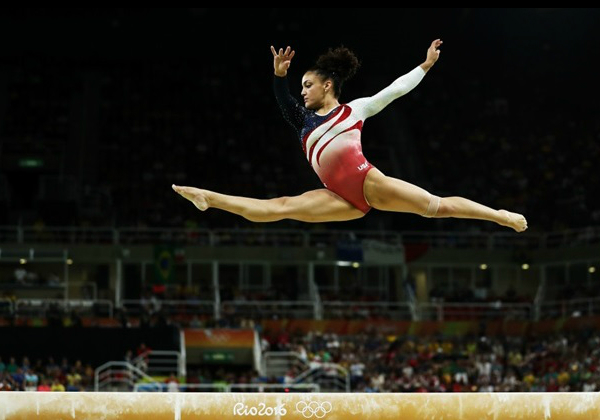 There is much news to catch up on in the Gymnastics world.  One of the biggest gymnastics stars in the world today – as well as a group of tomorrow’s budding stars – dominated the news in gymnastics this week.

Will Simone coach herself?

After the unexpected announcement that Simone’s coach Aimee Boorman had taken a new position in Florida, many were wondering whether Simone will join her after she returns from her break from gymnastics. Unfortunately a Boorman – Biles reunion is not in the cards at all. Simone confirmed that she has no plans to join Boorman and that there is even a possibility for her to coach herself although she is aware that someone might need to step in and “crack the whip” at times: “I think I could coach myself, but it helps to have guidance and for someone to crack the whip and tell you when to condition and how many sets you need to do. I’m sure somebody will put up with it”.

Laurie Hernandez, a gold medalist at the 2016 Olympics, teamed with dance partner Val Chmerkovskiy to win the 23rd season of the hit TV show “Dancing with the Stars.” The duo fox-trotted and tangoed their way to the title, receiving a perfect score from the show’s panelists. Hernandez and Chmerkovskiy were named champions after judges’ and fan voting led them past other finalist teams that included IndyCar driver James Hinchcliffe and former NFL player Calvin Johnson.

Hernandez is the second gymnast to win “Dancing with the Stars,” and the fourth to compete on the show.

The young gymnasts continued the pursuit of their athletic dream when they participated in the final US national team camp of 2016. The two-day camp, held at the USA Gymnastics National Team Training Center at the Karolyi Ranch, gives gymnasts a chance to put their skills on display in front of other athletes and coaches.

The camp was lead by Valeri Liukin, a former Olympic champion himself, who became National Team Coordinator in September 2016.