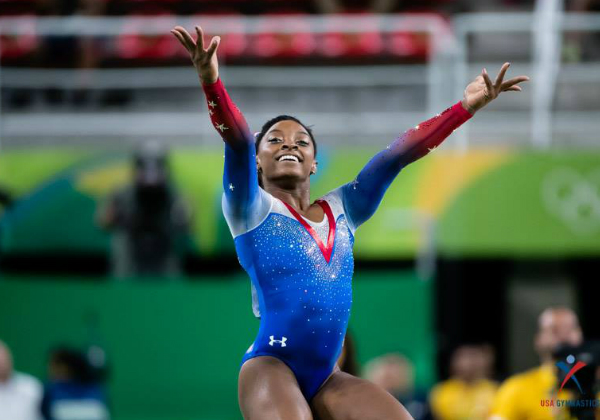 This week’s biggest news from the world of gymnastics include gold girl Simone Biles, the just revealed location of the 2017 USA Gymnastics Championships, and remembering three-time Olympian John Beckner.

We won’t see Simone Biles compete in the near future. While on a promotional tour for her book, “Courage to Soar”, the gold medalist announced taking a break from gymnastics for at least a year and a half. She said she wants to embrace the moment, go on vacation, and let her body rest which has been breaking down on her. After all the hard work she and her Olympic teammates have put in, she surely deserves a break. Most likely, Biles will skip the 2017 World Championships in Montreal, Canada, but she has plans to return to training in time to compete at the 2020 Olympic games in Tokyo, Japan.

Just because Biles has suspended training doesn’t mean she’ll be slowing down. Besides releasing a book about her extraordinary life story, she was just named one of Glamor magazine’s 2016 Women of the Year. This award celebrates women’s achievements. Biles also has been honored by joining the Ebony Power 100 list which names the 100 most influential African-Americans of our time. There is no stopping this powerful young athlete.

Congratulations to Milwaukee, WI. USA Gymnastics, the governing body for gymnastics in the US, has chosen the city to host the 2017 USA Championships. Athletes from all around the country will compete in acrobatic gymnastics, rhythmic gymnastics, on the trampoline, and in tumbling. The 2017 competition will also be a part of the selection process for the World Championships later next year. The Milwaukee event will be held from June 27th to July 7th, and tickets will go on sale at the beginning of 2017. The website usagymchamps.com has more information on the 2017 USA Gymnastics Championships.

The USA Gymnastics Hall of Famer, John “Jack” Beckner, passed away Wednesday, November 16th. He was part of the Olympic team in 1952, 1956, and 1960. In the Melbourne, Australia games in ’56, Beckner qualified for the finals in the horizontal bars and finished in 7th place. He went on to coach the Olympic team in the 1968 games in Mexico City, Mexico. For 24 years, he trained the gymnasts at the University of Southern California and judged at local, national, and international events. He was awarded the National Judges’ Hall of Fame Cumiskey Award in 1989. More information about John Beckner’s athletic achievements can be found at sports-reference.com.