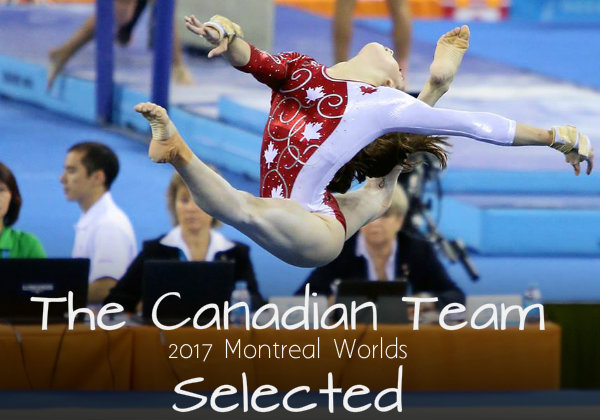 More than two months before the start of the competition, Gymnastics Canada have borrowed a move from the Japanese handbook of worlds team selection and announced early the gymnasts that will compose the team.

“I think the key aspect of the process going forward is the ongoing verification. The athletes that seem to have the best chance to achieve the objectives were named by the process and we have two very strong alternates that could step in as well depending on how the ongoing verification goes between now and the final camp in Sarnia.” said Dave Brubaker, National Team Director for women’s artistic gymnastics.

Here are the four selected gymnasts:

Following her successful olympics, Black took a break from competition and started competing again over the past couple of months showing promising shape at the Canadian Championships where she showcased signature floor tumbling and beam difficulty. She claimed her 4th Canadian all around title. In the world cup circuit she placed 2nd on bars, beam and floor at the Koper World Cup ( she had a huge difficulty score of 5.9 on bars).

First year senior she began her impressive 2017 journey with a bronze all around at Gymnix in March. Moors had one of the most talked about performances at the 2017 Canadian Championships with upgrades on all events, finishing 7th all around. Most notably she threw a very special floor tumbling pass: a Podkopayeva (double front 1/2 out):

The 17 year old was a Rio olympian, where she qualified to the vault final finishing 8th. Olsen is a very consistent vaulter and has competed an Yurchenko double full and a Khorkina (round off half on 1 1/2 tuck). However she has shown that she is capable of an Amanar in Rio and this puts her in contention for a possible event final medal:

Isabela is another member of the 2016 Olympic team that (barring any unforeseen circumstances) will get to represent her country at the 2017 Worlds. She had a fantastic 2016 with great all around performance in the competitions leading to Rio (2nd in Stuttgart, 10th at the Test event, 1st at Nationals), while in Rio finished 18th all around and 8th in the balance beam final. Her comeback meet after the Olympics was the Canadian Championships in May where she looked great on beam and displayed good potential for improvement all around (finished 4th):

The 24 year old and Georgia Gym Dog has successfully combined both elite and college gymnastics for the past 2 years. She was included in the Canadian Rio Olympics team (her 2nd Olympics after London) and has then decided to stay in elite with the goal of qualifying the the 2017 Worlds hosted by her home country. At the 2017 Canadian Championships she showed a good (yet not perfect) uneven bars routine, but stumbled on vault and did not compete on floor.

Rose was a member of the Rio Olympics team and the silver winning Pacific Rim Championships team in 2016. She had consistent performances at the 2017 Canadian Championships  finishing 2nd all around.

Looking at the six gymnasts selected and the solid performances they have had so far this year it must be a bit disappointing this is “only” and individual worlds; they would have been able to contend for a medal as a team.

In a three per country per apparatus qualifying scenario I see Black and Onyshko competing all around, Olsen will probably do vault and bars while Moors should do floor and beam.