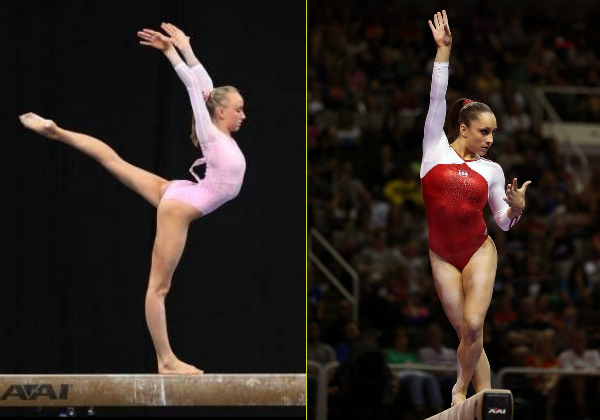 Each year, there are several competitions gym fans can look forward to, in order to see their favorites gymnasts and countries compete.  Worlds, obviously, as well as Europeans, perhaps the American Cup or some national championships.  One such competition that I have grown accustomed to watching is the Pacific Rim Championships (formerly known as the Pacific Alliance).  Countries that share the Pacific Ocean are invited to a springtime team competition.

This List will be pretty specific, as I noticed something about Pacific Rim beam and the American team—the stars of the team put forth some of their best beam sets ever!  This is impressive, since it is early in the season, and because these are already notable beam workers.  But I wonder if these routines are one of their all-time bests?

The Pacific Alliance in 2004 took place in Hawaii, and the USA team featured gymnasts who were considered to have an outside chance of making the team.  But the star for American team, world all-around runner up, was also there.  While Patterson watered down her routines a bit (and made a mistake on the last rotation on bars, which ultimately cost her the all-around title), she showed her traditional light and fluid style on the beam.  While her Olympic routines were crisper, she moved with great confidence and showcased why she would eventually become an Olympic medalist on the event.  This routine scored a 9.8—

I often thought Liukin may be the first gymnast to score a 10.00 in the new scoring system.  She had the ability to perform a lithe and consistent beam that the judges loved.  This routine was as a close to perfect as I had ever seen her do!  As a two-time World Champion and eventual Olympic medalist, Liukin was already a marvelous beam worker.  But this set was rewarded with a 9.800 execution score because of its flawless movement and pace—pure poetry in motion!

Known for her difficult beam set, Wieber had great moments on the apparatus throughout her career in 2011—Worlds all-around, American Cup, World medalist.  Going into 2012, Wieber changed up her beam set to include complex combinations and tricks.  While these combinations would not always pay off, she patiently worked through them at a natural pace at the Pacific Rim, earning a 15.700.

Which of her combinations do you think served her best?

Lastly, we have the two-time World Champion and eventual Olympic medalist on beam.  Showcasing a 6.5 difficulty value, Biles excelled at every turn in this routine.  While we have clearly seen powerful sets from Simone throughout her career, this is a set that was dynamic from beginning to end—there was absolutely no let up.  Completed with a stick of her full-in dismount, Biles wowed the crowd with her total command of the apparatus.

Earning a 9.050 in execution—do you think that was too high or too low (or just right?)—

There must be something in the air at the Pacific Rim that inspires the American stars to bring their best to beam that day—I’ll be excited to see who comes through in 2020 with a performance for the ages!

Are there any meets you have found to showcase a significant star power on a certain apparatus?