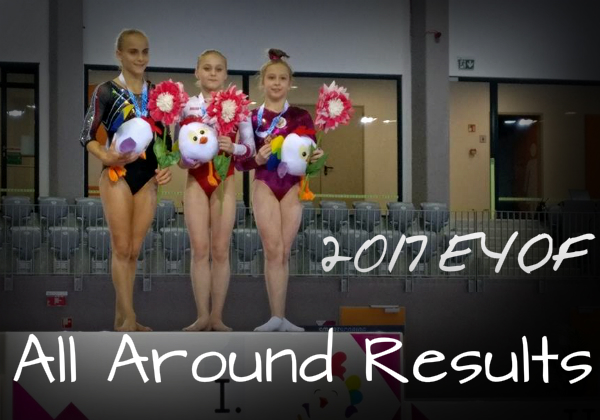 In the 2nd day at the 2017 EYOF Russia and Italy continued their European domination.

2003 born Russian, Ksenia Klimenko , won the all around title. She was precise, graceful and consistent. Her total was .1 higher compared to Wednesday’s qualifications (54.450). Klimenko was impressive on bars (Stalder full to Van Leeuwen inbar stalder, pike Jaeger to Pak, toe-on Shap, double front half out dismount – for 14.15/5.8) and beam (side aerial to layout stepout, front handspring to front tuck, aerial walkover to sheep jump – 14.05/5.8). Her weaknesses are vault (FTY) and floor tumbling but at this level judges are looking for correct execution, flow etc. and tumbling is not that important.

Asia D’Amato from Italy finished 2nd with a total of 53.75. Her best routine was vault , an Yurchenko double full, for a 14.5, the highest score of the day on any event.  She scored in the mid 13s on both bars and beam and had some troubles on floor. Asia’s style is not as balletic (lly informed) as Klimenko’s but she has a refreshing determination with which she approaches each routine and shows  thoughtfulness and patience in attacking each element and correcting when things are a bit off, which are trademarks for a champion of the future. Among the juniors in Gyor she is also one of the outliers with some more serious floor passes (double Arabian, full in).

Varvara Zubova earned the bronze medal after hitting a huge balance beam routine and consistent even though less shiny performances on the other three events. Over the past 2 years Zubova has earned many admirers due to her impressive beam work. Even though they remained supportive, the fans eventually started getting used to accept the situation (0r the disappointment) as Varvara  showed up at various meets with great routines followed by less consistent performances when medals were at stake. In Gyor the usual series of events was reversed and, unfortunately, she missed in qualifications but, fortunately, hit in the all around final.

Elisa Iorio (Ita) and Taeja James (GBR) finished near the podium (4th and 5th) and nearly gave Zubova a run for her money.

Another one to watch in the future is Celie Serber (Fra), who finished 6th. Although her scores don’t really reflect it she can work with good rhythm on bars (and has a layout full dismount) and has some good elements on beam and floor with potential for exquisite execution (once the nerves pass).

Emelie Petz (Ger) and Anastasia Bachinska (UKR) who had qualified 3rd and 4th respectively had a disappointing competition with multiple falls finishing 10th and 11th respectively.