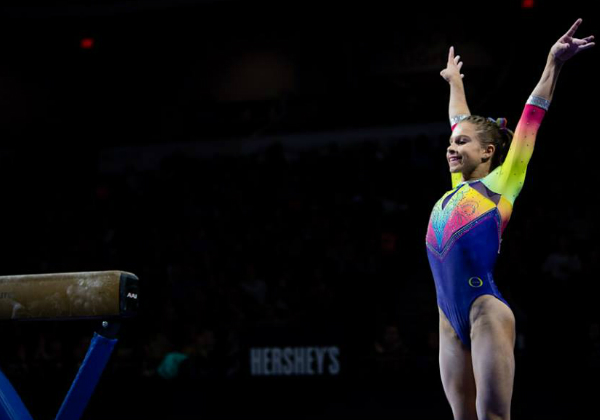 Some of the favorites of this year so far did not compete all around at the 2017 US Classic thus opening the door to the podium.

Alyona Shchennikova won the all around competition after a good competition: she did a clean Yurchenko double full (with a hop) in the first rotation (14.35/5.4). Her best even was bars with a clean execution: inbar Stalder full to Komova II to Tkachev, Ricna to Pak to Chow half, double layout. The only weakness of that routine seemed to be the low landing on the DLO dismount. On beam she had a clean set (nothing too exciting though – triple wolf turn, double wolf turn, flick – loso – loso) but unfortunately fell on her double back tuck dismount. She finished with a clean floor routine: full in pike, 1 1/2 to front full, double back pike, double tuck.

Kalyany Steele and Luisa Blanco tied for third with a total of 52.9. Steele had a good DTY on vault and a hit beam routine (standing Arabian, flick -loso-loso) but was heavily penalized for form errors on bars (13.15/5.6) and floor (11.9/4.5). Blanco had good execution on al four events but difficulty in the 4’s on vault bars and floor. Her stand-out event was beam (ring jump, switch ring leap, flick- loso) for a 14.3/5.5.

The only two gymnasts that are potential locks at this point for a 2017 US World team were Ragan Smith who won bars and beam and Jade Carey respectively winning vault and floor. Smith presented a 6.0 bars set: inbar Stalder to inbar Stalder full to inbar Stalder to straddle Jaeger, Downie, Ricna to Pak, full in dismount (14.55). On beam she presented a couple of upgrades:  double wolf turn, back handspring to layout to two feet, standing back tuck full, pike front, side straddle jump 1/2, split jump 1/2, aerial walkover to split jump to straddle jump, flick – bhs- double pike for the highest score of the evening 15.35/6.2.

Riley McCusker had a rough competition overall after huge form breaks on bars, a fall on dismount on beam and landing issues on floor. She told the media before the competition that she has faced many health issues since Jesolo this spring which prevented her from training consistently. Her most recent wrist injury only healed completely a few weeks before the competition and thus she will be looking to improve a lot by Nationals.

Morgan Hurd only competed on beam and floor but she will also look to improve her performances: she touched the beam after the standing full and then gave a good yet nervous performance on floor (still won silver with a 13.85/5.4).

Ashton Locklear only competed beam but sadly fell on the dismount. Despite a not very exciting routine she showed good difficulty of 5.7 and clean execution (except for the dismount).

Based on the routines presented at the US Classic, if Worlds were next week the gymnasts selected would be:

Assuming that Ragan is ready to do the all around and is just preserving her body at this time, I would switch Paulson for Trinity Thomas who was third on UB and BB.

Here are all the results: