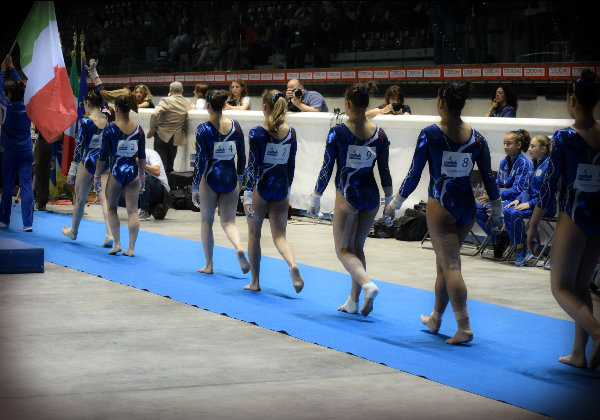 Italian nationals ended today with an outcome which was quite predictable since a few months ago. Starting on the bright side, the junior team showed again its strength and the potential to be great in a few years. Indeed, the juniors won three gold medals, leaving the first place for the seniors on both beam and floor, where they managed to earn a silver and a bronze on both. On the other side, the senior team looks unprepared, weak and with too many issues to make a good impression at Montreal’s Worlds. Vanessa Ferrari, Martina Rizzelli, Sofia Busato, are all injured, Martina Maggio, who was the most likely AAer of the team, suffered a dislocated patella, which won’t need surgery, but she’ll need to get surgery on one foot as soon as she’ll be able to walk again. Then there’s Erika Fasana, who competed just on bars because she’coming back from surgeries**, Carlotta Ferlito**, who competed just on beam and floor, and **Elisa Meneghini**, who’s struggling with motivation and with a leg ache, who decided not to compete on floor. With all these problems from the veterans, you’ll expect to see the new seniors coming for the medals and showing their value, but that’s not what happend.

GOLD: Surprising many people after her lackluster performance at the EYOF, Elisa Iorio won the title with 4 hit routines. Her DTY looked better than in the past, but still with a rough landing(14.10), she hit her famous bars without connecting the endo 1/1 to the double front ½ dismount (14.00), had solid routines on both beam and floor (13.20) (13.10) for a good 54.40 AA total.

BRONZE: Her twin Alice took the last available medal upgrading again to the DTY, not great but solid (14.30), and hitting all the other routines with some minor flaws here and there, 53.900.

Martina Basile, a 2002 girl, came in fourth with a good competition too. Her Yurchenko 1 ½ stille needs work in the execution side, but she unveiled a brand new double layout on floor and also a layout full on beam, which she didn’t compete but hit in training.

The first of the seniors was Sara Berardinelli, who became famous after a video of her coach saving her from a disastrous Tkachev went viral. Sara hit pretty much everything she could, a nice FTY (13.60), a solid floor (12.85 and earned one of the (sadly) better scores on beam, 13.35), but right now her programme is definitely too easy to aim for an AA place.

Speaking of the other gymnasts, here’s breifly what happend.

Seniors Giada Grisetti and Noemi Linari fell all over the place, they’re definitely not ready for a big competition like Worlds.

Speaking of the veterans, Erika Fasana hit bars despite a few form issues and a very low D score (5.1 13.55), Elisa Meneghini, who was supposed to compete the AA but decided to sit floor due pain on her leg, had a very rough competition, falling on both bars (straddle jager) and beam (layout). Elisa hasn’t really had health problems, and 2017 could have been her chance to shine, but the lack of motivation has really hit her hard and, honestly, I won’t be surprised if she decides to retire.

Enus Mariani, who’s the queen of injuries, doesn’t look good too, with low D scores and bad execution. She had a simple yurchenko layout on vault, fell twice on bars and hit a too easy beam routine. Again, I won’t be surprised if she decides to retire.

Finally Carlotta Ferlito, who returned to competition after Rio. Carlotta fell twice on beam (bhs mount and loso) and didn’t look prepared enough, with wobbles and not creditable leaps. She performed a new floor routine with a La La Land medley, which was funny and entertaining as always, but just did a 2 ½ twist punch front tuck (OOB), double piked and double tuck (13.15).

Honorable mention: Little star Giorgia Villa came back after the injury she suffered in Jesolo and hit a very clean bars set (14.00).

SILVER: Desireè Carofiglio with her always messy yurchenko 1 ½  and a messy tsukahara 1/1. Average 13.65.

BRONZE: Arianna Rocca went for a stuck tsukahara1/1 and handspring pike ½ with a step oob. Average 13.625.

The fourth competitor, Caterina Vitale, completely crashed the DTY and got a 0 for that. Then went for a nice handspring front tuck. Average 6.3

This was the best final of the day I guess, quite surprising since it’s been the worst apparatus of the Italian team for a while.

A huge splatfest, one of the worst final I’ve ever seen.

Enus Mariani came in last place after a fall on the bhs+loso serie after a very easy routine (4.4 10.70).

This apparatus, which used to be Italy’s best, had a very luckluster final.

GOLD: Lara Mori who hit her new routine (13.20) which should have a very good D score (double layout, 2 ½ to front layout, full-in, triple twist, 5.6) but since she was given a 5.1 D score,  the triple twist was probably downgraded and she lost the entire pass (she already has a 2 ½ twist).

Elisa Iorio was cleaner than usual (full-in, triple twist a little underrotaed, double piked, front handspring to front 1/1 to sta, 5.0 12.95) while Carlotta Ferlito upgraded the double tuck to a full-in and hit a very nice routine (Gogean, 2 ½ twist to front tuck, full-in step oob, Memmel + double turn, double piked , 5.1 12.90) underscored compared to all the others honestly. At least because she’s one of the few who actually tries so sell the routine.

Out of the 15 available medals, the juniors caught 11 of them, with only Lara Mori, Sara Berardinelli, Desireè Carofiglio and Arianna Rocca breaking the curse. Even if this is a very good sign for the sake of Italian gymnastics’ future, the lack of preparation, motivation and competitivness of the senior is quite disappointing. The excitment for the 2003 girls has left a big hole on the planning of this year and the next one and, in my opinion, Enrico Casella, the National Team Coordinator,  should have known better what the situation was and should have tried to give the seniors more attention.

Of course, Casella was not pleased at all with the results. She praised the juniors, claiming the Tokyo team will be constructed around Villa, Iorio and the D’Amato twins (not a very good thing to say for the motivation of the other girls), and had harsh words for Ferlito, Linari and all the other seniors who had a disappointing weekend. He also said Lara Mori is going to Montreal for sure, and that there won’t be another AAer but 3 specialists. I think Carlotta still has a chance to be selected despite the awful beam of the first day. She has a month to improve her steadiness and her floor is already looking good even if not too competitive. Erika Fasana is probably out since she’s just ready on bars, where the hope for a final is non existent. Desireè made a case for herself with her floor, but the incosistency she has on both bars and beam could be the cause she’ll be left at home. Also Sara Berardinelli improved her chance by having the best AA score of the seniors and winning beam, while I think Elisa Meneghini is already out of contention.

The girls will have another chance to show their routines in the last Serie A meet in Eboli, 15th/16th of September, where the team will probably be finalized.