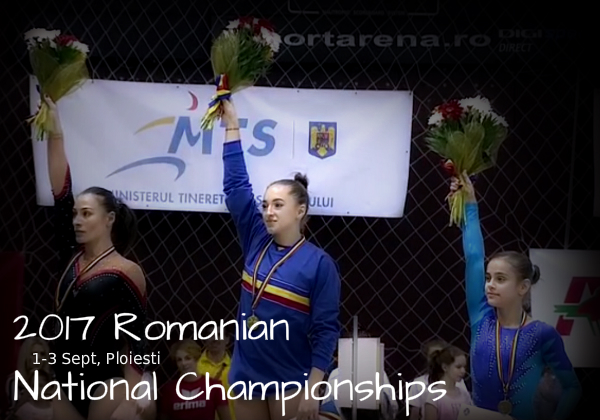 2017 Romanian Nationals ended with the even finals that took place on Sunday.

Larisa Iordache continued her categorical domination with three gold medals on each of the event finals she had qualified to: bars, beam and floor. On bars she upgraded her dismount to a Fabichnova (double twisting double back tuck) for a 6.2 difficulty. She wobbled her way trough her two big balance beam skills but, on the plus side, the layout full twisting tumbling element was more stretched compared to day 1. On floor she looked fabulous and now I hope she doesn’t upgrade further for worlds (her passes are full in, 2 1/2 to front layout, triple full, double pike) and rather works on hitting her dance elements and sticking landings.

After this weekend, a placement on the podium is easily attainable at Worlds, even with all the imperfections and risks she is taking across the 4 events. The fact that she hit 7/7 routines in Ploiesti, including two very difficult beam routines, shows her strength, considering that earlier in the week she traveled from Taipei so she did not get much training time back home.

Denisa Golgota won the vault title (Yurchenko double full, Tsukahara full) and the bronze on floor, despite stepping out of bounds on the double Arabian (her other passes were  1 1/2 to double back, full in, double pike). Denisa was rewarded with a well deserved 13.6 on floor (5.2 difficulty).

Catalina Ponor won silver on beam and floor.  On beam she has a new layout mount which seems to intimidate her a bit (she took steps both days), the flick loso loso acro pass looks great, but she is counting on hitting numerous intricate connections to get her full D score which seems to take a toll on execution at this time in her preparation. She looked much better compared to the previous day but was still hesitant on beam and had some iffy dance elements on floor.

Overall, Ponor had an underwhelming competition, on her opening beam routine on Saturday  she fell twice, after which she was visibly shaken.  She managed re-focus slowly and improved with every routine but she will have to show much more in Montreal in order to be able to qualify for event finals or fight for medals. Her beam routine will be much more confident in 4 weeks time. But  floor looked a bit disappointing, especially her dance elements.