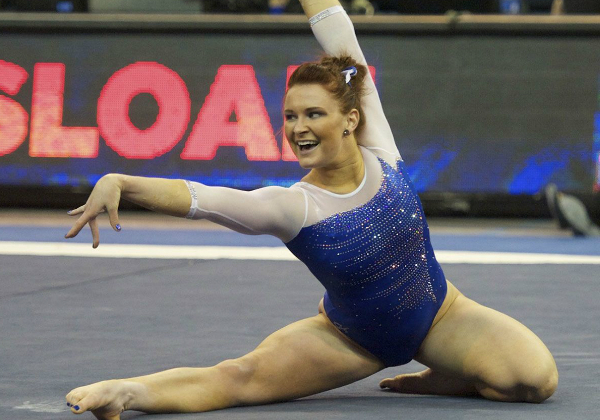 In the United States, we have the opportunity to continue watching many gymnasts’ careers through their participation in the NCAA.  Nowadays, more and more Olympians and World Champions are choosing NCAA over professional gymnastics, allowing fans to savor their performances for four more years in a team-oriented event.  Simultaneously more casual yet just as competitive as the elite world, NCAA gymnastics is definitely a different environment than training for the Olympics, yet it gives gymnasts a ‘new life’ so to speak.  While this current crop of NCAA gymnasts features many stars and fan favorites, this List will look at years past and highlight a few stellar careers worth celebrating!

Lucy was an elite gymnast in early 1980s, standing out as a great uneven bars worker.  She was an alternate on the 1984 Olympic team after an impressive 5th place finish at Olympic Trials.  Lucy joined a burgeoning GymDog program, which was looking to overthrow perennial champions Utah.  Lucy was a part of Georgia’s first of many teams to win a national title (1987), and she won bars at nationals in three of her four years.  She also earns the distinction of being the first gymnast from any program to score a perfect 10 (on bars, of course) at the national championships.  Today, Lucy serves as a judge, regularly seen at elite competitions. Honestly, she was amazing on bars.  Check out these skills!!

Perhaps the greatest gymnast from a program that never won a national title, Jenny won an unprecedented three national all-around titles.  She won her first title in 1993, scoring a 10 on vault.  She won her second title in 1994, picking up wins on vault and bars as well.  In 1995, she again scored a 10 on vault on her way to her third all-around title with a score of 39.8.  She also won every event except bars.  In 1996, she was on her way to win a fourth all-around title before swallowing a 9.450 on beam, though she did score another 10 on vault.  In all four years, her team never once made Super 6, but she was able to shine and thrive, which should happen when judging is based on performance, not team name!  In 2006, Jenny was honored at the 25th anniversary of gymnastics as an NCAA sport—she won ‘Most Outstanding Gymnast’—a worthy title, indeed!  Still in phenomenal shape, Jenny works as a stunt person, and she even made a run for the 2012 Olympic team!

Because her team was not as prominent, there isn’t nearly enough footage of Jenny, but here is a great look at three of her events at SECs from her freshman year. (And as an added bonus, a quick clip of her being honored in 2013!)

A solid gymnast in the mid-1990s, Andree was on the national team for four years, but she did not get a lot of press during the Magnificent Seven era of USA gymnastics.  After competing at the 1996 Olympic Trials, she moved on to Tuscaloosa and the Crimson Tide.  There, she thrived, showing off her power and sass on floor, as well as her steadiness and control on beam.  She was the SEC Freshman of the Year and the SEC Gymnast of the Year for her remaining three years.  Though she tore her ACL right before Nationals her junior year, she came back her senior year to lead her team to the national title in 2002.  She also won a national title on beam (1999) and bars (2002).  After her competitive career, Andree tried her hand at track and field, even competing at the Olympics Trials again in 2008, this time for pole vault!

Here is her floor during her senior year—ending with a double tuck!

A staple of the 2000 quad, Jeanette was a member of the national team since 1995 and competed in several international competitions, including the 1999 World Championships.  After competing at the 2000 Olympic Trials, Antolin continued to compete with Kristen Maloney, Jamie Dantzscher, and Alyssa Beckerman at UCLA.  But Jeanette struggled initially; she became more involved with the social aspects of college, and she was unable to maintain the standards that Miss Val expects of her athletes.  Removed from the team after her freshman year, Jeanette saw the light and got back to work, training on her own.  Her teammates appealed to Miss Val, who welcomed her back.  Though Dantzscher and Maloney had more record breaking careers, Antolin was pure heart and gave everything to her team.  And not to be outdone, Jeanette went from being a vault specialist to a top all-arounder, earning fourteen perfect 10s while helping UCLA win three national titles.  Years later, Antolin, along with Dantzscher, was at the forefront of speaking out against Larry Nassar.  Antolin has detailed the abuse she endured by Nassar, while being coached by Don Peters, who is now banned as a result of his own sexual abuses since the 1980s.  Antolin has also been vocal about the culture of abuse in USA gymnastics under the helm of Bela Karolyi.  Truly one of the most inspiring stories of redemption, Jeanette continues to serve as a role model for her bravery and ability to rise above when so many worked against her.

Jeanette’s triumphant routines at Super 6 in her senior year—

After a nagging back injury kept the World Champion from fulfilling her Olympic dream, Hollie disappeared a bit from the sport.  She decided to compete NCAA, signing on with the good-but-not-quite-breakthrough Sooners.  Then Coach Steve Nunno (remember when he coached the team?) wanted her to be a beam specialist, but KJ Kindler came on as head coach soon after, and she pressed Hollie into more service.  Hollie, who was out of shape and had not been training as intensely, was initially scared to step up in such a big way, but Queen KJ was the perfect mentor for her.  Under their direction, Oklahoma began to blossom into one of those breakthrough schools, eventually becoming the powerhouse they are today.  Hollie may not have won tons of national titles, but she brought notoriety to a program that was on the brink of something big.  She also persevered and pushed herself, going from beam specialist to all-arounder.  The true success of her story was a new relationship and love for the sport that, years earlier, left her disappointed.  As we see with so many former elites, NCAA allowed Vise to a new chapter and new life in the sport (as well as her future family—OU is where she met her now husband, Alex Naddour, who competed for the men’s program!)

The Gators had several strong years and moments of great success, but when Rhonda Faehn took over in 2003, everyone knew she could be the one to bring UF to a new level.  After a few good years of recruiting, Faehn scored the jackpot with World and National champion Bridget Sloan, who was also an Olympian.  Bridget deferred enrollment so she could try for the 2012 Olympic team; unfortunately, an injury kept her out of Olympic Trials.  But when she arrived in Gainesville, it was clear that Bridget found her new calling—dominating NCAA gymnastics.  Bridget and Co. won three consecutive national titles, joining Utah, Georgia, Alabama, and UCLA as the only schools to win (eventually to be joined by Oklahoma, of course).  Her accolades are many (first Gator to score a perfect 10 on every event, two-time national all-around champion, Honda Award winner……), but it was the joy of watching her perform, lead her team, and soak up the NCAA gym experience that fans savored.

Watch her fierce and determined demeanor on floor in 2015—‘tough as nails!’

There are literally a million other gymnasts I could highlight, but I tried to give you a List that covers different eras and teams.  OF COURSE I am forgetting…….

Tell me who in the comments!!  Keep the List going!