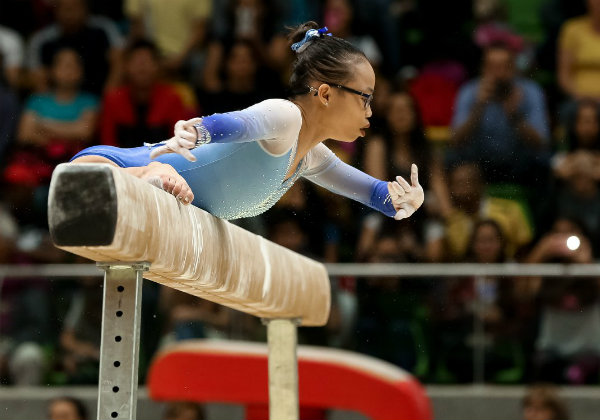 As the first quarter of the elite season of 2018 comes to a close, let’s look back at the performances of the American gymnasts at the World Cup events.

This year, the American Cup took place in the suburbs of my hometown, Chicago, so I was in attendance for this event.  Coming in to the competition, I was super excited for the senior debut of Maile O’Keefe, the two-time junior national champion.  And, of course, it was a pleasure to see the World Champion, Morgan Hurd, compete!

To be honest, I was not expecting Hurd to look so solid- it is early in the season, after all, and I thought we would see work-in-progress routines from Hurd.  Well, I was definitely wrong, and I’m glad I was!  Hurd appeared confident and prepared throughout the competition.  Her double twisting Yurchenko showed plenty of power, fueling Amanar rumors.  She scored 14.566, a slight improvement from her score at Worlds (14.533).  She was phenomenal on bars, showing tons of upgrades.  Her E score was only 8.1, so she has tons of room to bring that up and be even more competitive here.

It was after beam that I knew Hurd had it in her to win this competition.  She’s obviously good on this event (silver medalist at Worlds, after all!), but we’ve seen nerves and inconsistency get the best of her.  But at the American Cup, Hurd moved swiftly and with confidence that is encouraging for the rest of her year.  By the time we got to the fourth rotation, everyone sat back to enjoy her charming floor- then we all IMMEDIATELY sat up when she stuck her double-double cold!  Overall, Hurd was a delight to watch, and her increase in skills and confidence since Worlds was awesome to see.  She was coming back from an injury at last year’s nationals, so she didn’t stand out as much; if she can stay on this path, I hope she will be able to show everyone that she is just getting started!

Finishing third with a less consistent day was O’Keefe.  She appears to be a bit taller since her days as a junior, and I think she clearly has the training and skills behind her; I think she just needs more time with her new body line.  I really hope she can make the adjustment, since she has been such a joy to watch the last few years.  She scored a 14.600 for her double twisting Yurchenko, which is right in line with her better scores in the last year.  Unfortunately, she counted three scores in the 13s for the remainder of the competition.  She shocked everyone by catching her jaeger on her heels AND STAYING ON.  It was a shame she made the mistake, since the rest of the routine showed how tough and strong she is-

I was hopeful O’Keefe would come back solidly on beam and floor, which are normally very good events for her.  But she randomly fell on her wolf turn mount, which is so unlike her- in fact, she is one of the best wolfers currently out there!  But once again, she got up and showed tons of grit and grace throughout the rest of her routine.  Floor was also good, despite an out of bounds.  I’m sure she wanted to do better, but I was so proud of her efforts, and I cannot wait to see how she fares later in the year!  Again, I think she just needs some pacing and time, but the foundation is set.

Jordan Chiles, the non-traveling alternate for the 2017 Worlds, was selected to compete at the World Cup in Germany.  Chiles raised eyebrows by winning the US Classics in 2014 as a junior; she finally made her senior debut post-Rio last year.  After a second place finish at Nationals (helped out by a spectacular save on her wolf turn on beam), some were surprised when she was not selected for Worlds.  Stuttgart was a great chance for her to show off her routines for the new season.

As expected, her vault and floor scores were stellar.  Chiles has a natural affinity for the power aspects of the sport.  Her double twisting Yurchenko in addition to her 1.5 though to double Arabian, double layout, double pike, and double tuck on floor will serve her well as she builds towards Worlds this year.

But consistency is key in an all-around competition, and unfortunately Chiles showed some cracks in her portfolio.  She overcooked a Tkatchev on bars; when she chalked back up, she repeated the skill, connecting it to a Geinger before showing off her dismount series and ending with a complete stick.  While this is not her strongest event, she can get a competitive score if she hits.  She can also put together a nice beam set, but she went wild on a leap series in Stuttgart.  Coupled with wobbles on several other skills before an incredibly high and powerful double pike dismount, Chiles was left with a 11.733.  All in all, it was a bit of an uneven competition for her, but she still walked away with a bronze in the all-around.  This is a testament to her strong program and ability to regain focus, even after a few hiccups.  After missing a trip to Worlds in 2017, you know she is itching to compete for Team USA this year, and every experience on the international stage will help build her confidence!_ _

Margzetta Frazier was selected to compete in England.  As a first year member on the national team, this was a great opportunity for Frazier, who was told earlier in her career to give up on her dream of competing elite.  Fortunately, her current coaches at Parkettes have worked well with Frazier to help her accomplish what she puts her mind to doing.

Frazier began on vault with a double twisting Yurchenko that was a bit short and incurred a one tenth neutral deduction.  She came back in the second rotation with the highest scoring bars routine of the night.  What was great about her bars set is that you can see how it is still a work in progress- she will continue to tighten up her connections and form, but the skills are there.  She survived beam, but swallowed a 7.033 E score due to minor and major wobbles throughout.  But what I love about her on beam is how calm and collected she looks, even before a big skill or after a wobble.  She remains tight and focused and carries on, which is a valuable attitude for Team USA.

Her shining moment came on floor, where she posted a 13.433 for the second best score on that event.  This is where you can see Frazier let loose and really give all of herself.  She was solid throughout the routine, and the extra fist pump after her stuck double tuck dismount put a smile on this gym nerd’s face!  A second place finish in the all-around with four good turns around the gym was a great result for Frazier, and I’m excited to see what upgrades she shows us later in the year!

Finally, Trinity Thomas earned the ticket to Tokyo (ahem, World Cup, not 2020…..yet!).  I have to admit, this was the meet I was most excited for, since I am wildly obsessed with Trinity.  I’ve seen her compete in person a few times, and she is captivating in the gym- confident, regal, and focused (she gives me 1994 Dominique Dawes vibes).  She may not have the most difficult programs yet, but I love watching her compete.  In addition to gymnastics, she also took up high school diving this year, finishing second at the state championships.  She is also doubling up on her school load so she can graduate early; she is committed to the University of Florida.

Thomas began her time in Tokyo with a good 1.5 twisting Yurchenko with a few messy steps on the landing.  Still, she earned a 14.033 for the third highest score on that event.  Bars is a great event for Thomas to show off her beautiful lines, especially on a stuck double layout dismount.  Beam was another mostly solid event, save a few wobbles and a squatted landing on her double tuck dismount.  But she does well with the complex twisting leaps that are so in vogue right now, and she does a one-armed back handspring into her layout step out, which is nice added touch.  Again, her difficulty has room to grow, but was enough to keep her competitive at this World Cup.

Floor was certainly a highlight of her day.  Despite some hoppy landings (she absolutely rebounds out of her double layout!), she pushed herself in both tumbling (2.5 through to double back) and choreography (her butterfly leap gives me life).  Thomas eventually finished second and made the most of her chance on the international stage._ _

Overall, it was a great World Cup season for the American team.  This summer should be interesting, as Simone Biles gets back to competing, Ragan Smith and Riley McCusker return from injuries, and stand out juniors turn senior.  Even as USA Gym still tries to figure out what to do without a training center or coordinator, the gymnasts are showing that they are committed to the sport and representing their team.  Other gymnasts competed at Jesolo and Pac Rims, and we will see how the team comes together after Nationals in preparation for Worlds!  Team USA has won the gold since 2011; can they keep the streak alive?