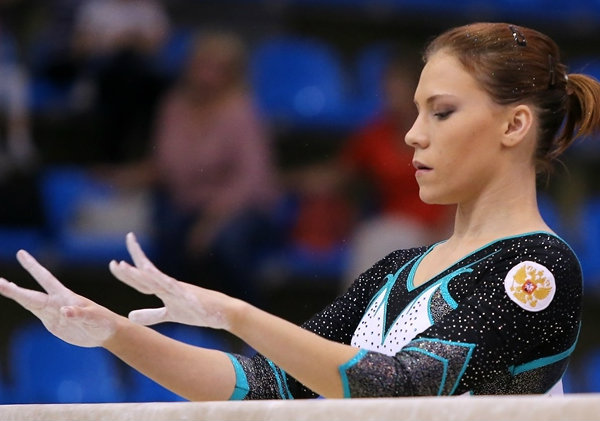 The Russian Cup concluded on Sunday, September 20th in Penza with mixed results, mixed messages, and yes, mixed emotions for this Russian-partial writer who had a business retreat last week and is just now getting around to processing this competition.

Without rehashing news that has already hit the gymternet, here are the results for each event, followed by some observations and routines:

Most Impressive: This is a close call between veterans Ksenia Afanasyeva and Maria Paseka (though if I had to put my money on it I’d go with the latter). Both have had a rocky time since the London Olympics, Maria with her chronic back problems and Ksenia with her feet. I don’t want to jinx anything, but it appears as though they’re pacing themselves just right. We saw signs of healthy comebacks at the European Championships earlier this year, and this latest competition has confirmed it. Both have watched younger teammates try to fill their shoes (most notably Alla Sosnitskaya), but in Penza, the Olympians proved their reliability. With a consistent Cheng and much improved (and more consistent) Amanar, Paseka is well on her way to making the Vault Final at the World Championships, and she can contribute to the team score on floor exercise and uneven bars, where her highest score in Penza was a 15.300 in qualifications. Similiarly, Afanasyeva has the the potential to make the Floor Final at world’s (though I’d like to see a less frightening triple twist), and she can contribute to the team score on two other events: vault and balance beam. Bottom line: Neither of these gymnasts are individual all-around threats, but it seems they’ve been intentional about stepping up their game on events that are not, historically, their specialties. This is good news for Russia, as the past two years of world selection has been a stressful game of stretching specialists beyond their capacities. Even with the possibility of Mustafina’s absence this October, the puzzle is coming together much more easily than it has in the recent past. And that’s mostly due to the return of Paseka and Afanasyeva.

Most to Prove: Viktoria Komova and Seda Thutkalyan. Somewhat surprisingly, it’s the majority of the European Games trifecta that will have some extra work cut out for them at the pre-world’s training/selection camp. I think it’s safe to say that one of them will go to Glasgow for sure; the question is whether there’s reason to take both.

Viktoria Komova was breathtaking on uneven bars when she hit, and she hit both routines following a botched qualifications. She is mostly reliable on this event; she would contribute well to a team total (she could always downgrade her dismount to play it safer) and she would have the potential to medal in the Event Final. The problem is that there are two, and possibly three teammates whose scores are mostly on par with Komova’s, and even more teammates (unofficial All-Around champion Angelina Melnikova and Daria Skrypik) who will be turning senior next year. It’s just not an event that Komova is dominating within her own team anymore, and to be a specialist, she’d need to give the impression that she’s irreplaceable. Sadly, I think the biggest issue is that she won’t have another chance to prove (if the coaches are leaning towards not taking her to Glasgow) or to practice (if they are planning to take her) her other events in a competition setting before the World Championships. I didn’t see a lack of stamina, athleticism, or sheer will in Penza. What I saw was too much nervous energy working in the wrong direction. She must feel like she’s under a magnifying glass. The key for her will be to translate that pressure into the kind of adrenaline she can use. If it were up to me to decide, I’d take her to Glasgow despite the three falls on balance beam. I think Russia has more to lose by not giving her a chance to work on those competition nerves before the Olympics.

As for Tutkhalyan, I imagine she’ll need to show a greater deal of consistency in these final weeks at Round Lake. Falls on balance beam and floor exercise don’t bode well for a team that needs higher consistency on both, but her all-around potential, her ambition (did you see her Bhardwaj on bars, unveiled in the Event Final?), and yes, her ferocity work in her favor. It’s also worth noting that Seda tends to compete better in international events rather than domestic ones. So, there’s that.

Most Surprising: Daria Spiridonova, for different reasons. I was pleasantly surprised to see Spiridonova deliver consistently clean balance beam routines after years of struggling to calm her nerves. Her falls and big balance checks were always frustrating for the spectator (and, I imagine, even more so for Daria herself), because despite them, she had a lovely look on the apparatus. She gave the impression that if you took away the bright lights and eyewitness, she’d be killing it. In Penza, she managed to put it all together with some special touches (a Kotchetkova, an Onodi to front aerial, a Y turn to full turn), making it clear that using her on this apparatus should still be part of the conversation. Equally surprising was her improved work on floor exercise, where she showed increased endurance. All of this made an all-around victory attainable, something I wouldn’t have imagined just a year ago.

In contrast, I was also surprised to see her come off the uneven bars in the Event Final. Despite Daria’s struggles on beam, her bar work as a senior has become incredibly consistent even as she’s upgraded her connections and improved her form. Watching her come off on her pirouette was not expected; if not for that momentary blunder she would have been champion. Although she’s undoubtedly disappointed, it’s also not a mistake that will cost her, or at least it shouldn’t. If anything, the anger might be productive. (Oook, I am not doing THAT again…)

Filling in the picture are Maria Kharenkova and the others Andrei Rodienenko named to the training squad: Anastasia Dmitrieva, Evgenia Shelgunova, and Alla Sosnitskaya. Dmitrieva didn’t climb the podium in Penza but has real potential on floor and balance beam. As the former event continues to be a weak spot for the team, consistent practices at Round Lake might be enough to keep the first-year senior part of the conversation. Likewise, Shelgunova also didn’t climb the podium in Penza but she placed a frustrating fourth in the all-around, on bars, and on beam. She has competitive D scores and is reliable everywhere. There’s certainly an argument for her participation to be made there. Sosnitskaya, for her part, is likely still part of the conversation because of her potential on vault and floor, especially if Mustafina stays home. She had a rather disastrous competition in Penza, painful to watch. My impression is that she needs more time to heal from the injury that sent her home from the European Championships. I hope she’s taking enough time.

As for Kharenkova, I was delighted to see her clinch the title on balance beam, her best event, especially after a somewhat shaky qualification routine. Her routine in the Event Final wasn’t perfect, but it showcased her dependability, a trait that follows her to other events and bodes well in a team competition setting. Even when she wobbles, she moves quickly and with purpose. She gives the impression that she’s got this, which was no small thing at a competition that saw so many falls.

In conclusion, it’s worth noting that Valentina Rodionenko has already named a preliminary World Championships team. Right now it’s Tutkhalyan, Spiridonova, Kharenkova, Komova, Afanasyeva, and Paseka, with Sosnitskaya as a possible alternate. I’ve thrown some question marks around some of those names because it makes sense to take the announcement with a grain of salt. The list could change three more times before the team leaves for Glasgow, especially with the mixed messages about Aliya Mustafina’s status and readiness/willingness for competition.

So, we continue to brace ourselves. Here’s hoping that whomever gets the final call is happy and healthy.

For a complete playlist of competition videos from Penza, check out Alyssia Spaan’s youtube page.