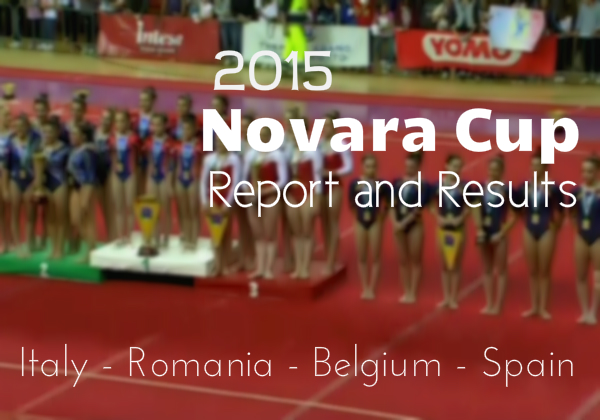 Last Saturday, near Milan – Italy, the teams of Italy, Romania, Spain and Belgium plus Jessica Lopez as an individual AA gymnasts, had their last test in the preparation for the 2015 Worlds.

Romania started the competition on floor, in the same order they will compete in qualifications in Glasgow (when Romania begins on FX in the 1st subdivision). It was a seemingly stress-free beginning with Iordache, Bulimar, Jurca and Ocolisan bringing the top scores. Silvia Zarzu fell on a triple twist and her score was the one dropped. Still, despite the one mistake, the team looked confident, with polished and well rehearsed routines. There is opportunity for improvement, as Jurca and Ocolisan gave away some landing deductions and will try to further clean up their executions for two weeks from now.

Vault was a far improved event compared to what we have seen from this team in the previous few months: they threw four DTYs, three of them landed very well (Iordache – Ocolisan – Jurca) and one with execution problems from Zarzu, but still scoring in the 14s. Diana Bulimar was able to execute a good FTY.

Uneven bars remains the most inconsistent apparatus before Glasgow: Ana Maria Ocolisan fell on a low to high bar transition, Diana Bulimar hit her Church release (the one that has troubling her at nationals) but fell on an overshoot to handstand on the low bar. The two less fortunate routines from the start were followed by good executions from Larisa Iordache (14.80/6.3) and Andreea Iridon. Laura Jurca could have improved the overall impression, unfortunately the pressure was too much to handle for her and she also fell.

It is tough to compete on beam after three major errors on the previous event but the team managed to regroup. Jurca opened for Romania with a nervous but hit routine. Diana Bulimar was solid and managed to dissipate all concerns while Iordache hit everything and earned the highest score of the entire meet (15.3/6.5). Iridon had the only fall of the team on this event – she hit all her acro series, leaps and Y turns but crashed the newly re-introduced double pike dismount. This element is still work in progress for her after last month’s injury so let’s hope the few extra days of training until Glasgow will make the difference. Ocolisan hit her routine and brought the 4th score on the event for Romania (13.6/5.6).

Italy had a very nervous debut on bars: only Tea Ugrin fell, but there were many execution errors and leg separations. Enus Mariani and Erika Fasana hit their routines, while Ferlito and Ferrari also scored for Italy on this event. In the second rotation Italy had a much better time on beam, with Ferlito managing a solid routine (and Italy’s highest score – 14.600/6.0).  Also scoring in the 14s with hit routines were Elisa Meneghini and Tea Ugrin. Enus Mariani brought the 4th score of the team, while Vanessa Ferrari fell on her acro series (flic – flic – layout stepout).

The entire Italian team had a blast competing on floor. Unsurprisingly this was also their highest scoring rotation (57.150 overall) and had scores in the 14s: Fasana was best with a 14.550, Meneghini surprised us as she followed in 2nd place on this event (14.400); Ferrari proved she could be ready with a few days of training (14.200 – DLO, full in, double pike), while Ferlito remained consistent (14.00/5.5).

Vault looked like a weaker spot for the Italian team: while Meneghini and Ferlito hit their 1 1/2 twisting Yurchenkos, those were not without form issues. Ferrari and Mariani also scored for the team with well executed FTYs.

Belgium debuted with a solid vault rotation and five well executed FTYs. With scores ranging from 13.95, down to 13.800, Lisa Verschueren, Rune Hermans, Laura Waem and Cindy Vandenhole were the 4 gymnasts that scored. Laura Waem had the team’s highest score of any event, on bars – a 14.450/6.1. Beam was kind of a troubled rotation for the team, with many mistakes but still 3 consistent scores in the mod 13s from Lisa Verschueren, Rune Hermans and Gaelle Mys. Their final rotation was floor and Lisa Verschueren delivered their best routine, with a 14.00/5.5; Rune Hermans, Gaelle Mys, Cindy Vandenhole also scored for the team.

Spain’s evolution was marked by a stunning come-back from Roxana Popa, who only competed on bars (14.5/6.0):

The all around competition was dominated by Larisa Iordache.  With her total of 59.750 she is now at the same level, from a scoring perspective, that brought her the silver in Nanning. It’s worth noting that this was without her Silivas on floor, which if re-introduced in her floor routine, will bring extra 3 tenths in difficulty.

Here is her floor from Novara:

and here is Larisa Iordache on bars:

The AA podium was completed by two Italians, Carlotta Ferlito and Elisa Meneghini, who had similar performances. An 1 1/2 twisting Yurchenko on floor, some troubles in their bars routine execution but stayed on, solid beam with a plus in difficulty for Ferito and a solid floor with a plus for Meneghini this time.

You van find all there results here: team and all around.