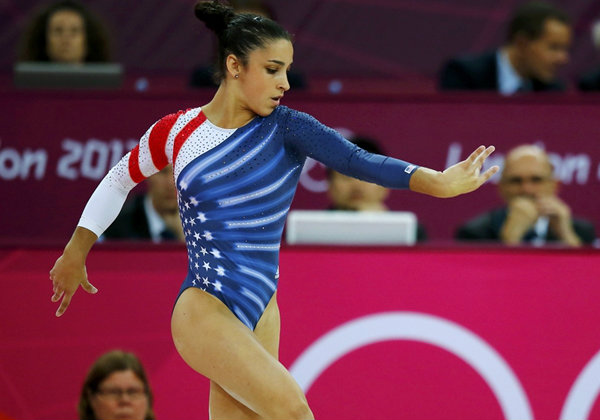 Another year, another competition where Team USA is not only poised to win gold, but win it by a wide margin. That much is clear.

What’s still unclear is who will compete, and who will serve as alternate. Complicating our speculation is the fact that three women are best used as specialists (Dowell, Kocian, and Skinner) and not necessarily as an alternate, which is better served by a solid all-arounder.

Despite that unanswered question, however, I believe we can safely assume the following…

Where they are strongest: Vault, as if there were any question. Even if Skinner is bypassed and/or one of those Amanar’s is replaced with a clean DTY from a discerning Raisman or not-quite-back Douglas, this team will set themselves up well with a high vaulting average. It has been and will continue to be their secret weapon.

** **Where they are weakest: This is a toss-up between uneven bars and balance beam. Tradition and presumption would point to the former, but I wouldn’t be surprised if balance beam turned out to be Team USA’s nemesis this time around. There’s a big question mark surrounding the line-up for bars (options including Biles, Douglas, Dowell, Kocian, and Nichols) but no matter the final arrangement, scores averaging in the low to even mid-15’s should be expected if everyone performs to her maximum potential. In contrast, beam scores in the the 15’s were harder to come by at the most recent competition, the P&G Championships. The team will most likely come out of the rotation unscathed, but it could very well be their least confident piece.

** **Who could make the All Around or Event Finals: In the All Around, the candidates abound. In addition to two-time World Champion Simone Biles, contenders include Maggie Nichols, Alexandra Raisman, and Gabrielle Douglas. Assuming Simone Biles doesn’t fall apart at the seams, the battle for that second slot will be one of the more interesting of the Championships.

On vault, Simone Biles and possibly Mykayla Skinner will be hoping for the Event Final.

On bars (again, highly dependent on who makes the final team of six), Brenna Dowell and Madison Kocian will be especially hopeful, Gabrielle Douglas perhaps less expectant but also a possibility.

On beam, if both perform well in qualifications, Raisman and Biles should make the cut. But it’s beam, so anyone from this team who competes has the possibility of making the Final.

On floor, again, if both perform well in qualifications, Raisman and Biles should represent.

The “Surprise”: Brenna Dowell, who came back to elite training after a successful NCAA season with the purpose of making this World Championship team. She counted some missed opportunities at the U.S. Classics and U.S. Championships, however, suggesting a lack of consistency. Her unique bar set and fate in Antwerp earned her a faithful following, but her inclusion on the team was mostly hoped for following the summer meets, not necessarily anticipated.

The Rock: As the leading all-arounder, I imagine Simone Biles feels a special responsibility to the team, but unlike their closest competitors, the USA could really do without her if she awoke with a fever the morning of the Team Final. This is probably the greatest psychological advantage Team USA has: no one is irreplaceable. No one needs to feel the weight of the whole on her shoulders alone.

The Best-Case-Scenario Finish: Gold, and I imagine anything less will sting.