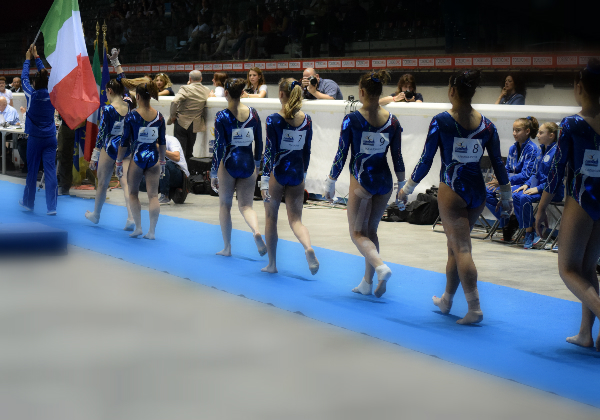 Italy has become quite a powerful team in the last years, one of the best outside the big 4. At last year’s Worlds, the team surprisingly came in 5th , surpassing   many other strong contenders. While in 2007 in Stuttgart Italy assured a spot for the Olympic games in Bejing, in 2011  things didn’t go very well, and the team had to compete at the Test Event in order to qualify for London. The team looked very strong and ready to directly earn a ticket to Rio a few months ago, but the foot injury of Martina Rizzelli happened last week, a tendon problem for Vanessa Ferrari and the microfracture of Erika Fasana, have really put in danger the team’s status.

Where they are strongest Italy is very strong on floor and is confirming the second place they got on this apparatus last year in the team final, was not random. With Vanessa Ferrari, Erika Fasana, Carlotta Ferlito, Elisa Meneghini and Lara Mori, the line-up is really competitive, with very good difficulty and nice choreography too. Also a good quality this team has is that they usually hit beam, even if this apparatus is not as strong as it used to be. Carlotta Ferlito has came back stronger on this event, getting rid of her messy 2.5 twist dismount, and the other girls are usually very confident too.

Where they are weakest Vault and bars, which actually are the highest scoring apparatus, suffer the lack of good specialists. With the injury of Martina Rizzeli, who has one of the few DTY of the team and a very nice routine on bars, the scores on these apparatus for Italy won’t be impressive at all. Enus Mariani is a nice addition, but the other scores on bars won’t go above a low 14, making Italy losing a lot of valuable points from the other countries. On vault we’re pretty sure we’ll see at least one DTY and 2 yurchenko’s 1 ½ , again not a great line-up for a strong team like Italy. Elisa Meneghini is rumored to have a DTY too, but I’m not too optimistic about seeing it.

Who could make the All Around or Event Finals Italy’s best AAer, Erika Fasana, won’t compete on the AA due a microfracture on her tibia and will sit beam, leaving 2 spots open. The National coach was clear about the goal of the team, qualify for the Olympics and leave on the side the individual finals. Carlotta Ferlito will probably get to compete on all 4 apparatus, but she’s the only  almost sure to do the AA, while the other gymnasts will probably find it out the day before the qualifications. As for the event finals, entering the floor final  won’t be easy considering Erika’s injury and Vanessa’s tendon problem. The most likely to enter a final is Carlotta Ferlito on beam, who’s looking very confident.

**The “Surprise” ** I can say the surprise is watching Lara Mori, who broke her leg a few months ago, being back so early and with all the difficulty back. Considering Italy’s records, it looked almost impossible, but she’s here and with good prospects.

**The Rock **I would say Vanessa Ferrari, the captain of the team, will give enough confidence to the girls, and despite the recent problems, she will be able to deliver solid routines. Also Erika and Carlotta, two veterans, could drag the team with their maturity and experience.

The Best-Case-Scenario Finish  The best-case-scenario is Italy qualifying and earning the 5th place. If everyone does what they are capable of without errors or hesitation, they have a very good potential as a team. Let’s say that a medal chance is very unlikely barring a disaster from the other teams, but a error-free competition would be good enough.