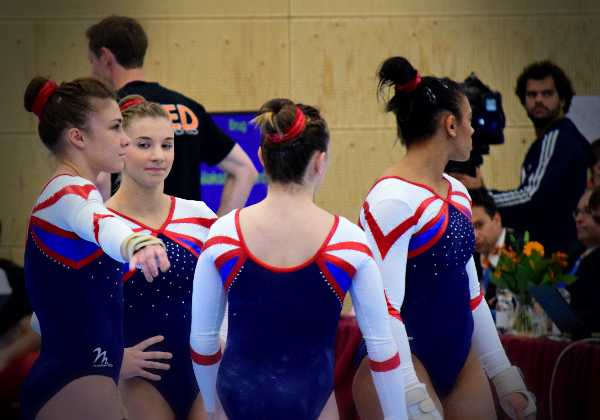 Great Britain is a team that has been on the rise in the last few years following their success at the London 2012 Olympics. This year the British gymnasts will be getting another opportunity to enjoy another home championship with perhaps their strongest team they’ve assembled to date…

The team consists of ones who have all experienced being on the biggest stage, Rebecca Downie, Claudia Fragapane Ruby Harrold and Kelly Simm who will all be returning to the Hydro Arena in Glasgow where they experienced great success at last year’s Commonwealth Games.

Then there are the fresh new rookies, Ellie Downie and Amy Tinkler who will be experiencing the world championships for the first time but have already made their mark on the senior international scene at this year’s European Championships and of course are coming off with outstanding junior careers under their belts.

The British have traditionally been known for producing great bars workers, where of course they’re still strong on. This team is perhaps more diverse than we’ve seen from the British in recent years, where they have a gymnast like Ellie Downie who has the difficulty and the consistency to be really good on all four events. The same would go for gymnasts like Amy Tinkler and Claudia Fragapane who all have their weak points but are fully capable of putting together decent scores on all four events.

Britain as already mentioned being known for their bar work, have kept this asset in this years team where they’ve included Rebecca Downie and Ruby Harrold, who both have made the uneven bars finals in the last two world championships (2013 – 2014) and both hold significant European, Commonwealth and World Cup titles on this event.

The British have famously struggled on beam in the past few years, and even though they’ve made vast improvements on the event, the beam still plagues them even today and could be the one event where they potentially could encounter some problems especially in a three up – three count format in the team final.

The Brits are also common victims to low E scores, as they may not showcase the cleanest gymnastics that we see from other nations. We often see little form breaks or too many tiny deductions that allow the judges to take tenths away. On the bright side, I have noticed that the girls have been working hard on execution over the years and have improved in this area.

A spot for the all-around will be tightly contested between Ellie Downie, Claudia Fragapane and Amy Tinkler. Kelly Simm and Ruby Harrold could also be put up in qualifying to contest for a spot but I suppose one of the two, or both, will end up being specialists.

Here is a list of their top all-around scores so far in 2015:

For individual finals it’s pretty straightforward, they have four girls who in the past have competed two vaults, those being Ellie Downie, Fragapane, Tinkler and Simm. Either one of them could make the vault final however I suppose only two will get to compete two vaults in the qualifications and I would put my bets on those being Ellie Downie and Claudia Fragapane.

Bars is an event where the British could pull off a medal in front of the home crowd. Becky Downie is capable of reaching the mid 15’s with her sets, in which she has many versions off, and Ruby Harrold is capable of a mid to high 14. I think Ellie Downie could sneak in above Harrold if given the chance.

Beam final will be tough to make for any of the British gymnasts, but if any were to make it the Downie sisters have been looking strong on beam recently and have routines difficult and executed well enough to potentially qualify a spot into the final.

Claudia Fragapane and Amy Tinkler are the best bets for a spot in the floor final. Both compete exceptionally difficult tumbles that rivals the best floor workers in the world.

Call me crazy, but I thoroughly believe Ellie Downie could be the “dark horse” of the all-around final. Having posted as high as a 57.750 this year and winning the bronze at the European championships this year, Ellie has room for improvement, and can potentially break the 58 mark which is a score that can challenge for a spot in the top 8 or even on the podium, which would be a first for a British women. The highest Britain has ever placed in the world all-around final is fourth with Beth Tweddle in 2005. Perhaps Ellie could place higher? We’ll soon find out.

The Hydro Arena has great memories of Claudia Fragapane winning four gold medals at the Commonwealth Games last year. She has been widely celebrated for that achievement in the British media and has won sporting awards recognising her success, including the BBC’s Young Sports Personality of the Year award.

With memories of those games still raw in Scotland, Claudia could end up feeling the weight on her shoulders therefore will take a crucial part in carrying the team for a spot in Rio and potential a spot on the podium in the team final (pending on the performance of other countries).

I have always and will always believe that the British women will one day finish on the podium in the team final. With tough competition coming from not only the top four but from Italy and potentially Brazil, getting onto the podium will be tough. I believe their best scenario finish would be either fourth or fifth place with the possibility of grabbing the bronze medal pending on the performances from other countries.