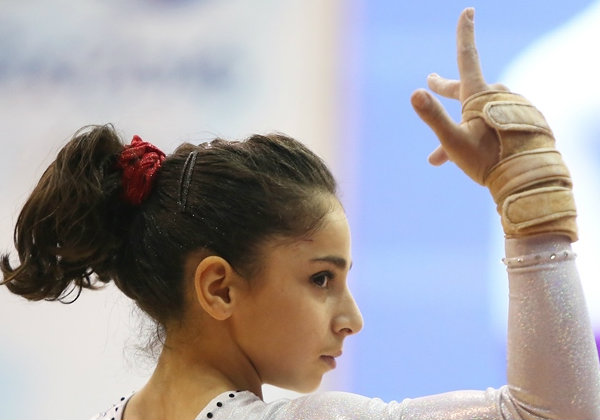 Russia has had considerable ups and downs since their victorious win at the 2010 World Championships and their emotional performance at the 2012 London Games. Last year was arguably their lowest in recent memory, but they still managed to climb the podium. Now, with the return of Olympic veteran’s Ksenia Afanasyeva, Maria Paseka, and the highly anticipated Viktoria Komova, this richly diverse team (in talent and in experience) is likely very anxious to show what they can do. They will no doubt appreciate the support of their leading lady (Mustafina will travel to Glasgow soon to cheer them on) but I imagine they’d also love to prove their capability out of her shadow.

Where they are strongest: Uneven Bars, even without the reigning Olympic Champ. This lineup will include 2014 European Bars Champion Daria Spiridonova and 2011 World Bars Champion Viktoria Komova. Neither delivered their goods at the most recent Russian Cup event final, but they are without a doubt among Russia’s best bar-workers when they hit. The third spot will likely go to Maria Paseka or Seda Thutkhalyan, and I personally hope they give it to Paseka if she looks strong in Glasgow. Thutkhalyan has improved dramatically on bars over the last couple of years and with her newly added element—a Bhardwaj—she breaks from the typical Russian composition and offers a bit of flavor, but she also has to fight pretty hard on this event and the team could use less stress on what should be their best rotation. In Paseka’s earliest senior years, she never got the call for bars in the company of Mustafina, Komova, and Grishina, but it’s still been a consistent event for her.  say it’s time to make her part of the original bar plan; She scored a 15.300 at the most recent Russian Cup.

** ****Where they are weakest: **Floor Exercise, though it shouldn’t be as rough this year as last. There’s been a lot of ink spilled on the music selection and lack of good choreography this Olympic cycle, so I won’t add any more other than to bemoan the general state of things; Russia has too much potential on this event to give what appears to be so little attention. And when I say “potential,” I don’t mean double-doubles, but rather performances that delight. They had those not so long ago and for a group of women who have incorporated dance into their gymnastics since they were kids, it should be a priority. However, even if they did delight it’s likely this event would be lacking compared to the rest. Their scoring potential is considerably higher with the return of Paseka and Afanasyeva, but the third spot is likely to be filled by someone who will have to count a score in the 13’s. Thutkhalyan or Kharenkova are likely to get the call and will likely perform admirably, but it won’t be the kind of contribution that a team fighting for a podium finish badly needs.

**Who could make the All Around or Event Finals: **Valentina Rodionenko has named Thutkhalyan, Kharenkova, and Spiridonova as those who will contend for the All-Around. Out of those three, I’d say the 2014 European silver medalist Maria Kharenkova is the one within striking distance of the podium if (and this is a very big “if”) she has a clean performance. What’s ironic about this possibility is that Maria could very well only be used on balance beam in the Team Final. (Floor is the other possibility.) She is an all-around gymnast, with arguably the highest all-around potential on this team, but only consistently places in the top three on one event. It would be very interesting, to say the least, if she were to contribute minimally to the Team effort but turn around to fight for an all-around f finish days later. This isn’t where the federations focus is this year, but it’s also not impossible.

On vault, Maria Paseka will be challenging for a medal with a much-improved Amanar and Cheng; on uneven bars, Viktoria Komova and Daria Spiridonova will be challenging with similarly beautiful routines (much will depend on their game-day nerves); on balance beam, it’s difficult to tell, as always, but it’s conceivable that Maria Kharenkova, Ksenia Afanasyeva, Viktoria Komova or Seda Thutkalyan could make the Final; and on floor, it’s conceivable that Ksenia Afanasyeva could make the Final.

The “Surprise”: Despite the constantly changing story in regards to Mustafina’s participation and a series of “mini surprises” that kept us on our toes, I’m not ultimately surprised by anyone’s placement on this team. The only real surprise came when Anastasia Dmitrieva was named alternate ahead of Evgenia Shelgunova a couple of weeks ago (which, of course, has changed since then). Consistently finishing in fourth place at the 2015 Russian Cup, she is competitive with her teammates and can conceivably break into the 14’s on the three events she might be called on (everything but uneven bars).

The Rock: In the absence of an all-around gymnast who scores in the top-3 on every event, naming “the rock” is a bit harder. Who will feel the weight of the team on her shoulders? Valentina Rodionenko has named two-time Olympian Ksenia Afanasyeva as team captain, but with her health in question (apparently she’s suffering from kidney stones), I imagine Maria Paseka will also feel a great deal of responsibility. Like Afanaseyva, she has the potential to offer three big scores, one of which (vault) could give the team a big boost if she hits it cleanly. I think it’s delightful that she’s in this position. Long considered a specialist and a somewhat untraditional Russian gymnast, she has a knack for surprising audiences and even her coaches. (I’m thinking back to Coach Grebyonkin’s face when she nabbed the bronze medal on bars at the 2013 European Championships.) She’s certainly more than the “vault girl” this year. It will be interesting to see how she handles it.

The Best-Case-Scenario Finish: Silver, if every member does what she’s capable of. You’d think that in the absence of Mustafina the best they could hope for is another bronze medal, and her absence will certainly hurt. But it’s also less likely that they’ll count scores in the 12’s this year unless someone has a total meltdown. They might not have a quintessential all-arounder, but they have a solid team of six specialists. Let’s hope the excitement of a real crowd is helpful and that the Russian Cup mess-ups were left in Penza.