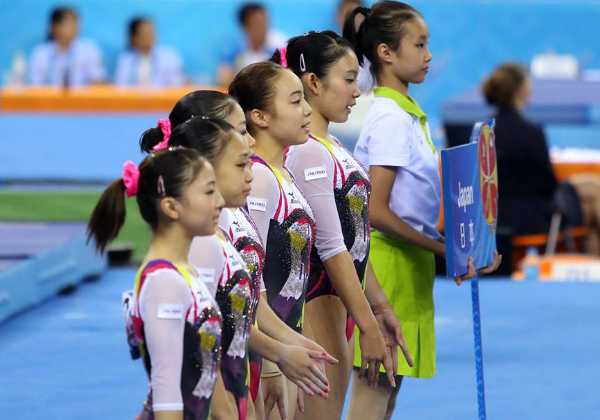 Japan’s WAG program may be less successful compared to their MAG one. But the girls are certainly not without merit, having qualified to the team final every year since 2008. Their Rhythmic Gymnastics group just won a historical team bronze at world championships last month. Will this be the year the WAG team also makes it? The girls are certainly motivated. Team veteran Teramoto, who hasn’t been absent from international comp even since she started senior career, is determined to lead team Japan to get the ticket to Rio Olympics.

Where they are strongest

As usual, team Japan are quite strong on beam with 5 girls’ ideal start value above 6.0 difficulty score.

Without Tsurumi, their UB lineup seems a bit weaker than usual. Still, three gymnasts will have a start value around 6. The most remarkable will be Uchiyama, who may throw a 6.4 UB set if her Shapo 1/2 is ready.

However, their fourth UB scorer, Sasada, has been dealing with  thumb fracture and wrist pain. We are not ruling out another disaster like she did in Asian Championships. That’s one of the biggest weak point for them at the moment.

What are the weak spots

Consistency might be their biggest challenge this year as the days when they used to have weaker rotations on certain apparatuses might be behind:

Team Japan usually is weaker on VT and FX but this time with powerful tumbler Sae Miyakawa in the mix, the situation is not as worrying as in the years before. Sugihara’s potential DTY (depends on if her knee pain is still bothering her) and Teramoto’s Rudi, make their VT lineup quite amazing.

Miyakawa will have a crazy floor routine; but the other girls actually aren’t that bad either especially they all have lovely and unique choreography. Their average FX difficulty score was 5.7 at the Asian Championships, which is not bad at all.

Who could make the All Around or Event Finals

The two who make it into the AA final could be Asian Champ AA medalist Aiko Sugihara and Asuka Teramoto. Sugihara’s total at Asian Championships – a 58.05- puts her in a nice position for an all around placement. Teramoto, with her 57,75 at Asian Champs, also has a potential for a placement in top 8.

But Yuki Uchiyama was just few tenths behind Teramoto at Asian Championships so the race between the two could be a tight one in qualifications. However, we don’t know how much the knee pain will affect Sugihara plus, Teramoto is a season competitor, and Asian Championships is not the same as a World Championship, so don’t rule Teramoto out.

Ideally Sakura Yumoto’s 6.4 beam routine should be her best bet for the qualifications to the event final. Beam, however, is always the hardest event to predict. Plus, Yumoto twitsted her ankle in late summer and we don’t know her health status yet. Teramoto qualified to EF last year with just 5.8D. I think Yumoto, Sasada, Teramoto and even Sugihara all have chance to make EF. ( And in the right condition, how could Sasada NOT make EF with the performance she did in Universiade TF and AA final?)

I would say Miyakawa has a high chance to make VT EF but not really sure about FX. Her steadier routine is valued “just” at a 6.2D. This is not a guaranteed ticket to the final, especially since her choreography is not as lovely as her teammates. It also seems she can’t really control her power and nerves in competition (that may be the reason she fell at the Japanese event finals and Asian Champs event final).

More upgrades. At the Asian Championships we saw many upgrades and construction change from the girls. New senior Sugihara threw a DTY vault, added  0.2 in difficulty on UB, presented the potential for a 6.5D beam routine, and a 5.9 floor (with all dance skills credited). Our 20-year-old veteran, Teramoto, also regained her triple twist dismount which had been downgraded twice by the judges, at worlds last year. She also changed part of the construction of her beam, making her attempted difficulty a 6.0. And I think some of the girls might still have some upgrades ready. I expect  D/E rated dance skills from Uchiyama and Sugihara on floor, or a harder vault/even cleaner execution from Miyakawa. I expect upgrades from Uchiyama if she wants to make the AA final.

Definitely Asuka Teramoto looks to be the most reliable. With four teammates about to make their debut at world championships, her experience of competing three times already at Worlds will sure help the other girls. And let’s not forget that she has only had one fall previously so she definitely knows how to compete.

If all girls will do their job, top five placement in the team competition is a sure thing. Let’s wish them luck!