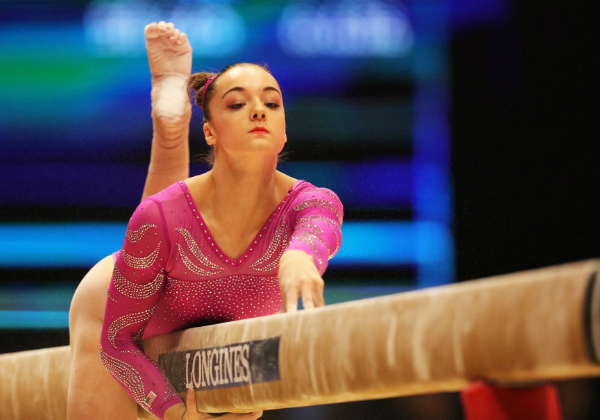 As I was writing this, US team had just finished one of their more challenging meets since that infamous team final in 2010 (when Russia won the title).

USA just had four falls in the prelims at Worlds but they are currently leading qualifications by five points and they are not in danger of losing their supremacy in the team final. The outrage over what is being characerized as an unexpected performance shows how consistent they have been over the past years.

Gabby Douglas opened with a floor routine that set the  room for the team with amazing tumbling, especially her first two passes, a double Arabian to split leap and a full in to stag (14.4/5.9).

Things started to get weird shortly after the meet started. Brenna Dowel, up next. Her music was mixed up and she wanted to start over, so she went on the side. Then she came back and she was on the start pose waiting for her music, when the timer started. So she suddenly went to the corner to start her routine, only THERE WAS NO MUSIC. Everyone was in tears throughout the routine (poor Brenna) but eventually everything went well, she hit her passes, including a double front piked that she was aiming  to introduce into the code of points and have it named after her.

Maggie Nichols, was up next, she had a beautiful routine, sticking her passes and nailing her leap positions (14.700/6.2). Aly Raisman, 4th competitor, had a little bit too much adrenaline going and went oob with both feet on the double Arabian pike to leap and received a 14.533/6.2, a good score but she was finding herself 2nd to Nichols, with Biles still to go on the event. Simone had an almost perfect routine, with massive tumbling, both in height and in difficulty: full in stretched, Biles, double-double, full in, for a 15.966/6.9.

Vault, as tame as it seems usually, was not uneventful either: Simone sat her Amanar in warm-up and she made us all fear for her (she hit it cold when it counted and got a 16 after all). Other occurrences were Aly’s relatively low scoring Amanar (15.133 after two big steps) and by contrast Gabby’s superb DTY for a 15.3. The fight for the AA spot between the two was getting more and more interesting.

Aly opened the bars rotation and she was not mentally ready after the disappointing previous rotations and she fell on a Tkachev, to get a 13.066/5.6. Gabby went up right after and hit her routine while the gap between the two was getting impossible to surpass (14.750/6.2 for Douglas). Then Simone did her job wonderfully for a 14.666. Madison Kocian, one of two US event specialists aiming for a big routine to qualify for the final,  was up next and she also hit and received a 15.233 for a routine out of 6.6 which put her in 3rd place on the event after two Russians.

Then Brenna Dowell started, with perhaps one of the most ambitious routine compositions in Glasgow, certainly the most intricate and original bars routine. But as soon as she missed connecting her Tweddle we knew this was not going to be the magical day when it all came together. Brenna tried to save the routine, changed the composition, repeated skills just to make sure she gets the connections. But unfortunately she still went off twice. This had been her chance to show this routine in a major international competition and it was devastating for her not to make it through. She was well aware that this moment was extremely important and it ended up a missed opportunity. (11.333/5.9).

Madison Kocian opened beam with a solid 14.0, doing exactly was was required of her. Gabby Douglas had a shaky start with a pike front, then her connection of flick to layout stepout was good, but the next element, standing back full, was landed completely of the beam, her entire sole was off (13.066/5.9). Nichols hit her set for a 14.166 (8.33).

Aly Raisman, was not her usual secure self, and understandably after the rough previous events, was too cautious in all her elements. She stayed on but her final score was severely affected – 14.066/5.8.

Simone Biles up next did the best Barani of her life (in competition) right at the start of the routine and pretty much set the record straight on whether she was going to let herself influenced by the previous executions of her team mates. Simone was fine. She made it into the beam event final, from the first qualifying spot (14.9/6.3), in addition to that, she qualified for floor (top score by more than a point) and vault (outscored Paseka, 1st qualifying score here too). And of course the all around with a total of 61.598. Joining her in the all around competition will be Gabby Douglas (57.516).  Gabby will likely be the 2nd American to compete in the bars final (with Kocian).Maggie Nichols will also likely qualify for the floor final.

The Netherlands were the shocker of the day, in a brilliant way. I had seen them competing against GB on home turf a couple of weeks ago. It was not a good competition for them, with lots of mistakes on bars and beam and not the cleanest floor routines for them. But today it was like they managed to fix each and every minor issue and managed to deliver one (almost) perfect performance from start until the end. On bars they had 5 hit routines, with over 8.0 execution scores across the board. On beam Mara Tittarsolej faltered, while Lisa top was heavily deducted but the two Wevers sisters and Eythora Thirsdottir more than made up for the lost points with three 14+ routines (they gathered the 2nd event total after the US). Floor was, as expected, a joy for the eyes and they were rewarded with some of the best execution scores. Lieke Wevers did not put a step wrong in her routine and received a 14.2/5.6. In all fairness she has less opportunities with just two passes. It is also true that not everyone has her dance skills and artistry either.

After five hit vaults (three FTYs, a Tsuk full and a font handspring full) the Netherlands managed to sneak into the 8th place, overtaking Brazil. Besides the team final, Sanne’s certain beam final (she was second after Simone at the end of the rotation), Eythora was also in a qualifying position for the beam final. While Lieke’s total of 56.733 will secure her place in the all around, Eythora was also in a position to qualify at the end of the session but towards the lower part of the ranks (55.14 was her total).

Here are the intermediate all around and team qualification results:

Here are some pictures:

Previous Dutchies through the front door to RIO!
Next 2015 Worlds: Results & Pictures after Subdiv 7