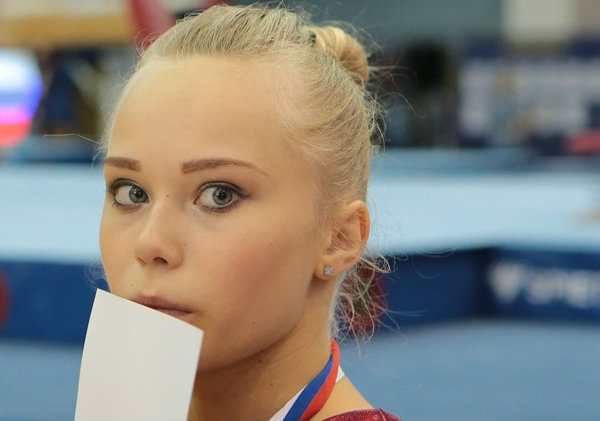 The Russian Cup began in Penza today with two qualification divisions ahead of Thursday’s All Around Final and Saturday and Sunday’s Event Finals.

Though not an Olympic Trials per se, the meet is the last competitive opportunity for gymnasts to prove themselves ahead of the final selection. Heading into today’s qualifications, Valentina Rodionenko made it clear that following the recent withdrawal of Viktoria Komova from an Olympic bid, the favored team is one led by All-Arounder’s Aliya Mustafina and Angelina Melnikova, and rounded out by specialists Ksenia Afanasyeva, Maria Paseka, and Daria Spiridonova.

Given the precarious physical conditions of veterans Afanasyeva and Paseka, however, some urgent questions surrounded their possible replacements, perhaps more among fans seeing their Instagram photos than among Rodionenko herself.

We knew Seda Tutkhalyan would need to be on top of her game at this meet, as she would be the most obvious choice for Rio in the absence of Afanasyeva. (This is my opinion at least, and for the record, I actually think Tutkhalyan is worth the gamble and should remain part of the conversation regardless of whether the veterans prove their readiness in time, and especially if Afanasyeva isn’t able to recover floor exercise. With the aforementioned team, they are short one dynamic beamer and floor workers, and Tutkhalyan could contribute in both places in addition to offering a DTY vault. Yes, her high-stakes competitive record is inconsistent, but there’s also the possibility of a big return on the investment if she hits.)

In addition to Tutkhalyan, the other gymnasts heading into this meet wide-eyed were Natalya Kapitonova and Evgenia Shelgunova, both named as alternates in addition to Tutkhalyan. The former’s potential scores on uneven bars and floor exercise could prove tempting given the team’s need for a spectacular bars rotation and improved floor rotation. I imagine her selection would mean World Champion Daria Spiridonova would stay home. And the latter’s ability to plug in anywhere could prove tempting especially in a situation where two out of the three veterans aren’t ready in time.

After today’s messy competition, some of those questions are on their way to being settled, while many others remain. Ksenia Afanasyeva didn’t compete, as she is still healing from a recent procedure on her foot; Aliya Mustafina had a surprisingly lackluster performance, posting  her lowest score–a 12.125–on bars after coming off following her pak salto and before her Van Leeuwen, and then falling on the Van Leeuwen once she attempted it again; Tatiana Nabieva placed fourth and just ahead of Mustafina all-around, and  Daria Spiridonova performed masterfully on bars (a 15.425) but scored a 12.250 on her only other event, balance beam. Kapitonova posted a 14.425 on bars and a 13.550 on floor exercise.

On the somewhat brighter side, Angelina Melnikova leads all-around qualifications, followed closely by Seda Tutkhalyan (57.625 and 57.075). Neither posted massive scores, but they were the only competitors to post three scores in the 14’s today, and that’s got to say something, even with domestic inflation. (I also believe Tutkhalyan fell on her beam dismount, posting a 14.125 nevertheless.)

On their heels was the consistent Evgenia Shelgunova, posting a total score a 56.050 for a 14.825 vault and routines in the high 13’s on the rest of the events.

But let’s not panic, I say. It’s qualifications and it’s Russia. The All Around Final will be held tomorrow. Stay tuned.