Russian Cup: All Around Final 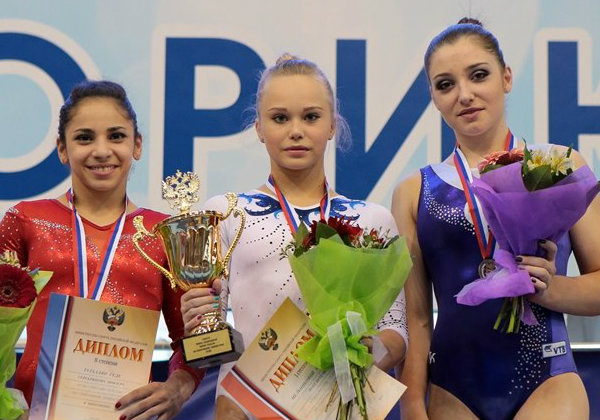 Today’s All-Around Final in Penza was neither totally redemptive nor just the same as yesterday’s sloppy qualifications. Some of the participants improved on the first day’s inconsistencies, while others continued to struggle.

First-year senior Angelina Melnikova won the title with four hit routines, earning a total score of 59.525. She earned a 15.050 on a big DTY vault, 14.975 on bars with a Maloney to pak; van leeuwen, piked jaeger and full twisting double dismount; a 14.625 on beam, and 14.875 on floor exercise. She should be well on her way to growing in confidence and shedding any doubts about her consistency that linger from her junior career. If you consider this competitive season only, she will be Russia’s most consistent All-Arounder heading into Rio.

Earning silver was Seda Tutkhalyan, who also went four for four today, earning a total score of 59.125. On beam, she wisely swapped her full-twisting dismount for a double pike, and that may have given her the breathing room she needed to hit the rest of a difficult routine. She was solid on her round-off to layout and her layout full, posting a 15.100, one of the few scores that reached into the 15’s today. A nice showing on floor (DLO stuck; whip + whip + double pike; 2.5 to 1.5 twist; double tuck with a little hop back), a passable DTY, and a packed and hit UB routine (beginning with a toe-on piked tkatchev to pak to Bhardwaj) should have done a lot for her Rio cause.

Earning bronze was Aliya Mustafina, who continues to look a bit rough at this competition despite a good showing at the European Championships just last month. She finished with a total score of 57.9 after relatively good but not great beam (14.325) and floor routines (14.300), though the full-in first pass on the latter still looks promising. On vault, she performed a solid-enough DTY (14.875) but then had another meltdown on her best event—bars–this time falling on her full pirouette near the end of the routine. When she attempted the toe-on full after remounting, it was uncharacteristically fast and not atop the bar. Some observers shared that her wrist looked like it was bothering her, so I suppose we can only hope if that’s the case that it’s only a minor problem and won’t hamper her training. A couple of lackluster days at the Russian Cup aren’t going to damage her Olympic bid or even her confidence, but another nagging injury isn’t what she needs right now.

UPDATE: According to Mustafina’s fan group on VK, she told reporters following the competition that her trouble on bars is due to new equipment, the kind that will be used in Rio. She hasn’t adjusted to it yet, having only used it for two weeks now, but stresses that there’s still time.

Coming in fourth and fifth were Evgenia Shelgunova and Natalya Kapitonova, both of whom Valentina Rodionenko has named as possible replacements for the team she currently favors (Mustafina, Melnikova, Afanasyeva, Paseka, and Spiridonova).

Shelgunova was her usual consummate all-arounder self, posting scores in the high-13’s to mid-14’s with ambitious work hampered by low execution scores. (I love her free cartwheel to LOSO to LOSO series on beam; it’s a bit messy but it’s brave.)

For her part, Kapitonova posted the competition high of 15.350 for her uneven bars routine. Despite her potential for beautiful work on this apparatus, however, she is still inconsistent, and with a floor routine that scored a 13.025 today, an event Russia would need her on, I still have a hard time imagining she’s really chasing Daria Spiridonova for a trip to Rio. Although Spiridonova struggled again on balance beam today (performing more or less as an exhibition), she hit her uneven bars routine. She hasn’t yet made the case that she can be used anywhere but this event in the Team Final, but she is Event Final worthy, and after Mustafina’s performances on bars thus far, that may be a consideration receiving extra weight at present.

Event Finals are scheduled for Saturday and Sunday, where we’ll get another look at Paseka and Spiridonova, see if Mustafina turns it up a notch, and hope for Tutkhalyan and Melnikova to build on what they’ve accomplished today.