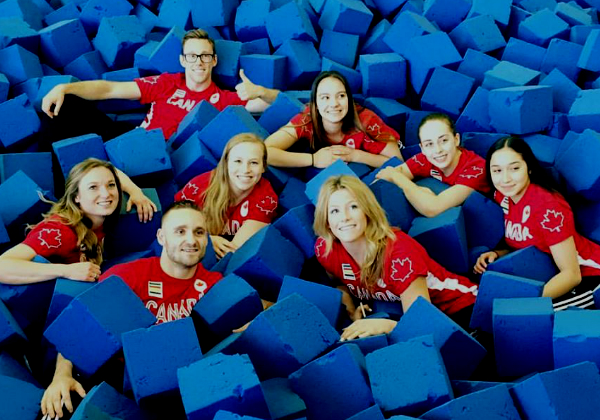 Canada’s selection camp took place in Gatineau, starting on the 27th of June. There were two all around competitions. After Wednesday’s competition, the committee announced the first three members:

Brittany Rogers won the all around competition in the second day, with a total of 57.084. She finished with her best event uneven bars and burst into tears knowing that a successful routine had secured her qualification. Here is Brittay’s routine followed by the emotional moment of victory:

Rogers said after the competition “I had so many emotions bottled up and after I finished that bars routine, it just all came out. I knew as soon as I landed that bar routine that I had a really good shot at making my second Olympics and that’s a dream come true. It’s not very common for someone from NCAA gymnastics to five weeks later make an Olympic team, so that in itself is an accomplishment and my ultimate goal so I’m very proud of myself,” .

Two more athletes were named on Thursday: Rose-Kaying Woo and Shallon Olsen. They were second and third all around after the second day of trials with total scores of 55.934 (Woo) and 55.350 (Olsen).

Rose-Kaying Woo (16) she has been one of the up and coming Canadians for years now, having competed in the previous years and the Pac Rims, Gymnix, Elite Gym Massilia, Jesolo etc.  Woo has the potential of scoring well on beam and uneven bars.

Olsen has also been noticed by fans and specialists years ago, her great power in contrast with the apparently frail physique setting her apart. She still has a strong vault and a 6.1 difficulty on floor.

The team announcement was hosted by Kyle Shewfelt and live streamed .

Here are the full results: