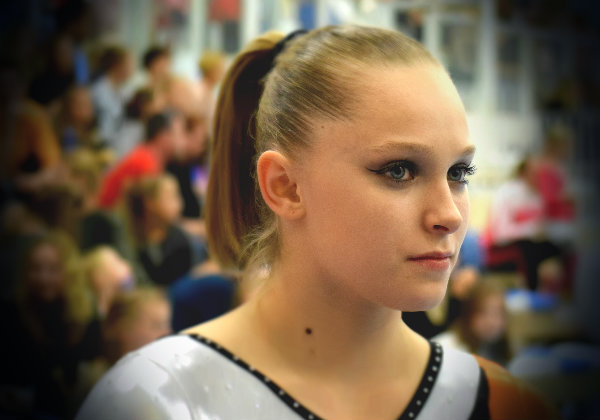 Noel van Klaveren from The Netherlands has decided to end her competitive career following an ankle injury, The Hard Way to Success announced yesterday.

The injury happened last spring during the European Championships and it affected her ability to compete at the Dutch Nationals and Olympic qualifiers this summer cutting short her dream to compete in Rio. ” It was a difficult decision, especially because gymnastics is still a lot of fun. The pain in my ankle is chronic, making it no longer possible to charge it optimally” said Noel.

At the 2013 European Championships, Noel won a silver medal in the vault final, foreshadowing the success of the Dutch team this quad. She burst into the European scene making a name for herself as a clan strong vaulter, throwing a double twisting Yurchenko and a Tsukahara full. Her vaults, although not the most difficult, were clean and showed a lot of potential for the future.

At the 2013 Worlds, Noel qualified for the all around final, placing 20th. During the qualifications she missed out on a spot for the finals placing 14th of vault and 11th on floor.

During 2014, Noel did not compete in major meets due to family issues but she returned in good shape in the spring of 2015 placing 3rd on vault at the Ljubljana World Cup and 4th at Euros. Next autumn, despite showing optimal shape on her favorite events, vault and floor, she was not selected for the 2015 World Championships as her strengths were overshadowed by those of her other team mates.

During her brief but dramatic career, Noel knew individual success and made a lasting impression through her speed, power and clean execution. Frequent breaks and injuries, however,did not allow her to achieve Olympic success.

An now, let’s watch some of her gymnastics:

Worlds Qualifications – September 2013, upgraded her second vault to a Tsuk 1 1/2:

Massilia – November 2014 – Noel comes back with a successful floor routine (and the trademark DLO opening pass):

Struggling to improve on her weaker events in her bid for an Olympic spot, Noel has moments of brilliance despite facing major challenges: