Russian Championships: All Around Final 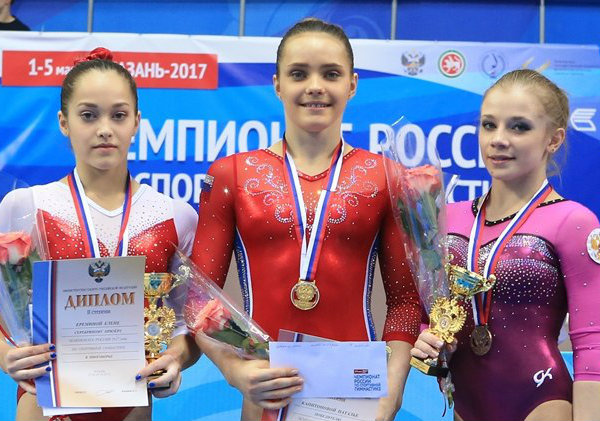 The Russian National Championships continued on Thursday in Kazan with the All-Around Final. Heading into the meet, first-year senior Elena Eremina was leading, followed by 2016 Olympian Seda Tutkhalyan and Olympic Alternate, Natalia Kapitonova.

Following tradition, however, this meet turned into a bit of a splat-fest, and the qualifcation standings didn’t hold even with scores carried over from the first day. The skills were there, but the concentration, endurance, practice, whatever it is, was lacking.

Second-year senior Natalia Kapitonova capitalized on the mistakes of her teammates, performing solidly across all four events for a total score of 54.799/108.231 combined. She improved on her day one performance especially on balance beam, where she posted a 13.700 (vs. a 12.466 the first day) after completing a solid BHS X 2 to layout, a cool split jump to front tuck, a double turn with held up, and a stuck RO to BHS to double tuck dismount. Her highest score, however, came on uneven bars where a clean routine stood out in an uncharacteristically messy rotation. She began with a stalder full, completed good shaposh transitions (Komova II and Van Leeuwen) and an inbar full, and ended with a full-twisting double back dismount for a 14.333. There were some visible form errors (legs slightly apart on pak and pirouettes were the most noticeable) but good rhythm and a routine without any major errors went a long way today.

Following Kapitonova was first-year senior Elena Eremina, who wasn’t able to match her qualifications performance for the title after poor performances on bars and beam, but was able to stave off Shelgunova’s challenge for silver with the competition’s highest score on floor exercise, a 13.800, opening with a full-in and dismounting with a slightly messy but complete triple twist. Her all-around total was a 52.366/107.732 combined.

Evgenia Shelgunova, who had much more consistent scores across the events, placed third with a total score of 53.852/106.567 combined. Her most delightful performance (and highest score, a 13.866 ) came on balance beam, where she completed a solid RO to layout, punch front, front aerial to sheep jump, switch leap, and RO to double pike dismount. It wasn’t the most exciting routine we’ve seen her perform, but it was confident. A good start for what will hopefully be a more satisfying year for her.

After multiple falls, Olympians Seda Tutkhalyan, Daria Spiridonova, and Angelina Melnikova placed fourth, seventh, and eleventh, looking far less seasoned than they are. They will certainly be looking for improved performances on their respective specialty events in the days to come.