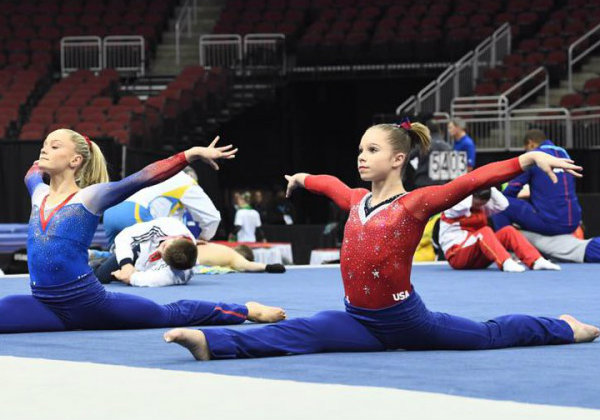 2016 Olympic Alternate Ragan Smith, coached by the legendary Kim Zmeskal-Burdette at Texas Dreams, won the title as expected with a total score of 56.099. Her only hiccup came on balance beam, usually her best event, where she fell on her standing full after a solid double wolf turn, switch half, and BHS to layout. She scored a 13.266, the only sub-14 score of her meet. On vault, she performed a clean DTY, one of only two in the competition; and on bars, she showed improvement relative to last season, beginning with a toe-on full and in-bar half to Jaegar. A stalder full, stalder-Tkatchev, Pak, Ray back up to the high bar, and stuck full-twisting dismount earned a 14.400. She wrapped up her meet with a bouncy floor routine, opening with a lovely DLO, followed by a 1.5 to triple twist, slightly messy double Arabian, and slightly under-rotated double pike. A 14.000 easily hung on to the lead and added a coveted title to her trophy case.

Her USA teammate, Riley McCuster (MG Elite), had a much rougher meet, placing fifth overall with a total score of 52.966 after a messy DTY, a fall on her stalder to Tkatchev and form break on her pak, and a particularly scary fall on her beam dismount. (She missed her foot on the BHS that should have propelled her into a double pike.)

There were moments of positivity amidst all the nervous blunders, however. Following the fall on bars, she remounted to repeat the combo, and she began the routine with a solid stalder full to Maloney to Tkatchev. She also counted a good series on beam—a BHS to LOSO to LOSO. And on floor exercise, after some wondered aloud whether she should scratch, she came back very strong, certainly determined to leave a better final impression. A solid full-in, double twist to front tuck, stuck double pike and double tuck was a great finish to a difficult competition. This was clearly a tall order for the first-year senior with very little elite experience, but it needn’t be a career-definer.

In the absence of Biles-esque dominance from the Americans, the spotlight was free to travel a bit, which is atypical in a meet that has historically been dominated by the USA, early as it comes in the season. Two-time Olympian Asuka Teramoto of Japan earned a well-deserved second-place finish after performing calmly and consistently across all four events. She began with a Rudi on vault (13.766), performed an inside full to Geinger, stalder half to piked Jaegar, and an almost stuck full-twisting dismount on bars for a 13.766, and on balance beam she gave one of the better performances in a messy rotation, beginning with a double turn, completing a BHS X 2 to LOSO, switch half, Onodi, and RO to 2.5 twist dismount for a 13.633. She finished her meet with a beautifully classic floor routine, opening with a triple full and closing with a double pike. It’s arguable that in terms of performing-to-expectation, this was her meet.

Filling out the top-three was France’s Melanie De Jesus dos Santos, a second-year senior and reigning beam gold medalist at the Elite Gym Massilia. Climbing back after a FTY vault that left her in seventh place following the first rotation, her stand-out performance of the day came on balance beam, where she posted the only 14 + score of the rotation (a 14.233) with a beautifully unique routine: front tuck mount, pike front, handstand to BHS to layout, front aerial, jump in attitude, and RO to stuck double pike dismount. Along with relatively clean uneven bars and floor routines, she was able to clench that third spot.

Coming in fourth was Germany’s Kim Bui, who gave her best performance on bars with a routine that earned a 14.533. (Piked jaegar to pak, Maloney to Bhardwaj, Van Leeuwen, rushed toe-on full to geinger, full-twisting double pack dismount.) If not for a big bobble on a full-turn jump in an otherwise cool and confident balance beam routine, she may have made more of a challenge for the podium. Alas, it wasn’t to happen today.

Following McCuster’s frustrating fifth place finish was Yufen Xie of China in sixth, Tisha Volleman of The Netherlands in seventh, and Emily Whitehead of Australia in eighth.

Xie began her competition with a rough first rotation, not getting a great block on her FTY vault and landing with her chest pretty low, but she came back in the second rotation to execute a pretty good bar routine with a Maloney, pak, Van Leeuwen, and Tkachev. She didn’t show the easy swing and rhythm so characteristic of the Chinese routines, but she did showcase some nice pirouetting. A 13.833 on the event would be her high score of the competition.

In contrast to Xie, Volleman completed a very nice FTY to begin her meet, but struggled more in the second rotation where she had a big arch coming out of her pak before succumbing to it and counting a fall. She also struggled on floor, where an artistic routine was overshadowed by sitting down her second pass. Her balance beam routine was a thing of a beauty, beginning with a full turn with leg held up into immediate double turn (channeling teammate Sanne Wevers, no doubt), but it’s low start value meant a relatively low overall score—a 12.200.

As for Whitehead, the first two rotations went much better than the last two, where lack of steam may have been an issue. After a completing a clean FTY, she went on to bars where she completed a toe-on-full, Maloney, pak, Van Leeuwen, Markelov, and double front dismount. There were some form breaks here and there but overall it was a good performance.

Coming in ninth place was Great Britain’s Amy Tinkler, who scratched floor exercise after a disappointing mistake (a fall on her standing full) in her beam routine. Despite coming in last, it was nevertheless a pretty good season opener for the 2016 Olympic bronze medalist. She completed a great FTY to begin, a solid uneven bars routine with a Tkatvhev to pak, Van Leeuwen, Markalov, and full-twisting double back dismount; and until the fall on her standing full, beam was also going well with a cool gainer LOSO to immediate LOSO. If anyone were going to scratch that last rotation, I wouldn’t have guessed she’d be the one, but I imagine she has good reasons.

All in all, this competition wasn’t the strongest, but for a meet so early in the post-Olympic year, that’s somewhat to be expected. All of the programs are re-grouping, including the USA’s. Pacing is key; there’s no need to rush.

Previous Ana Porgras: “Yes, if I could change anything I would.”
Next Russian Championships: All Around Final