Ana Porgras: “Yes, if I could change anything I would.” 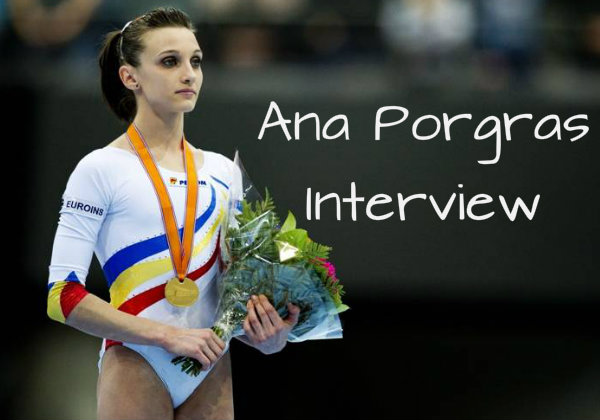 Gymnasts more universally loved than Ana Porgras are rare. She defined the 2009-2012 quad, instantly becoming a fan-favorite. She won a bronze medal on bars at the 2009 Worlds, her first major senior competition, but the impact of her debut was disproportionate with that one medal. This happened despite the fact that her performance at the competition was surrounded by some disappointments after the promising 2nd place all around qualifying position and the 1st beam final qualifying position didn’t materialize into medals. Her style and elegance were unforgettable and her fanbase grew with the next couple of international competitions and a 2010 European championships cut short by an ankle injury. Stronger and more confident in her beam routine and her all around abilities, Ana had an almost perfect 2010 Worlds (in Rotterdam) and she won the gold medal in the beam final.

But the success would be short-lived: injuries and a failed 2011 European Championship followed. At Worlds in Tokyo, Ana  looked technically ready, yet she was not able to achieve similar results to the previous year. She made mistakes in qualifications and missed the beam final. Coming out of 2011 Ana Porgras was still Romania’s top beam and bars worker (with a very important routine for the team) and their best all around gymnast of the quad up to that point (Larisa Iordache was just turning senior). It was hard to envision a Romanian team without her. In mid-January 2012, seven months before the Olympics, Ana announced her retirement from gymnastics.  The exact reasons were not explained at the time but it was clear that both Ana and the Romanian Gymnastics Federation officials struggled with accepting the new reality.”Physically I felt I could not continue, after so many injuries, it was hard to start from the beginning. I could not go forward,” explained Ana at the time.

Five years after her retirement, Ana agreed to talk to Emma Bailey (on behalf of TCG) about her story and the painful break from gymnastics.

Emma Bailey: We would like all the gym fans to know exactly what happened to you, as you were so loved as a gymnast by many, this is your opportunity to tell your story. The story will go on the Couch Gymnast website and social media.

What do you do now? Are you still involved in gymnastics?

Ana Porgras: Now I’m fine, I am peaceful in my life. I am no longer involved in gymnastics, I gave up everything when I retired. I am now trying to enter the fitness world.

Emma Bailey: Do you still see any of your former teammates?

Ana Porgras: Yes, I have seen them. Right now I am writing from the place where I started gymnastics, Galati. I have been to Izvorani but very rarely.

Emma Bailey:  What was your favourite skill/apparatus?

Ana Porgras:  My favorite apparatus was beam. But it’s hard to name a favorite skill, I think everything the routine was composed of was a favorite of mine, I used to enjoy doing it all and I was always eager to learn more.

**Emma Bailey:  **Where do you keep your World medals? Do you ever look at them and feel proud of your achievements?

Ana Porgras: All my medals at are my house, I keep them with pride. And yes, I am very proud when I look at them as they remind me of the moments when I earned them.

Emma Bailey: Did you ever think that when you were younger that you would be so successful in gymnastics or was your talent a surprise?

Ana Porgras: When I was little, no, I didn’t think of that, I thought it was just a game. But over time, when I saw I was evolving I didn’t think (it was possible), but I hoped that someday I’ll be a successful gymnast.

Emma Bailey: Everything seemed so perfect for you. You had a world title (the first for Romania since Andreea Raducan) and were heading for an Olympic place in London. What happened that lead to you ending your career so suddenly just before the Olympics? (There have been several rumors injuries, lack of motivation, issues with the coaches).

Ana Porgras: This is a hard question for me. I thought everything was perfect as well, until a point when I got injured and things changed. I injured my elbow and my knee at the same time. It was an unexpected moment for me, I wouldn’t have wished this to ever happen to me, this stopped me from training for the Olympics. However, when I started training again, my knee was OK but my elbow was not recovered completely so I could not train (properly). Now that I stop and think about it, I believe that with the injuries, it was also the psychological pressure that made me give up. But believe nothing is random and it was meant to be.

Emma Bailey:  Looking back now, would you change anything?

Ana Porgras: Yes, if I could change anything I would. Back then I had the mind of a child and if I could turn back time andthink like I do now, it would be perfect. For sure I would be much stronger and more determined. But since we can’t turn back we live with the nice memories of the past, but we live in the present.

Emma Bailey: Did you achieve as much as you wanted in gymnastics?

**Ana Porgras: **If you asked me after I retired I would have said yes, I obtained everything I wanted, but now I will say no. Now I think differently and I believe no career of an athlete is full without an olympic medal.

Emma Bailey: Did you have a period of loss when you ended gymnastics or did you feel free? Many gymnasts say that when they quit it feels like someone died.

**Ana Porgras: **Yes, there was the beginning when everything seemed perfect, I was free I could do what I wanted, I was happy. But after the period of “absolute bliss” I had a period of sadness when I thought that I hadn’t shown everything I could.

Emma Bailey: You have changed your look significantly since you finished gymnastics, is this the real Ana? You seemed so shy as a gymnast and now so bold.

**Ana Porgras: **I’ve changed, and I’m very happy with how I look. I can say I’m still that shy girl, only that life teaches you to be more bold. And yes I can say that this is the real Ana, although I’ve changed physically. Inside of me I am the same girl, less shy compared to (how I was) then, but I am still Ana.❤️

Emma Bailey:  Did you feel confined in gymnastics? E.g. like you had no freedom for self-expression?

**Ana Porgras:  **Yes unfortunately I felt confined. The discipline and the regimen there and did not allow us to express ourselves freely. Even though I was a child still remember this.

Emma Bailey: What advice would you give yourself if you did gymnastics again?

Ana Porgras: I would hive myself a very important advice, namely: to be stronger and not to care that much about absolutely everything that is going on, to be less sensitive because I was a hyper-sensitive child. Probably if I weren’t that sensitive I would have manged to overcome it all and I would have been able to speak as an Olympic champion now.

And in conclusion I want to say I am very happy that I had the opportunity to do gymnastics and be one of the champions of Romania. And are very proud to have represented Romania at World Championship.