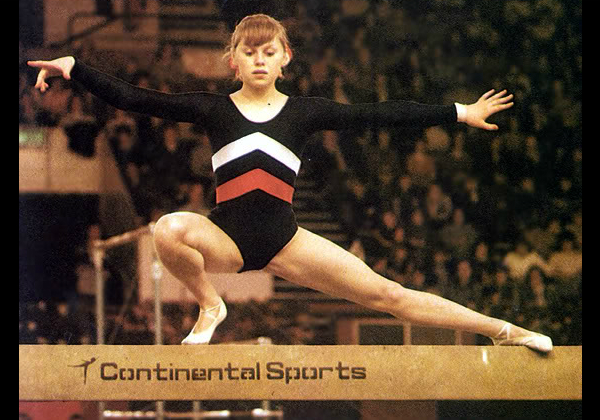 As we patiently await the Worlds of 2017 later in the year, I am already hearing so much about the Road to Tokyo.  While the Olympics are what we, as gym fans, are ultimately waiting for, there are many competitions and gymnasts who will stand out between now and then.

The List takes a look at gymnasts who were stars during their quad, even if just for a year or two.  Some made the Olympics; others did not.  Nonetheless, they made an impact for their country and the sport, and they deserve to be highlighted!

One of the stars to emerge from the 1978 World Championships, Frederick inspired a generation of gymnasts after her who believed it was possible for strong American results on the international scene.  After finishing in 9th place at the junior US Nationals in 1977, she jumped to fifth in seniors the following year.  But what really catapulted her onto the Worlds team was her major scores on uneven bars—she finished eight tenths ahead of her teammates!  Armed with a 9.850 in both compulsories and optionals at trials for Worlds, Frederick stunned the crowds in Strasbourg, France with her routine, where she introduced a skill that is practically standard now: a stalder-full pirouette.  She placed 20th in the all-around, and won the title on bars, becoming the first World Champion on the women’s side for American gymnastics.

In 1979, Frederick was injured and only placed 19th at US Nationals, but she once again won the bars title (tied with Tracee Talavera).  She improved to 7th at trials for Worlds, and scored 9.950 (compulsories) and 9.900 (optionals) on bars.  Still hampered by injury, she placed 23rd in the all-around (after an uncharacteristic fall on bars), and 6th on her pet event.  As the 1979 Worlds were held in the United States for the first time ever (Fort Worth, TX), Frederick still gained legions of fans who were thrilled to see the champion compete in person.

Other career highlights include: 3rd American Cup (1980); 1st Caesar’s Palace (1980); 1st Golden Sands (1978).  Frederick placed 4th at Nationals in 1980 and 3rd at Olympic Trials; unfortunately, the United States boycotted the 1980 Moscow Games, denying Frederick the opportunity to become the first American woman to win in Olympic medal in gymnastics.  Nonetheless, her name was amongst the best of the best in the post-Nadia era!

Helping the USA team finish an impressive fifth in 1978, Frederick gave a handstand clinic and scored 9.850:

The original star of the Belarussian team following the breakup of the Soviet Union, Piskun persevered in a quad full of legends.  In 1993, she surprised everyone when she beat out reigning Olympic champion on vault, Lavinia Milosovici, with her strong (and relatively uncommon) double twisting Yurchenko for the world title.

Despite the fact that her home gym was ill-equipped, Piskun regularly showed up to competitions with some of the best skills: Delchev and full in layout on bars, back handspring to full on beam, and whip through to triple twist on floor.  While she lacked the grace of her best friend, Ukrainian Lilia Podkopayeva, Piskun’s name regularly made the top 10 in the all-around and many event finals. Some career highlights include: 1st Gander Memorial (1993, 96); 3rd UB Goodwill Games (1994); 1st Golden Sands (1995), 1st Australia Cup (1996); 1st Catania Cup (1996); three top ten finishes at the World Championships, and two European medals.  In addition to her World vault title in 1993, Piskun also tied Khorkina for the World title on bars in 1996.  A member of the 6th place team at the 1996 Olympics, she placed 12th in the all-around.

Piskun continued to compete into 1997, but retired soon after Worlds.  While her name may get lost amidst the list of legends she competed against, her accomplishments are to be lauded!

The Delchev I live for:

Furnon had shining moments from two different quads.  First, in 1995, she was the replacement athlete for Shannon Miller on floor during event finals.  Her dynamic routine with excellent tumbling and choreography placed her on the podium, which was the French women’s first world medal.  Adding that impressive feat was the fact that she only began training in gymnastics three years earlier!

After competing at the 1996 Olympics (5th team, 19th all-around), Furnon continued on, making regular appearances in event finals at the World Championships, World Cups, and European Championships.  A major player on a French team that was on the rise, her key win came at the 2000 European Championships, where she won the floor title in front of a home crowd.  Her electric performance put great hopes on Furnon, who unfortunately was unable to compete at full potential in Sydney, only contributing on bars to her team’s eighth place finish.  Though her second Olympics weren’t all that she hoped for, she was a mainstay on the world stage, as well as a key player on a rising French team.

Ever the personality on floor, Furnon wows the crowd at the 1996 Olympics:

The inspiration for this List: as I was re-watching both 2001 Worlds and 2002 Europeans, and Ziganshina was ON!  The apparent apprentice of Svetlana Khorkina, who was making a run for her third Olympics, Ziganshina was the new, young Russian with her own brand of skills (including a split leg double layout dismount on bars).  Second in the all-around (to Khorkina, ahead of Andreea Raducan), Ziganshina was strong and steady on all four events.  A favorite at the following Europeans, she unfortunately fell on beam and finished 4th all-around.  But she came back and won the vault title and silver on floor.  She also won a silver on vault at 2002 Worlds.

While 2003 turned out to be a tough year for her (basically imploding during prelims at Worlds and not making any finals), she won vault and placed third on floor at the Test Event.  She was part of the bronze medal winning team at the 2004 Olympics, where she contributed on bars in team finals.  While she was largely overshadowed by Khorkina, Pavlova, Ezhova, and Zamolodchikova in the last years of the quad, Ziganshina was a major player early on as a part of the post-Sydney story.

A two-time Olympian, Tsurumi was the stand-out of a Japanese team that went from minors to majors in terms of their international presence.  While the men’s team from Japan has a long and storied history, the women struggled to make their mark.  At the 2008 Olympics, the team finished a very impressive fifth, making team finals for the first time in the optionals-only system (and this was after not making team finals at any of the previous Worlds).  Tsurumi was the only finalist in the all-around (17th) and event finals (8th on beam), and the first event finalist since 1984 for Japan.

At the 2009 Worlds, amidst the battle between Bridget Sloan and Rebecca Bross, Tsurumi turned in a powerful performance to claim bronze in the all-around.  She also qualified for two event finals, winning silver on bars.  These medals ended a 43-year drought for Japanese women at Worlds!

These are great results from a gymnast who helped turn a team’s program around.  Especially impressive was her ability to make two Olympic event finals (2008 beam, 2012 bars), as well as helping her team became a mainstay in international competition after decades of minimal impact.

Showing supreme mastery of the event, Tsurumi had the third highest beam score during the all-around at 2009 Worlds:

Okay, is this too obvious?  After all, who doesn’t know and love Iordache?  But after an injury-ridden 2012 Olympics during her first year as a senior, Iordache was all over the quad (in a good way!) leading up to Rio.  After the Romanians failed to qualify as a team for 2016 and Iordache needed hand surgery, she was left in the alternate position when the Olympics finally rolled around.  Few could imagine she would not be on the floor in Rio, but fortunately we have her years of success and triumphant moments to celebrate (as well as her recent comeback)!

Heralded as the next ‘new Nadia’ after a stellar junior career, Iordache won a bronze with her team in 2012, and placed 9th all-around and 6th on beam (again, dealing with injury).

Iordache came roaring back in 2013, placing second all-around at Europeans and fourth at Worlds (after a fall on beam), where she won the bronze on floor.  She improved this status in 2014, winning silver in both the all-around and floor, and adding her name as one of the gymnasts who might be able to overtake Simone Biles.  Unfortunately, the 2015 Worlds qualifications were a disaster for Romania, and Iordache failed to make any event finals.  She did experience major redemption with a bronze in the all-around, reducing all spectators to tears of joy when she realized she would be on the podium.

With her dramatic Ramayana music, Iordache won her first World medal with this routine:

As I try to have a diverse list (both in terms of countries and time frames represented), there are plenty of others who worthy of mentioning, but I ran out of room!

From the USA, Chellsie Memmel, Jana Bieger and Rebecca Bross for sure (thanks @raganbeadbucket for those mentions). So many Romanians (i.e. Porgras) and Soviets/Russians (i.e. Fabrichnova) who I have hopefully highlighted in other posts.

And certainly many more: share your favorite (other) stars of the quad in the comments!