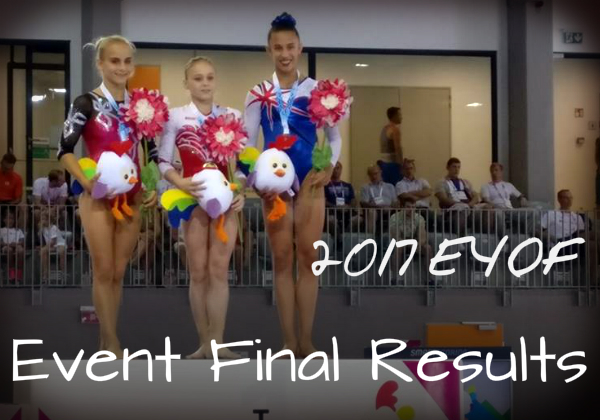 Russia and Italy continued their rule of the European Youth Olympic Festival  winning together 8 out of 12 possible medals in the event finals, which took place Friday and Saturday in Gyor.

On vault Valeria Saifulina thew a Yurchenko double full and a Yurchenko 1 1/2 for a final score of 14.149. She was followed on the podium by Denisa Golgota from Romania. Golgota had the best Yurchenko double full of the day followed by a Tsuk full. Italy’s Asia D’Amato had two difficult vaults (DTY and Lopez) but was penalized for execution and finished 3rd with an average of 14.016.

Elisa Iorio hit a superb bars routine in the final with Ricna to Pak, Chow to Bail to Ray,  Endo full to L grip pirouette  to double front half dismount for a 14.1/6.0. She was followed but Klimenko, who although two tents lower in difficulty, she had interesting combinations of her own: van Leeuwen, pirouette in L grip to pike Jaeger to Pak, Chow II to inbar Gienger, double front half out dismount (14.06). Asia D’Amato finished third with a good routine but with more visible execution errors compared to the fist two (Ricna, Tkachev to Pak, Chow to Bail to Ray, double front dismount for 13.333/5.5).

There are not many routines out there but you can find interesting stuff on this youtube channel.

2017 EYOF: Team Final and Qualifications Results
2017 EYOF: All Around Results